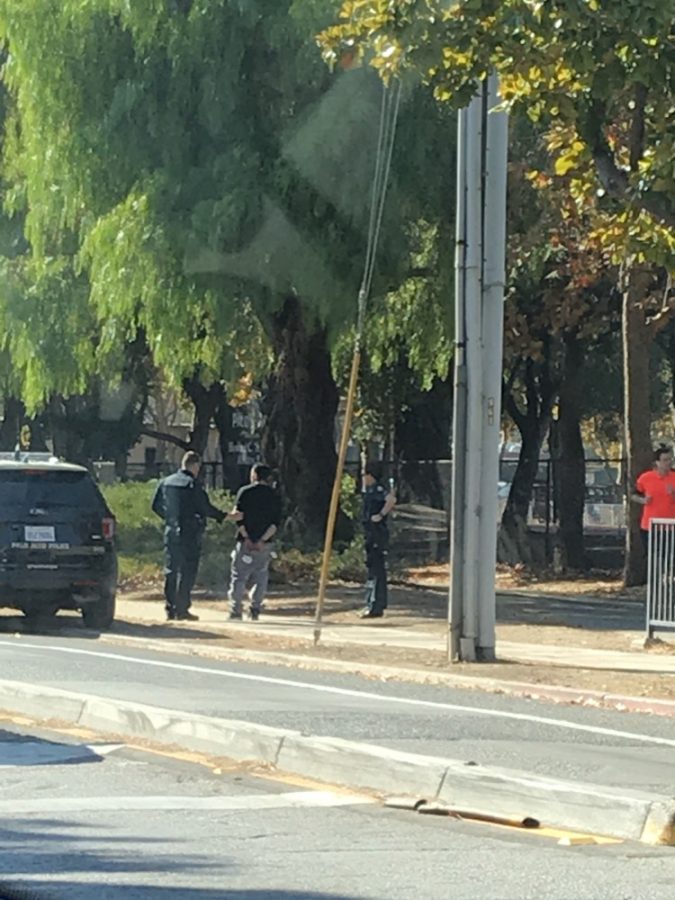 A rattled student body is reflecting on campus security issues after a wild police chase just after noon today at Palo Alto High School that left an officer injured and a robbery suspect in cuffs.

According to the Palo Alto Police Twitter feed, a man fleeing after a Stanford Shopping center bank robbery entered the Paly campus around 12:10 p.m.

According to The Campanile, the man entered the library to ask where the restroom was.

A reporter for The Paly Voice (Ria Pai) saw the man, wearing a black sweater and pants, walk into the boys bathroom right outside of the library, carrying a wad of cash. The police officer immediately arrived in a golf cart and ran into the bathroom, but the man managed to dodge the officer and exited the building, running towards the 800s building.

The City of Palo Alto press release stated that the robber was later arrested on the bike path behind campus at 12:16 p.m.

While all of this was happening, Paly campus security hurried around telling students to quickly enter a classroom and lock the doors or run towards Town and Country. Some classrooms were in lockdown, while others were unaware of the situation, senior Caroline DeBruine said. Around 10 minutes later, there was an announcement that the campus was clear of any threats and classes should resume as usual.

“No one knew what was happening, so we just started class until the announcement came, and then my teacher said she was going to send admin an … email because they handled the situation very poorly,” DeBruine said.

After the chase, students saw an injured Palo Alto Police officer being carried away on a gurney in front of the 800s building.

According to senior Anna Tomz, her fifth period class was locked out of their classroom before the bell rang and they witnessed the injured officer outside the 800s building.

“We saw someone lying on the ground and not moving,” Tomz said. “It was really scary because he looked like he was dead and then [campus supervisor] Ernesto [Cruz] ran by on the first floor of the building, yelling at everyone to get inside right away.”

Many students thought there was a school shooter on campus, senior Samantha Pao said.

“I just so happened to be on the phone with my friend and she started telling me that ‘something’s happening,’” Pao said. “I heard people running in the background and that’s when I started freaking out because I thought there might be a shooter on campus. I ran to [math teacher] Ms. [Cynthia] Chen’s room to tell her something’s going on. Me and Ms. Chen locked the door and closed the blinds.”

Some students were left alone during the event as their teachers were not around.

“I was in my art classroom without a teacher,” senior Kimberley Martinez said. “I just took charge and told them [the other students] to put the blinds down and make sure the doors were locked and closed and to hide in the art closet in the back.”

Principal Adam Paulson stated in a Schoology post that students can visit the Wellness Center if they want to talk about the police activity that occurred today.