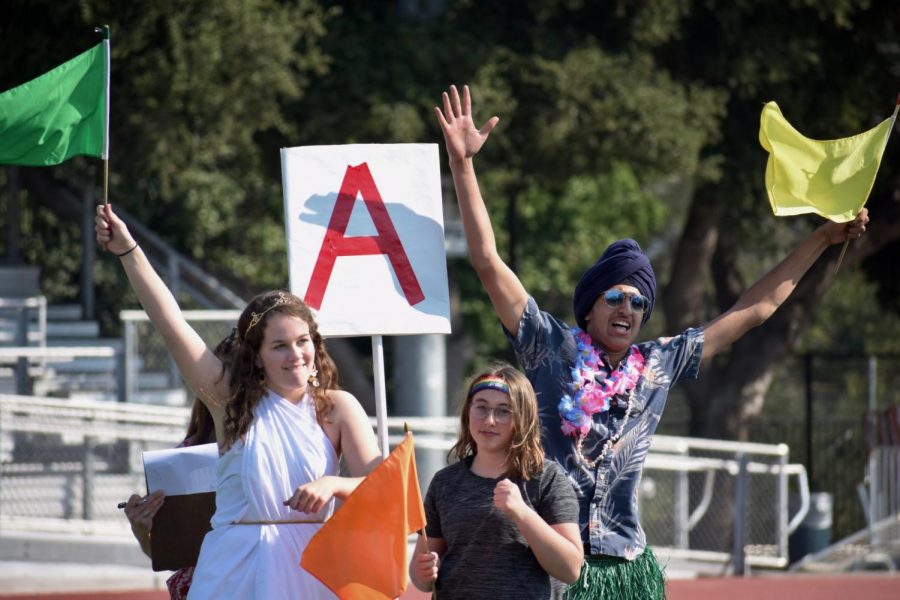 As spirit week continues, students dress up to match their class salad dressing on Day Two, along with the lunchtime rally which included the first annual Paly Trivia game, and an additional rally during tutorial.

Additionally, there was a rally during tutorial where each grade level competed in Hungry Hungry Hippo and Wrap Your Vice President.

Paly Trivia, a new game this year, had students representing their grade by running to poles marked with answer choices for Paly-related questions. The ring toss involved pairs from each grade tossing an inflatable inner tube over each others’ heads. Hungry Hungry Hippo included three students from each grade working together to get the most balls in their respective bucket.

Juniors earned third place on the Spirit Week scoreboard after Tuesday. They ended the day with 7000 points, and sophomores with 6000 points, earning them second place. The freshmen ended in fourth place with 4700 points. However, the Class of 2023 beat the Class of 2022 in Paly Trivia and cheers.

There were, however, some point deductions at the end of the day. The Class of 2020 was docked 50 points for sportsmanship during the tutorial rally, an issue that the grade experienced last year as well, and the sophomores were docked 50 points for cleanliness after the lunchtime rally.

Despite the point loss the sophomore class experienced, they haven’t lost any hope or spirit, according to sophomore Giada Parigi.

“I think we really worked well as a grade to improve our cheers and overall spirit,” Parigi said.

Today’s Spirit Week theme is Class Colors; students came decked out in the traditional colors of their grade level. Freshmen wore orange, sophomores in red, juniors in yellow and seniors sported the Viking green. The lunchtime rally featured the giant corn hole game. As always, points were awarded for the Best Dressed of each grade. Thursday’s theme is generations and will have freshmen dressing up as babies, sophomores as greasers, juniors as sophisticates and seniors as senior citizens.