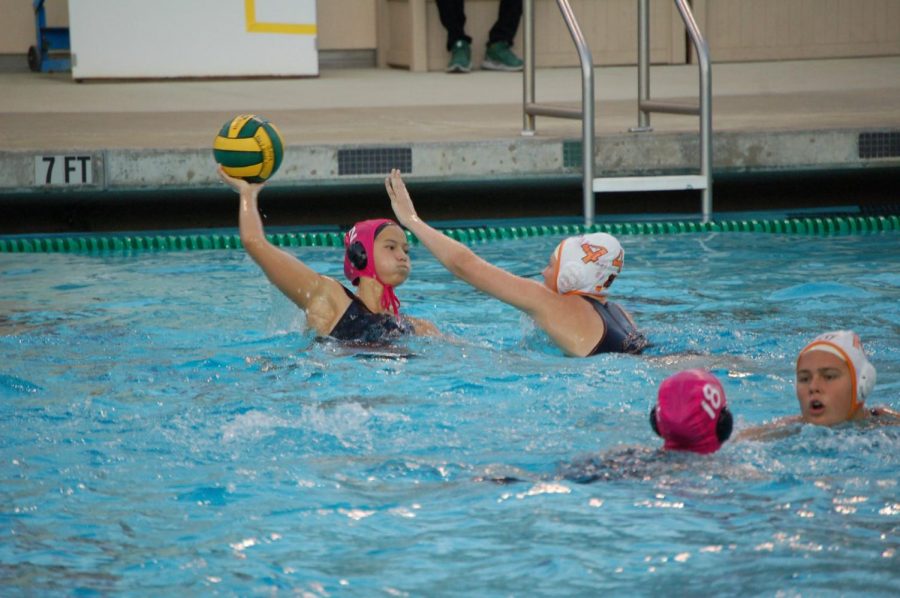 Senior Alexandra Lee prepares to pass the ball over a Los Gatos defender. The Vikings lost the match 8-3 after their coach was fired. “I just wanted to play,” senior Alexandra Lee said. “We’ve had a lot of stuff going on and I was just ready to put it all behind me and come out and play.”

Most of the Vikings wore pink caps to demonstrate their frustration with the school’s decision to fire their coach, Doug Stotland, mid-season.

“Paly disrespected our team when they fired our head coach a few days before senior night,” senior Chesnie Cheung said. “We just want justice for our team.”

Parents and coaches supported the players’ demonstration by wearing pink shirts to match their caps. The water polo team also passed out a signed letter explaining their dissatisfaction with the district’s choice to fire their coach without public explanation.

Not all the players agree on the issue, as some players were supportive of their coach being fired.

“There’s a lot of different opinions on it, and I think it’s really divided the team,” junior Andie Tetzlaff said.

According to Athletic Director Nelson Gifford, the district is not allowed to release details regarding why Stotland was fired.

“There’s personnel laws that surround any hiring or dismissal,” Gifford said. “I can’t tell you why we hired somebody, why we fired somebody, or why someone left.”

The Vikings said they did not let the administration’s decision distract them from their game, but lost nonetheless.

Los Gatos quickly took the lead in the first period, scoring within the first minute. Shortly after, junior captain Lulu Gaither scored a goal before the Wildcats scored again.

Los Gatos continued to dominate over the Vikings in the second period with stellar offense and defense, scoring two goals to the Viking’s one goal scored by Cheung, leaving Paly trailing 5-2 at the half.

In the third period, Los Gatos increased their lead with another goal. But Paly fought back with senior Alexandra Lee scoring the Vikings’ third and final goal of the game. Despite many blocks from Tetzlaff, the Wildcats snuck in another goal before the end of the third period.

Throughout the fourth period, the Vikings found themselves unable to score despite their many attempts. On the other hand, the Wildcats kept up the offensive pressure, scoring and sealing the game, 8-3.

According to Tetzlaff, though the impact of the absence of their head coach was significant, she did not think it affected how they played.

“I think him not coaching us was a little weird, but honestly I think we played better as a team than the last time we played them [Los Gatos],” Tetzlaff said.

Despite the chaos brought by the end of the league season, the many of Vikings still look back at the season in a positive light.

“I think we’ve come a long way,” Lee said. “We’ve had our ups and downs, but I’m really proud of how far we’ve come as a team.”

The Vikings’ will play Moutain View in a league tournament this week at Los Gatos High School Tuesday.