Behind the scenes of Paly Athletics with Justine Iongi 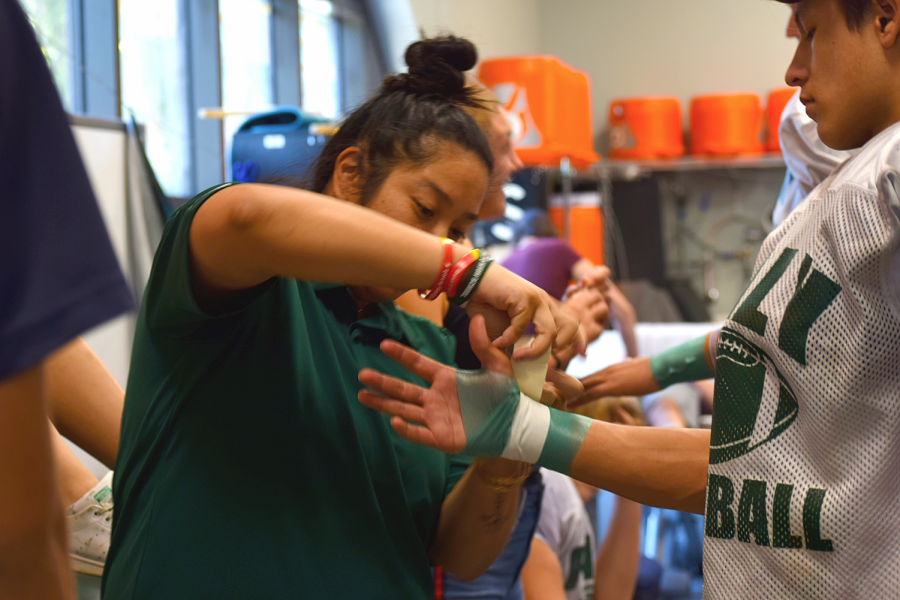 The Palo Alto High School Sports Medicine room is bustling with students at the end of the school day — football players relax in chairs, donning their jerseys as their ankles are wrapped in bandages, volleyball players stretch on foam rollers, and field hockey players grab water bottles to prepare for their game. Athletic Trainer Justine Iongi sits in the middle of the chaos.

“We do strengthening, helping everything, rehabilitation,” Iongi said. “If there is someone who sustains an injury, we help them with any treatment that they need.”

Iongi evaluates athletes that come in with an injury they can’t identify or treat by themselves, referring athletes to doctors when necessary. Each athlete has a different treatment plan that Iongi and her assistants monitor.

At practices and games, Iongi is there to assist student-athletes and offer her expertise in case of an emergency.

“I’m there on the sidelines for most of the sports that we have depending on what’s going on,” Iongi said. “So on top of injury prevention, regular rehab for injuries already [sustained], I also do triage emergency, on-scene, on-field care.”

Students and coaches alike come to Iongi looking for help.

Each season, Iongi oversees over 400 student-athletes, totaling over 1250 students per year. Because she gets so busy, both college students and Paly students lend Iongi a hand.

“I reach out to San Jose State, and students can intern so they shadow and learn basic skills,” Iongi said. “I have student-athletes that, when they’re not in season, help me. … And then I have other students who were in here before for their particular thing, but they have seen what goes on here like, ‘I’m pretty interested.’ They hung out to help out and learn more.”

The seniors graduating this year will be the second year of students that she has treated for all four years of their high school athletic career.

“It’s been so rewarding, seeing them grow not only as a student, as an individual themselves, but also as an athlete as well,” Iongi said.

“I think it takes a special person to work in high school. You have to love your job, you have to love being around different aged kids,” Iongi said. “This is the time where they are growing as an individual, learning about themselves.”

She said that she greatly enjoys getting to know each student while she treats their injuries.

“The biggest thing of being an athletic trainer is when you see somebody at their lowest because they’re at their injury, and it’s pretty rough,” Iongi said. “But then you work with them, you see them every day and see how dedicated they are, and you work with them until they’re back to their playing potential. And they’re excelling in their sport, that’s the most rewarding.”

In addition to treating students, Iongi also does administrative work for school sports.

“I clear all the students — I make sure they have updated physicals and make sure they have current emergency contact information, and I compile emergency contact binders for the coaches, so when they travel, they have all the information they need,” Iongi said. “Also, if there are athletes with special conditions — Type 1 diabetes, like seizures, or anything that the coach should be aware of — I let them know.”

According to Iongi, her job extends to more than just physical injuries. Iongi keeps the Sports Med classroom a safe space for all students and tries to make everyone feel welcome. Athletes who graduated at the beginning of Iongi’s career at Paly are still coming back to visit, Iongi said.

“The biggest thing for me is you have an impression on all the students,” Iongi said. “The smallest thing makes a difference, just being kind.”

Athletes who graduated at the beginning of Iongi’s career at Paly are still coming back to visit, Iongi said.

“They’re like 21-22, they’re still coming back … just to say hello,” Iongi said. “That just makes me feel like as staff here at Palo Alto that I’m building a sense of community, and also that I’m doing something right.”