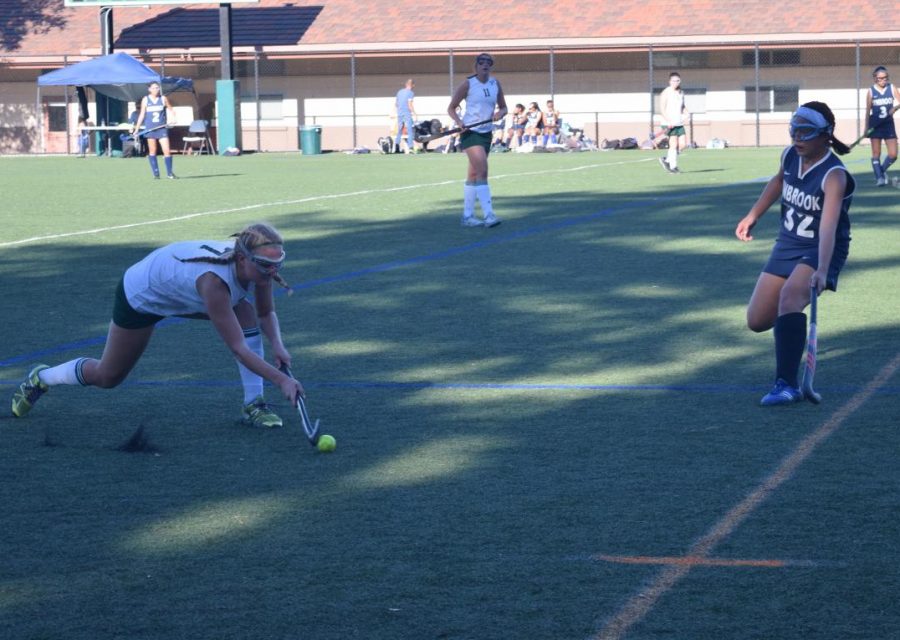 Senior Emma Siskens prepares to sweep the ball past a Lynbrook High School defender at the Palo Alto High School Girls’ field hockey senior night Tuesday. The Vikings (3–2–3) fell behind Lynbrook (1–4–1) early in the match, but scored three goals within the last six minutes of the game to win 3–1. “It's a new sport and most of us haven't played it, and that can be kind of frustrating,” Siskens said. “But [I’ve learned] to keep trying and not give up.” Photo: Sophia Krugler

In its first-ever senior night, the Palo Alto High School girls’ field hockey team (3–2–3) clinched the victory against Lynbrook High School (1–4–1), scoring all three of its goals in the last six minutes of the game Tuesday at Paly.

Although Paly was able to keep the ball on Lynbrook’s side for much of the second half, time was running out, and the Vikings had yet to score. With 12 minutes left in the game, junior Alexa Gwyn drove the ball toward the goal until it was inches from the goal line. However, Lynbrook was able to clear the ball, and the score remained 0–1.

“We were so close to the goal,” junior Madeline Lohse said. “We could feel it in our bones.”

With less than six minutes left in the half and still trailing by one, Lohse pushed the ball in front of the goal to sophomore Natalie Hmelar, who sent the ball into the back of the net to tie the score. From there, the Vikings took control of the game.

Only two minutes later, Paly took the lead with a goal from freshman Kellyn Scheel, assisted by Gwyn, bringing the score to 2–1. With one minute and 30 seconds left in the game, a goal from sophomore Phoebe Kim secured the victory for Paly.

Senior Emma Siskens said that even as time was running out for the Vikings to catch up to Lynbrook, she wasn’t focused on the score.

“I was just thinking, it doesn’t even matter if we win or not, as long as we play our best,” Siskens said. “As long as when I leave here that I’m satisfied with how we played.”

The Paly girls’ field hockey team was founded two years ago, but with no seniors on the roster last year, Tuesday’s game against Lynbrook marked the team’s first-ever senior night.

“We’re a young program,” Crane said. “I see them [the seniors] as foundational pieces of what this program is going to be in the future.”