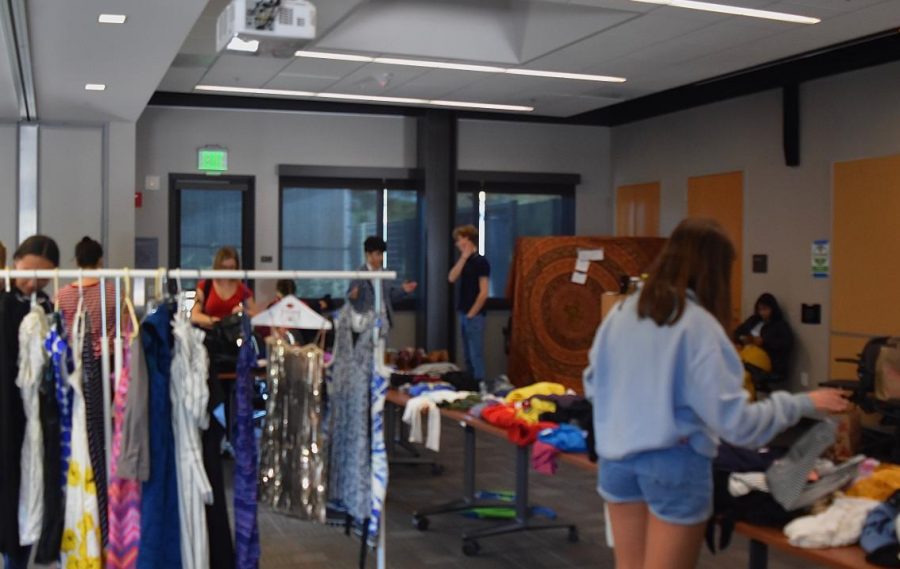 The Palo Alto Teen Arts Council hosted its bi-annual clothing swap at the Mitchell Park Community Center Adobe Room on Saturday, with a follow up of the event scheduled for the end of February.

According to TAC secretary Emma Cudahy, the clothing swap, like other TAC events, has taken place for a long time and evolved quite a bit over the years.

“A lot of Teen Arts Council’s events are things that people created a while ago,” Cudahy said. “The original idea for this event was to have an event that’s more oriented towards fashion,” Cudahy said.

Anyone can participate in the swap, as long as they bring clean, used clothing or contribute a donation of at least $1. Participants are allowed to swap as many clothing items as they bring, or if they donate money, are expected to only take a couple of items. All money donations collected at the event go towards funding future TAC events, according to Cudahy.

In addition to being an engaging, and fashion-oriented event for teens, the clothing swap also aims to make people more aware of the negative environmental effect buying new clothing has, according to TAC treasurer Anna Hickey.

“The goal is to help teens find an environmentally conscious way of shopping while meeting new people and helping the community through their donations,” Hickey said.

According to Hickey, all of the clothing that is not “swapped” by the end of the event is donated to the Goodwill.

All the events TAC plans throughout the year are geared towards art in some way. The council hosts a variety of events including open mic nights, poetry nights, and the beginning of summer music festival, “Buoyancy.”

Although the clothing swap does not have as big of a turnout as other TAC events, the small number of people that attend allows for it to be more laid back. The council is not anxious to attract a huge crowd to this event, but as always, the more the merrier, according to TAC co-president Max Rosenblum.

“We plan for it to be a more low-key, chill event versus our bigger events,” Rosenblum said.

Unlike other TAC events, the clothing swap does not involve performing or artistry, making it an event that is well suited for everyone of all skill sets.

“It [the clothing swap] is accessible for a lot of people that come, even if you’re not an artist.”

The next clothing swap will take place at 7 p.m. Feb. 29, at the Mitchell Park Community Center, although the time and location are subject to change, according to Cudahy.