Examining the removal of American Lit 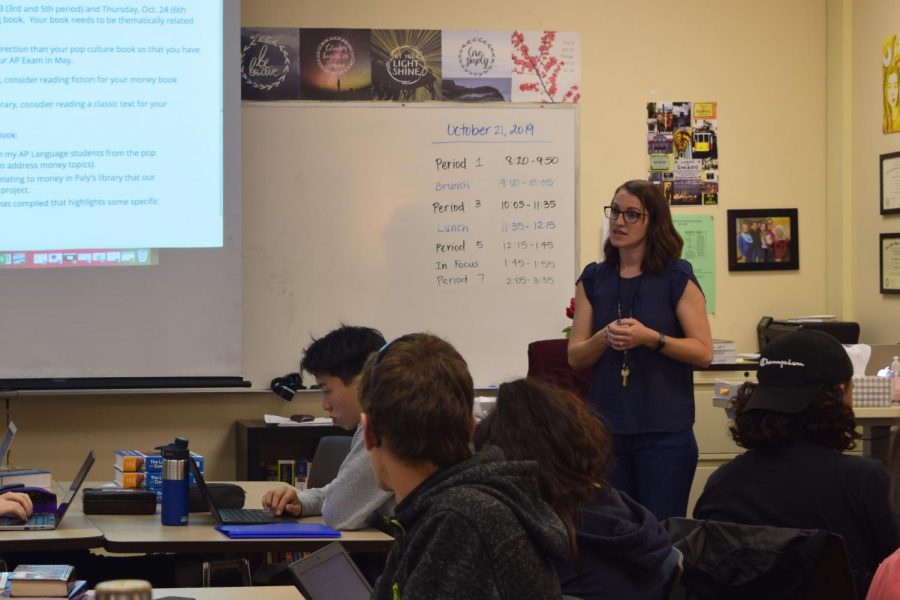 The compromises of the removal of American Literature 11H by the English Department at Palo Alto High School due to the success of the Advanced Placement English Language and Composition pilot for juniors and seniors during the 2018-19 school year are coming to light as the school year progresses.

To accommodate for the arrival of AP Lang, the English Department removed American Lit 11H, the prior highest lane English class for juniors, during the 2018-19 school year; American Lit remained as an optional elective.

Shirley Tokheim, Instructional Leader of the English Department, stated in an email that this decision was made to minimize the impact of AP Lang on the popularity of other semester-long electives.

“I think the decision that department made to not make American Lit and World Lit required classes anymore is, long-term, a really exciting decision,” AP Lang teacher Melissa Laptalo said. “It opens up our elective program and allows students to take more electives, which is something that’s really important to us as a department and also simulates a college.”

For the 2019-20 school year, the English Department removed American Lit altogether, along with World Literature, the previously required English class for seniors.

“Last year, we surveyed most sophomores in their English classes about which English electives they’d most be interested in signing up for for their junior year,” Tokheim said. “The list included American Lit and World Lit, which used to be required courses. Those two courses were at the bottom of most students’ ranking, so we decided not to run them this year.”

AP Lang is likely here to stay; with 14 classes of enrollment, it is an extremely popular class at Paly.

“AP Lang is more representative of the kind of reading and writing that students do in college than anything else that we teach, across majors,” Laptalo said.

According to Sarah Bartlett, one of two AP Lit teachers, the addition of AP Lang has upped the enrollment rate in AP Lit. In past years, there were only two to three sections, but this year there are four. She thinks that students who received AP experience in 11th grade and were successful felt confident enough to continue on to AP Lit.

AP Lang also offers students the experience of taking an AP English test. Bartlett said that despite the two tests being completely different in content, students who took AP Lang will likely be more comfortable in the exam situation; before the change, students had to wait until senior year to have an AP English exam experience.

Bartlett said that the difference between AP Lang and previous American Lit 11H students is the semester of intense focus on fiction, as analyzing nonfiction requires a different set of devices and skills; rhetorical devices are hugely different from symbols and motifs.

Another compromise made was that AP Lang students did not have the opportunity to read plays and books commonly read in American Lit. Bartlett said that she and the other AP Lit teacher, Richard Rodriguez, decided to assign The Great Gatsby and The Crucible as summer homework for incoming students to supplement the literary classics that wouldn’t be covered otherwise. However, replacing the summer assignment means that the short fiction stories that were typically assigned had to be skipped.

Both Bartlett and Rodriguez agree that in a perfect world, they would like AP Lang students to receive both the fiction and nonfiction experience.

At other high schools around the Bay Area that offer AP Lang, they have a different solution to bridging the fiction and nonfiction gap: students have the opportunity to explore both fiction and nonfiction books. According to Lynbrook High School senior Rin Ha, AP Lang students analyze classical literature such as “The Great Gatsby,” “Huckleberry Finn,” and “Scarlett Letter.” Mountain View High School’s AP Lang syllabus states that students will read dystopian fiction novel “Brave New World.”

However, Laptalo said that she does not see a need for a focus on fiction in AP Lang.

“The nonfiction stuff is new for students,” Laptalo said. “There are enough moving parts there that you have plenty to do for the year to get prepared for the exam.”

Paly’s AP Lang is focused on nonfiction, geared towards preparing students for the AP Lang exam in May.

“Everything that I have studied about the class has indicated that truly the course is meant to be a nonfiction class because AP Lit is the fiction counterpart,” Laptalo said. “One of the only places [on the exam] that fiction might have been relevant is on the argument essay when you can bring in your own evidence.”

To supplement the argument essay, Laptalo said that she encourages students to pursue classical literature through their own choice of outside reading books.