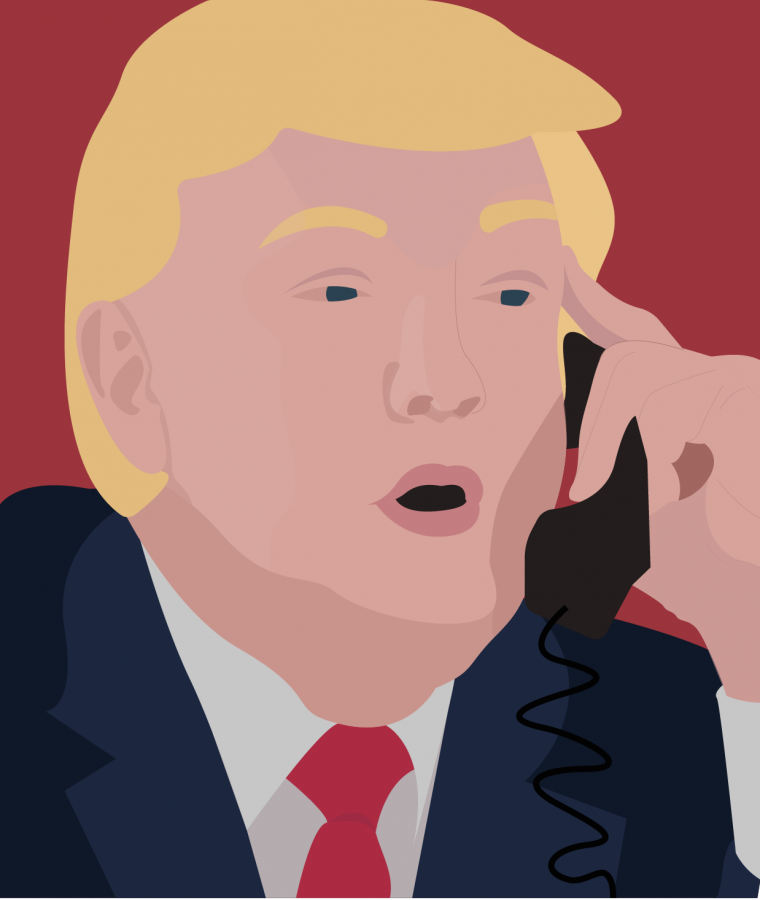 Suspicious phone calls. Misuse of the Oval Office. Attempts at election manipulation. What comes to mind?

Until recently, many might have said the Watergate scandal, Richard Nixon’s infamous attempt at fixing the election of 1972.  However, as rough transcripts of President Trump’s phone calls with President Volodymyr Zelensky of Ukraine were made public late last month, the answer could be changing. The transcript suggest Trump and other White House officials pressured Zelensky into foreign interference of the upcoming 2020 election. The uncanny resemblance of history repeating itself is hard to ignore.

The Watergate scandal, named after the office complex in Washington D.C. that was home to the Democratic National Committee, started with five burglars breaking and entering the DNC headquarters in an attempt to steal election information from the Democratic Party. As the details of the scandal came to light, investigators discovered that Nixon recorded many of the goings-on in the Oval Office, a move that was intended to ensure a faithful account of conversations but eventually led to his downfall and resignation.

The move that may possibly lead to the downfall of President Trump? The surfaced conversation with President Zelensky in which, critics say, Trump used the Oval Office for his own political gain when he requested that Ukraine investigate Democratic candidate Joe Biden’s family. This resulted in Speaker of the House Nancy Pelosi announcing the launch of a formal impeachment inquiry.

As widely reported in the press, the allegations first surfaced when a “whistleblower” complaint was received on Aug. 12 which stated that the anonymous sender had heard from many government officials of illicit activity.

Similar to what happened to Nixon’s tapes during Watergate, the White House tried to restrict access to these transcripts and stifle public knowledge of the situation and records of  the Trump-Zelensky conversation were “locked down,” according to the complaint.

According to the whistleblower, “White House officials told [the whistleblower] that they were “directed” by White House lawyers to remove the electronic transcript from the computer system in which such transcripts are typically stored,” suggesting there was a motive and a reason for this phone call to be kept confidential.

During the Watergate scandal, the secret informant known as “Deep Throat” was for a long time the sole source of everything Watergate. Deep Throat, later revealed to be FBI Associate Director Mark Felt, confided in Washington Post journalist Bob Woodward about the confidential wrongdoings of the Nixon administration. This new Trump situation has led many to wonder if the whistleblower of the conversations between the US and Ukraine will be the new Deep Throat.

Many find it puzzling that these top-secret phone calls and meetings were recorded in the first place, but for a president it’s not an unusual practice.  Nixon’s predecessor Lyndon B. Johnson had a recording system in the Oval Office, as did John F. Kennedy and Franklin D. Roosevelt. But in the cases in which these recordings have come back to bite these presidents, the full release of recordings has been an issue.  It started with the peculiar 18.5-minute gap in one of Nixon’s tapes and ended with the “Smoking Gun” tape which Nixon was forced to release after much protest due to Supreme Court orders.  Now, critics are finding gaps in the Trump-Zelensky transcript, causing suspicion.

As all of this unravels before our eyes, people can’t help but speculate what might happen next.

While Nixon is primarily remembered for Watergate and the Pentagon Papers, he was also responsible for the Environmental Protection Agency and smoothing relations between America and China. Following the Watergate scandal was, of course, an impeachment inquiry similar to the one Trump is currently facing.  Nixon, realizing he had lost all chances of reelection, resigned as president before he was impeached.

But the difference between Nixon and Trump is character. Trump’s stubbornness and lack of respect for the government throughout the 2016 election and the first two years of his presidency have shown that he is very unlikely to resign to matter how far the impeachment process goes.

But as satisfying as it might be for Democrats that after nearly three years of the Trump Administration in power an impeachment inquiry is finally underway, there is a minuscule chance that it will get the two-thirds Senate majority needed to pass, considering the current Republic majority in the Senate.

In fact, the existence of the inquiry could actually boost Trump’s support and his likelihood of getting re-elected. His fundraising has increased since Pelosi’s impeachment announcement, according to National Public Radio. If the Republican Party paints him as a victim, current supporters will likely feel more strongly for him and undecided voters will likely choose to side with the candidate made seen as the victim.

In the event that he is not re-elected but another Republican is (yes, there are actually three other Republican nominees), would the hypothetical Republican winner issue a presidential pardon as Gerald Ford did for Nixon after his resignation if the allegations are proven?

Since Republicans have the majority in the Senate, they will likely be fighting very hard to keep their control over the government, and with so many Trump supporters in the party, it’s unlikely any other Republican candidate has a chance.

This essentially brings the bid for the election of 2020 to a race between Trump and the last standing Democrat. Will the Democratic Party become organized enough stand behind one candidate by the time primaries come around or will the world get to watch history repeat itself in a Watergate 2.0?