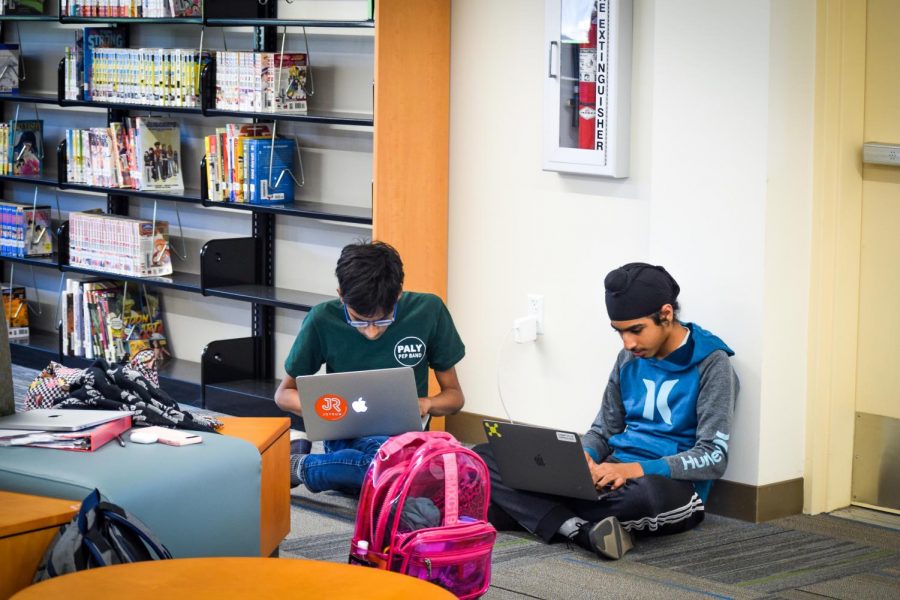 Plumbing issues in the Palo Alto High School library have led to the closure of the library collaboration rooms and have affected students’ ability to print in the facility.

Librarians noticed the leak roughly three weeks ago on Aug. 29, according to librarian Sima Thomas.

“First, we thought someone had spilled a water bottle,” Thomas said. “And then it got bigger and bigger — and then the carpet was totally soaked.”

Though a maintenance staff from the district came the same night to investigate, the crew has not been able to do much other than lay down blue tape to trace where the pipes are, Thomas said. The air conditioning has been off since to prevent a further leak and caused both collaboration rooms to close.

“I’d love to get the rooms back open right now, but they’ve turned all the air off in there,” Thomas said. “They’re just really stuffy.”

Assistant Principal Jerry Berkson said that the plumbers are still in the process of assessing the situation, and so far the leak seems to be from the original pipes that were in place before the library’s recent recent renovation.

“The new construction people are saying it’s from the old stuff [pipes],” Berkson said. “So now they have to get another plumber to get a camera in there to see exactly where it is in the plans because the old plans don’t match up with what’s really there.”

Given that the rooms have been closed for over three weeks, the issue has upset many students who use them to collaborate on projects.

“It’s really uncomfortable to have to sit on the ground to charge your computer while working on a project with my friends,” sophomore Ronak Monga said.

The leak seems to have affected everyone who uses the library, not just those who wanted to use the collaboration rooms.

“Sometimes there’s a bigger group of students who come into the library, and they’re studying, but they also want to talk,” Thomas said. By working in the collaboration rooms those students can help to keep the outside noise level down.

In addition, the leak has caused the computers near the collaboration rooms to close as the maintenance staff works on the issue, causing students to wait in long lines to print. The librarians have since made available two more computers connected to the printer to divert traffic, but librarians believe that the leak may have uncovered a larger printing problem at Paly.

“It would be nice to have at least two places [where students may print],” Thomas said. “Because sometimes our printer breaks, and then it’s just totally offline. Then people don’t know where to print.”

“The issue will be resolved as soon as possible,” Berkson said. “It’ll be much easier when we know what the exact problem is.”