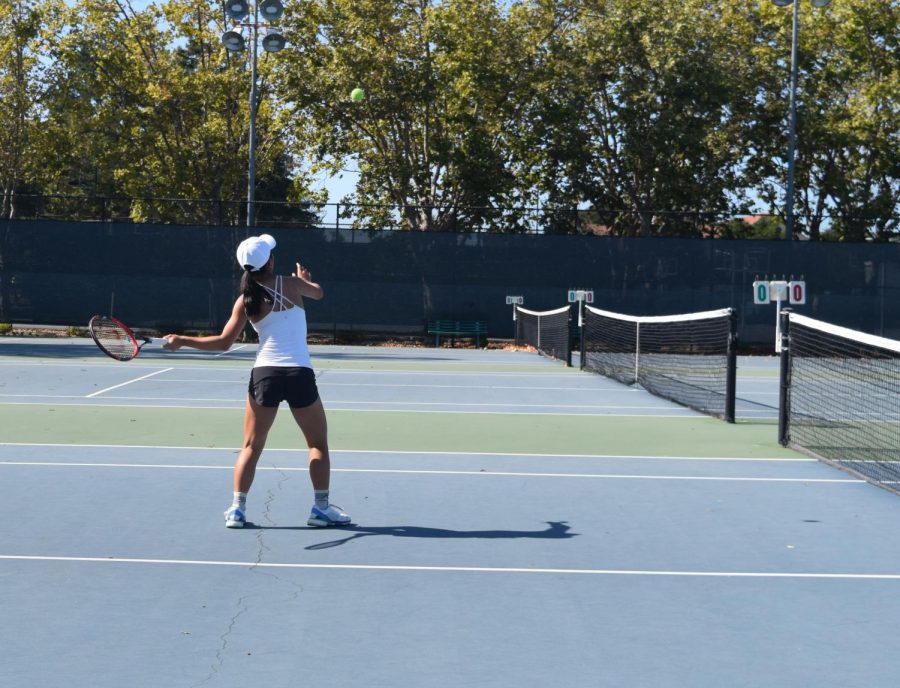 At 5 years old, her father put a racket in her hand. Now, years later, sophomore Kamila Wong stands at No. 1 in the Palo Alto High School girls’ tennis team, holding the title of captain for the second year in a row despite her young age.

Wong’s straightforward and confident attitude stood out to coach Andy Harader even before she joined the team.

“She’s very outgoing, gregarious,” Harader said. “She came up to me two summers ago and said, ‘Look, I’m Kamila, I’m going to be on the team. … I want to be captain.’ Well, Kamila [was] a freshman. There are seniors that want to be captain, but that was the attitude. She kind of grabs it and goes with it. You gotta love that because she can be a real good leader. Most likely, she’s going to be No. 1 as long as she’s here.”

As teammates often play against each other in the spirit of competition, when she joined the team her freshman year, Wong challenged the previous No. 1 on the team, Maddi Page, a close friend with whom she often trains with outside of school.

“The previous two times I ever played her was a few years back,” Wong said. “I played the first time, beat her the first time. The rule is, in order to take someone spot, you need to beat them twice. So I played her again, and I beat her again. They were obviously both tight matches, but in the end, I did win.”

In addition to competing for Paly, Wong has been ranked as high as fourth in NorCal singles and doubles combined, as well as 133rd nationally. During the school year, she participates in local junior tournaments to avoid missing school, says Wong.

“A few weeks ago, in mid-July, I played the New Balance High School Tennis Championships, and I was the first seed in that tournament,” Wong said. “I got to play with Nicole Gibbs, who is a pro who went to Stanford. I came in second at that tournament.”

According to Wong, it was thanks to her father, a big tennis enthusiast, that she picked up the sport.

“I went to elementary school across the street from a [tennis] club,” Wong said. “I went to Escondido, and they have the Stanford Campus Recreation Association. My dad put me in their after-school tennis program … I would go there after school until my dad could come pick me up.”

She began to fall in love with the sport after a few years of playing with the recreation association.

“It actually took off pretty quick for me,” Wong said. “I found the program was really fun. So then I was just like, why not just do this more often?”

Wong left the recreation association after finishing elementary school and tried moving on to club tennis, but found that not only was the commute to tennis academies difficult, but she had also already surpassed the level of club tennis. Now, Wong trains independently. She says that this system works better for her so she can balance her schoolwork with tennis.

“I have a network of people that I know that I hit with,” Wong said. “And then sometimes you see people that you know, or people that you hit with currently, connect you with other people. So I just hit with those people. My dad acts my coach, basically.”

Last year, the Paly girls’ tennis team ranked fifth out of eight teams in the De Anza League. Due to the overwhelming talent in the league, they landed a qualification into Central Coast Section as the eighth-seeded team. Wong said the team’s most impressive match was quarterfinals against the first-seeded team, Monta Vista High.

“We knew we had to play much better because we were playing the No. 1 seed,” Wong said. “Throughout that season, I had beat their No. 1 twice — well, I beat her the first time and she didn’t play the second time. I beat her once and so I knew going in that I already had my game plan. I just had to go out there and do my best.”

With hard work, the team won the match and progressed into semifinals, where they were defeated by Cupertino High School. According to Wong, the entire experience was a breakthrough for the team. This year, she says that she hopes that the team will reach higher and win CCS finals to progress to the NorCal championships.

Despite her prowess, Wong’s life isn’t all about tennis. She said that in her free time, she likes to hang out with friends and go on adventures, as well as build robots. She also reads for fun and writes as a way to express herself.

Harader has high hopes for her as she continues to grow and improve.

“She’s got a lot of clearance on the net, a lot of spin, and she’s a lefty,” Harader said. “She’s not making a lot of errors. You have to force her to make the errors if you want to get the point, so she’s good. … She’s 14, and she’s coming up against seniors that are 18. That’s a big difference in age. So if she continues to go the way she’s going, she’ll get a scholarship to college.”