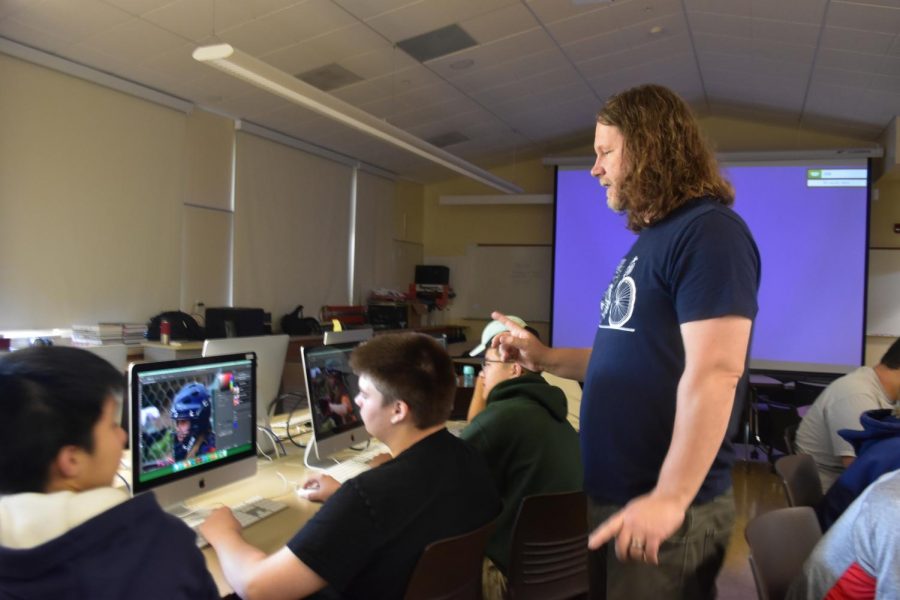 Three journalism teachers are stepping up to teach Graphic Design, Broadcast Journalism and Video production following the departure of two teachers at the end of last semester.

Griffith’s announcement came just days before administrators were set to leave for their July vacations, which made finding a replacement difficult, and the classes were nearly canceled.

“We did post for a new teacher to replace Mr. Griffith, but could not find a replacement with his very specific skill sets,” wrote principal Adam Paulson in an email to The Paly Voice.

To keep the Graphic Design classes alive, journalism advisors Paul Kandell and Brian Wilson offered to each take on a section of Graphic Design. While Kandell advises the online publication The Paly Voice and the print magazine Verde as well as incubator projects, Wilson teaches Beginning Journalism and is in charge of the Viking sports magazine, C-Magazine, and Madrono, Paly’s yearbook.

In an email to The Paly Voice, Wilson said that the two of them offered to take over if the district had trouble finding a replacement, and assistant principals Adam Paulson and Clarisse Haxton decided the week before school, with no other suitable candidates on the horizon, that it was the best option.

“Graphic design is, after all, a crucial component of what we’re already teaching in the publications, so we definitely believe in its importance to a balanced curriculum,” Wilson wrote.

Not only has Wilson taught graphic design courses at Michigan State to undergraduates, but he has also taught high school teachers working towards graduate degrees in journalism, according to Wilson. In total, Wilson has over 24 years of Photoshop and InDesign experience.

Kandell says his knowledge of the programs is not as deep, but points out that he’s been guiding students through award-winning, graphics-heavy publications work for just as long, and that the investment of the two advisers in learning and polishing new skills in these programs and Adobe Illustrator and After Effects will improve their work with students throughout the journalism program.

The two teachers have plenty of preexisting material on which to build their curriculum.

“Mr. Griffith shared materials with us,” Wilson wrote. “We’ve also gotten materials from Ms. Wixsom, Ms. McKenzie, who taught the class prior to Mr. Griffith, and Mr. Gleason, who teaches the class at Gunn. We are taking curriculum components from a variety of sources and also including what we know is best practice for graphic design students.”

Griffith’s other class, Video Production, on the other hand, was eliminated altogether for the 2019-20 school year, with the exception of a handful of veteran students, who were invited to form a documentary team in Kandell’s third period journalism Incubator class.

“My understanding is that they couldn’t find anyone who applied for the job who had the credentials, and also the skill to teach the class,” said Rodney Satterthwaite, advisor of The Campanile, who is taking on broadcast journalism for the upcoming school year. “Instead of putting someone in there who didn’t know what they were doing, perhaps ruining the program, the idea was to delay it for a year, and then try to fill it next year with a little more time and a little more recruiting effort.”

Despite becoming the new advisor of InFocus, and having previous experience advising a broadcast program, Satterthwaite felt that he was unsuited to teach Video Production.

Some Video Production students, especially those who plan to continue their career in film, have expressed dismay at the removal of the class. After three years of Video Production with Griffith, senior Max Rosenblum is one of these people. He has since switched over to InFocus, where he is an executive producer for the show.

Griffith was Rosenblum’s mentor figure for most of his high school career.

“He had his own goals, but he definitely really inspired me with how much passion he had for the whole process,” Rosenblum said. “And he definitely, especially in the Intro to Video course, introduced me to different kinds of movies, and that started my love for movies that continues to this day. I really have him to thank for a lot of that.”

Griffith did not reply to The Paly Voice’s requests for comment.