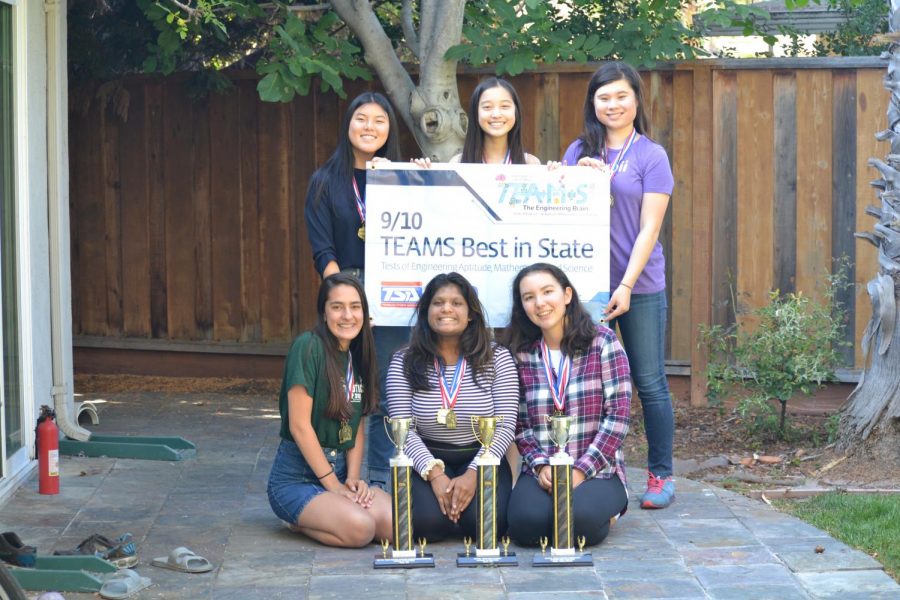 Still glowing from their summer victory, the all-girls Palo Alto High School’s Technology Student Association TEAMS team is looking to mentor other teams after winning first place at Nationals at the beginning of July at National Harbor near Washington DC.

The team, unique due to its all-girl nature, won first overall in the 9-10th-grade division.

Winning Nationals is no easy task — time and effort helped them achieve what they did. Senior Alex Feng, club president, said that in the time leading up to Nationals, they edited and revised their presentations.

“The week before we had to leave, we redid our entire poster, and printed it a day before we left,” said junior Hannah Zhou, club vice president and captain of the all-girls team. “We practiced a lot at competition, which I think helped a lot.”

All their material was created before States in February earlier this year.

“A lot of us grinded during finals week — that was the week it was supposed to be submitted,” Zhou said. “For the presentation, that took place over a long period of time.”

While the club is comprised of five high school level teams, they all practice separately, ultimately competing against each other.

“The main point of the club structure is to serve as a communication hub for sharing ideas and peer-reviewing each other’s work,” Feng said.

In addition to Paly, TEAMS also has a branch at Greene Middle School for younger students. The one team that was sent to compete at Nationals alongside the high schoolers exceeded expectations.

“In an awards ceremony, you get called up for each subcategory if you win top ten. … The middle school team got called up for all five,” Feng said. “They had 50 medals, and then they had five trophies. And they won first overall, which is insane.”

Feng said he hopes that the club will continue to thrive and win at Paly.

Students who are interested in joining can reach out to the club for more information at [email protected].