The Paly Voice • May 24, 2019 • https://palyvoice.com/149591/basketball/sophomore-honored-in-california-girls-all-state-basketball-team/ 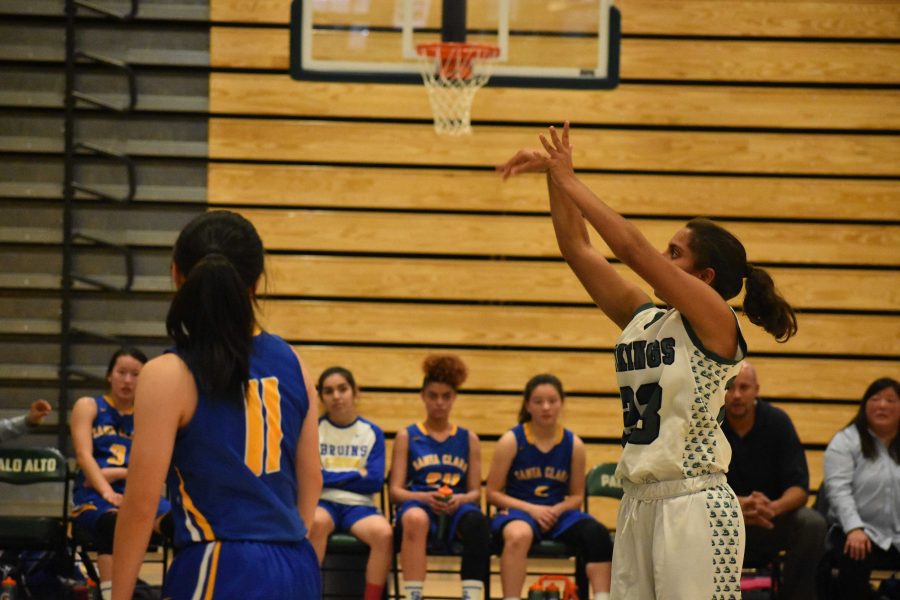 Freshman guard Annika Shah watches as her shot sinks into the net in a game against Santa Clara High School. Palo Alto High School went on to win the game, 51-40. "Many people underestimate the freshmen and I am here to just prove them wrong," Shah said.

Refusing to allow her young age and small stature to define her, a Palo Alto High School sophomore varsity girls’ basketball player has joined the ranks of the California girls’ all-state basketball team, which recognizes the top basketball players in the state.

“I am very blessed to be put onto the California all-state team,” Shah stated in an email. “There are little accomplishments that help me reach my goals, and this is one of them, though I still think that I need to improve way more, and that I’m nowhere [near] the potential I have in this game.”

Ever since Shah joined the team in freshman year, she has established herself as a key player, acting as point guard and shooting guard, with a stunning record of 16.2 points per game.

“This year with the girls [my teammates] was amazing — it was one of the greatest experiences I’ve ever had with the many teams I have played for,” Shah said. “What made our team do good was how connected we were to each other, which is what led us to more wins. I am so proud of the team and what we were able to accomplish.”

Shah’s love for basketball started at a young age. Now, she trains several times a week and pours hours of her time into her passion for the sport; on top of six practices with the school team per week, she also trains with a private coach and plays for the Peninsula Elite club.

“No matter what, I never go a day without touching a basketball,” Shah said. “I train with my trainer twice a week. I have club basketball practice twice a week. But even with these practices, I still go out into my backyard and get shots up by myself.”

Becoming so skilled at basketball has required many sacrifices; Shah has been forced to give up normal high school life.

“For me it has always been school, basketball, then social life,” Shah said. “Having a set line of commitments helps me set a plan, and know what comes first.”

To rise where she has today, Shah had to overcome a natural barrier.

“In this game there are two things that go against me, my height and my race. I am Indian, so I am not athletic or tall, and not built for this sport,” Shah said. “I want people to know that I’m playing for all those shorter kids who didn’t have a chance, and I want to prove that nothing is impossible if you set your mind to it.”

She hopes to inspire other aspiring basketball players with a similar ethnic background to continue to persevere.

“I’m doing this for all the girls who don’t even get a chance to try something they might love. I have been lucky to be brought into a life where we don’t have to worry as much about money, and where our next meal is coming, and if our brothers or sisters are going to come home,” Shah said. “I play this game for the people that put their hearts into my dreams. I play for my parents, my brother, my teammates, my coaches, my trainer — all the ones who believe in me — but I also play for the ones who don’t get the opportunity, and that’s what pushed me to work harder.”