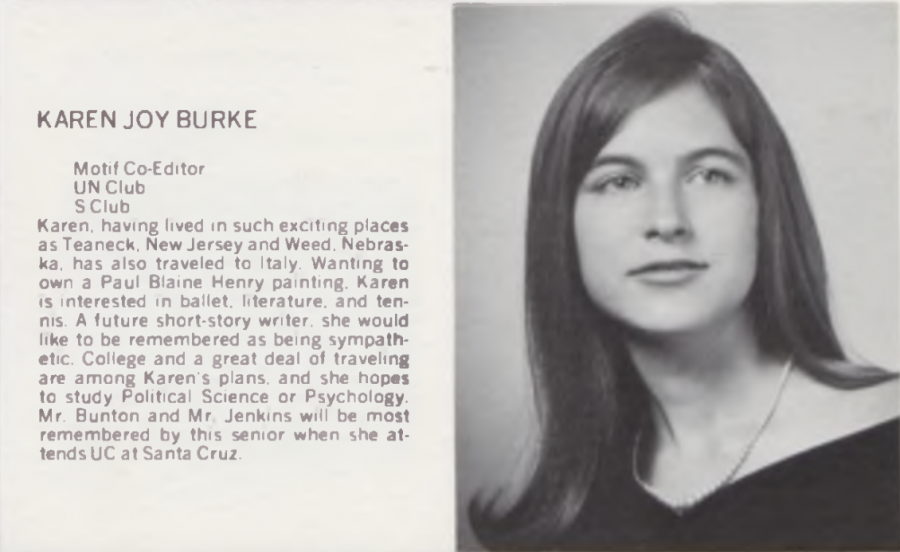 Today, Karen Joy Fowler is celebrated as a gifted novelist; a pioneer of literary fiction and fantasy whose notable works include “The Jane Austen Book Club” (2004) and “We Are All Completely Beside Ourselves” (2013). But according to the Madrono Yearbook, in 1968, she was Karen Joy Burke, a “future short story writer” at Palo Alto High School.

Fowler’s interest in writing was evident during her time at Paly — in her senior year, she was the co-editor of the Motif, Paly’s literary magazine. She was also the president of the Model United Nations club, attending annual M.U.N. conferences at the University of California at Berkeley.

After graduating from Paly, Fowler majored in political science at Berkeley. After earning a master’s degree in South Asian Studies, meeting her husband and having her first child, she moved to Davis, California.

According to her website, Fowler kicked off her writing career in Davis with early science-fiction short stories, including “Recalling Cinderella” (1985) and “Artificial Things” (1986). She published her critically acclaimed debut novel “Sarah Canary” in 1991. In the same year, she worked with science fiction author Pat Murphy to found the James Tiptree, Jr. Award for science fiction literature that explores the concept of gender.

In 2004, Fowler published “The Jane Austen Book Club,” which was a New York Times bestseller for 13 weeks and was adapted to a film in 2007. Her most recent novel, “We Are All Completely Beside Ourselves,” won the PEN/Faulkner Award in 2014.

Fowler, now a mother of two and grandmother of seven, lives with her husband in Santa Cruz. Although she has not revealed if and when she will publish her next novel, she runs a blog discussing everything from “Game of Thrones” to the Supreme Court.