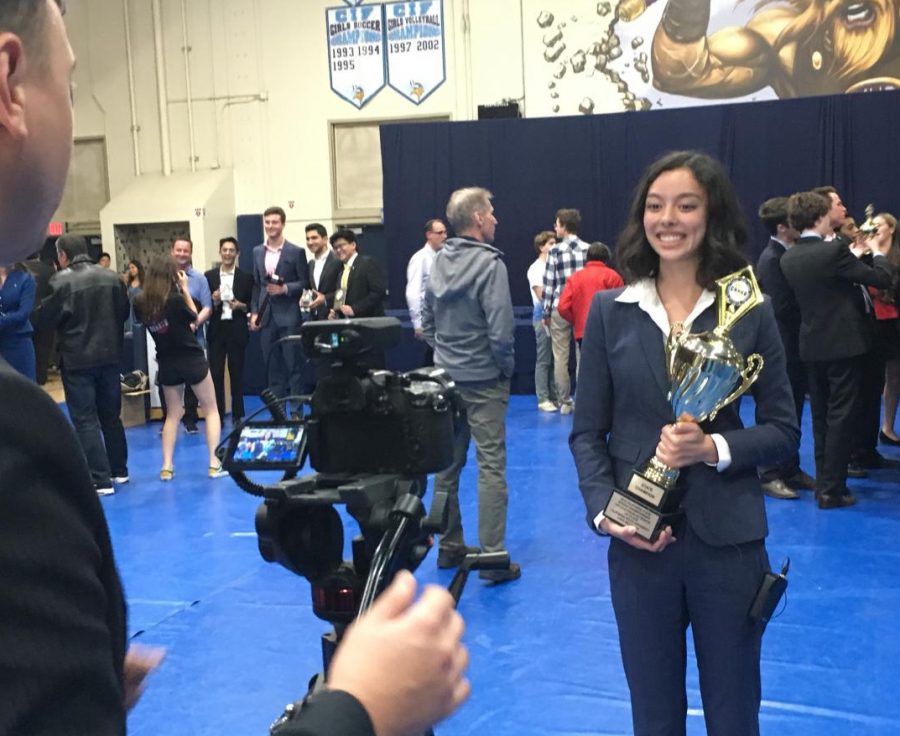 Senior Ashley Hitchings poses with her trophy after winning first place at California’s Speech and Debate State Championships for Lincoln-Douglas debate Sunday, May 5. Paly’s congressional debate team and speech team also placed in the top 10. “For me, competing at states was especially sentimental because it was the final tournament of my four-year debate career,” Hitchings said. “Catching up with longtime friends I’d met at tournaments freshman year, cherishing the opportunity to debate at the highest level of argumentation, and enjoying the chance to support and be supported by my other teammates at states was all tremendously gratifying.”

The Paly Speech and Debate team will attend nationals in June following a win in the Lincoln-Douglas category and a top-10 finish in both other categories at the California State Championship tournament last weekend.

Senior Ashley Hitchings took first in Lincoln-Douglas debate, earning Palo Alto High School its first state championship in over a decade and second in Paly history, according to Hitchings.

“Winning states feels both exhilarating and surreal,” Hitchings stated in a message. “When I joined debate freshman year, I was hands-down petrified by public speaking, so to be where I am now feels very empowering and like I’ve finally overcome that fear.”

Hitchings says her accomplishments at the state tournament are the result of over 20 hours of preparation, including practice debates and last-minute tweaks based on feedback from judges.

Hitchings was not the only Paly debater who exceeded expectations at the state tournament. According to coach Jennie Savage, the congressional debate team and speech team have had an impressive season as well, and both placed in the top 10 at the State Championships.

“We’ve won probably more than half of the tournaments that we’ve been to, which is incredibly unusual for a team to do,” Savage said. “All of the squads have been doing phenomenally well.”

Senior Nisha McNealis will participate in the Lincoln-Douglas debate at Nationals in June, and Junior Maya Levine will compete in congressional debate at the National Championships in Dallas, according to Savage.

“Our team is really strong, and we consistently place well at tournaments,” Tu stated in a message.

Unlike Hitchings, Tu still has one year left on Paly Speech and Debate, and wants to make the most of it.

“Personally, my goal for next year is to qualify for states again!” Tu said.

Hitchings wants to emphasize the importance of the role that her coaches and teammates played in getting her to where she is today.

“I also know that I wouldn’t be the debater or person I am now without my superb coaches and stellar teammates,” Hitchings stated. “It really does take a village to raise both a child and an orator, and the sheer amount of support and mentoring and camaraderie they’ve provided is one of the reasons I made it so far.”