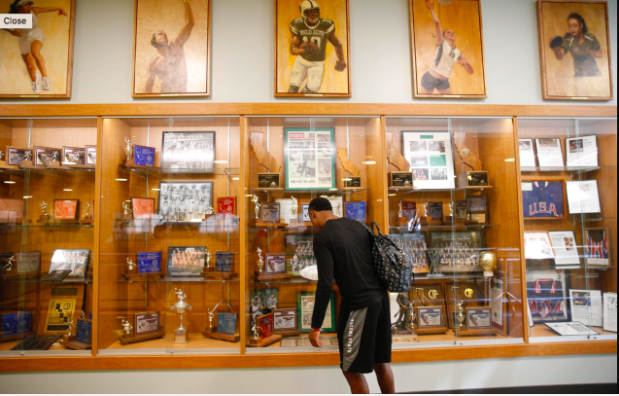 Paly alumnus KeeSean Johnson ('14) visits the Peery Family Center at Palo Alto High School where a portrait of Davante Adams, a mentor of Johnson's, as well as a Paly alumnus who now plays for the Green Bay Packers, is displayed. Johnson was picked by the Arizona Cardinals in the sixth round of the 2019 NFL draft. Former coach Jason Fung described Johnson as a “hard-working kid, always had dreams and aspirations to play football.” Photo provided by: Fresno State fundraising department

The tally of Palo Alto High School athletes on professional sports teams is soon to increase by one.

On Saturday, April 27, the Arizona Cardinals selected Keesean Johnson, Paly Class of 2014, in the sixth round of the NFL draft. Johnson, who at Paly competed in four years of football as well as a year of track and field, was a standout high school athlete, according to Paly physical education teacher and former football coach Jason Fung.

Fung said Johnson’s intention to play football at a high level became clear when he picked up his pads freshman year.

A two-star high school recruit at the receiver position, Johnson committed to play football at California State University, Fresno, where he broke the school’s single-season receptions record previously set by another Paly alumnus, Davante Adams, who now plays for the Green Bay Packers.

“They were both very good athletes, but two different kinds of athletes,” Fung said of Johnson and Adams. “At the end of the day, it’s what team wants you for what skill.”

Paly has a handful of students who have gone on to play their sport at the professional level. In addition to Johnson and Adams, basketball player Jeremy Lin was part of Paly’s Class of 2006.

“We compete at a very high level as a public school,” Fung said. “With private schools, we always say they’re at an advantage — for us to compete with them is saying a lot for our school.”