The Paly Voice • May 7, 2019 • https://palyvoice.com/148850/sports/student-athletes-take-next-steps-towards-collegiate-career/ 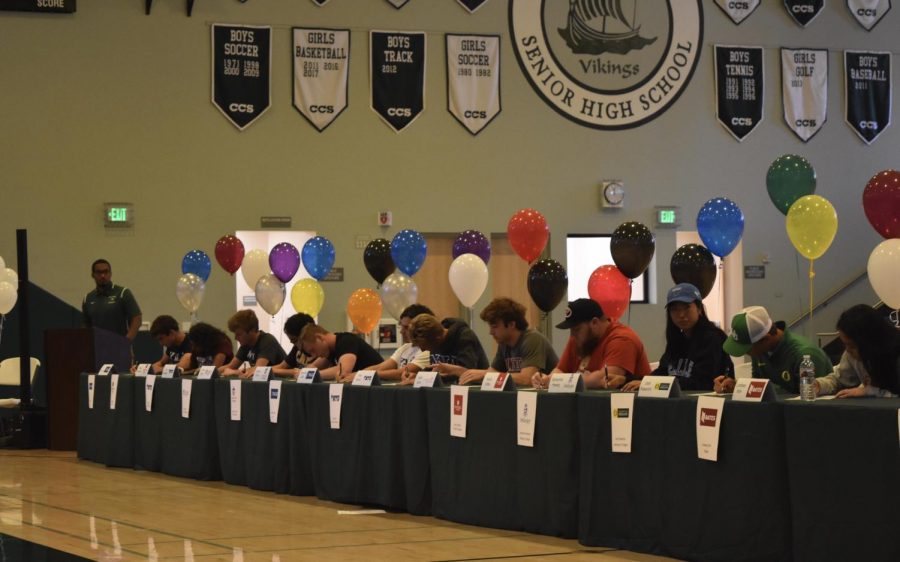 Student-athletes are preparing for the next chapter of their sporting and academic lives following a Signing Day ceremony last week in the Peery Family Center.

Paly Athletic Director Therren Wilburn opened with a speech, encouraging the 18 soon-to-be college athletes to continue to work diligently as they transition from high school to college.

“Sport participation at Paly has likely seemed like a marathon to you guys, and I think it has all come full circle,” Wilburn said. “But don’t take your foot off the [gas] yet. The marathon really continues.”

Kevin Anderson, a former football player at Paly and Stanford, addressed the students and gathered crowd, sharing his own experiences as a student-athlete in college. Anderson emphasized the idea that collegiate sports programs prove rigorous not only athletically, but academically and socially, as well.

“The first thing that I think is important to realize is that you are going to have a huge transition in the next couple months,” Anderson said. “In order for you to be a successful student-athlete, you have to have the mindset that you are going to wake up every day and dominate in all facets of life, not just one.”

As the seniors penned their signatures on their letters of intent, many were fulfilling childhood hopes. For senior Siena Brewster, who plans to attend Missouri State for beach volleyball, playing Division 1 volleyball in college has always been her dream — one that she has finally attained, even if it may not look as she originally planned.

“Originally, it [the plan] was for indoor [volleyball], but plans changed and now I am doing beach, which I am so excited for,” Brewster said. “I say everything happens for a reason.”

Senior Jack Callaghan expressed his excitement as he looks forward to attending New York University as a part of its diving program.

“I am really excited to have a new coach and new teammates, and the whole atmosphere of college diving is really exciting to me,” Callaghan said.

As the 2018-2019 school year comes to a close, this generation of Paly student-athletes looks ahead.

“[We are] done with high school, we are moving on. … I’m just excited for the future,” Brewster said.