The Paly Voice • May 1, 2019 • https://palyvoice.com/148719/news/beyond-the-stars-choir-concert-features-visual-and-auditory-storytelling/

“Beyond the Stars” choir concert features visual and auditory storytelling 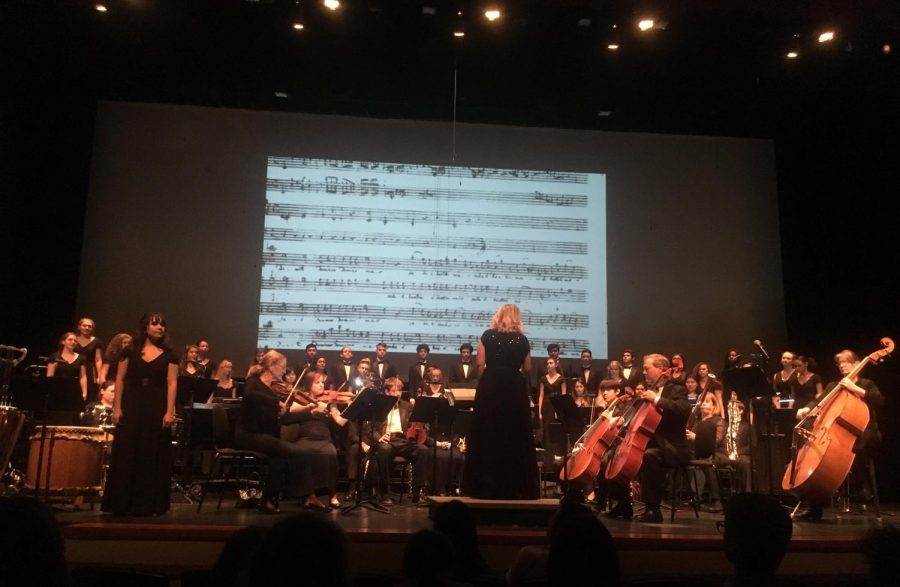 Singers of the Palo Alto High School choral program prepare for an acapella competition after their annual spring concert, “Beyond the Stars,” held in the Performing Arts Center on Sunday.

The concert featured two different styles of music: classical and film. Many of the songs were accompanied by visuals which represented the text from the song.

The show kicked off with Spectrum, an all girls choir, singing “Five Hebrew Love Songs,” composed by Eric Whitacre with text from Hila Plitmann. Translations of the lyrics as well as images of galaxies and space were projected behind the singers.

This concert was the first time the choir program featured images and videos behind the singers, according to senior Jessica Weiss, a member of the Madrigal Choir.

“I think people really loved it,” Weiss said. “I think it gave [the songs] a little bit more context. Especially for the Lux Aeterna just because it’s in Latin and it’s very long.”

The concert also included an orchestra of over 20 professional and student musicians, which accompanied the choir in the film music portion of the concert.

Weiss said she is grateful to have the ability to perform with an orchestra.

“We’re super lucky that we got the donations and were able to have a professional orchestra,” Weiss said.

Senior madrigal Alex Daw said he believed that the orchestra enhanced the audience’s enjoyment of the pieces.

“Performing with the orchestra was beautiful,” Daw said. “You really get to hear all of the surrounding music. With the orchestra, every piece comes together and you can really hear it. It’s really strong and it adds a whole different dimension to the piece.”

The concert also featured John Williams’ “Duel to the Fates,” from “Star Wars I: The Phantom Menace.” Scenes from the movie were projected on the screen and contributed to the auditory storytelling.

Another piece which also offered visuals was “Baba Yetu,” composed by Paly Alumnus Christopher Tin for the video game “Civilization.” Visuals from the game played in the background while senior Madrigal David Hernandez stunned the audience with his solo.

“I was so nervous [for my solo],” Hernandez said. “I’ve been practicing [the piece] since they first introduced it last year.”

According to choir teacher Brittney Kerby, the scores for the pieces were borrowed from Stanford’s choral program.

“The music they’re singing is actually college level repertoire — it’s not high school level at all,” Kerby said. “As an instructor, I’m just so incredibly proud of the progress that they made this entire year.”

The “Beyond the Stars” concert is the choir’s last big concert of the year, but the Paly Choirs will be performing at many other smaller concerts this year.

According to Weiss, the Vikings will hold a small ensembles concert for acapella groups on May 11.

“They’re [the acapella groups] actually going to be competing [against each other] at that concert,” Weiss said. “You should come and vote [for best acapella group].”

Seniors will also be acknowledged at that concert.