From Bay Area to Barcelona: Art students take on Europe 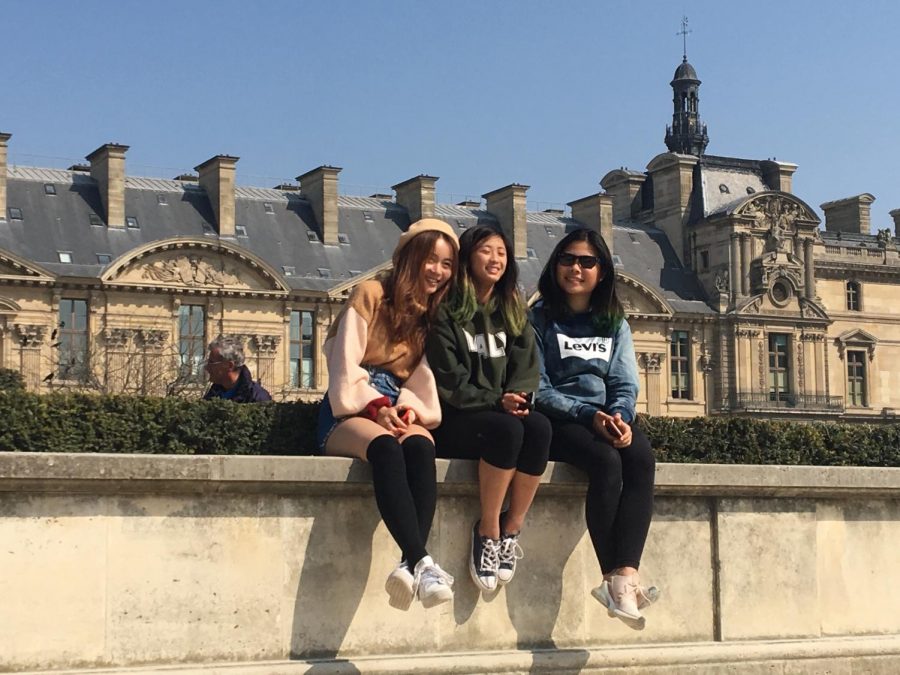 Senior Jessica Lee, sophomore Samantha Ho, and freshman Xiaohan Li pose outside of the Louvre in Paris. The students participated in an art trip through France and Spain during Spring Break with several other art students from Palo Alto High School. “My highlight might be going to the Louvre because I’ve never gone before so seeing so many large scale paintings and things you’ve only seen in pictures, so that was an interesting experience,” Li said.

A group of art students from Palo Alto High School is richer in experience after participating in a European adventure over spring break as part of an annual trip offered at Paly through the American Council for International studies.

The tour focused on European art and architecture, and students visited various museums in both Spain and France.

The Paly art department staff encouraged students to sign up for the trip, and art teacher Kate Mackenzie chaperoned the group.

Although this is the first year that Mackenzie has accompanied the students on the trip, she had heard about the trip from Deanna Messinger, an art teacher at Gunn High School who served as a chaperone for seven years.

In past years, when Messinger chaperoned the trip, students had the opportunity to travel to Italy. However, this year due to a low number of participants, the group was notified in December that it would join other schools as they toured Paris, Barcelona and Madrid instead. The overall group consisted of students and teachers from Los Angeles, San Rafael and Washington.

From Paly, seven art students across all grades participated in the trip, and the opportunity to sign up was available to students in all different art classes.

“I learned a lot about art history and different styles of works, and also how to appreciate modern art,” Ho said.

Xiaohan Li, a freshman who is also enrolled in Painting and Drawing and went on the trip alongside Ho, recognizes the importance of international travel.

According to Mackenzie, although the majority of the students on the trip did not know one another prior to their departure, they bonded during their time spent traveling together.

“One of the most fun parts, though, was not only watching them watch the art because that was really fun, but it was also watching them come together as a group,” Mackenzie said. “It was great … because it’s not easy to travel, it’s hard work, and we were constantly getting lost.”

Jessica Lee, a senior who is currently enrolled in AP Studio Art with Mackenzie, not only enjoyed meeting other Paly students, but also appreciated branching out and engaging with the participants from other schools.

“It was just an amazing trip,” Lee said. “Especially meeting new people, because you don’t really get to meet people outside of California.”

Looking to the future, Lee plans on returning someday to further explore European culture, and also to further enhance her understanding of art.

“My biggest takeaway is that I really want to go back,” Lee said. “I want to do it again.”