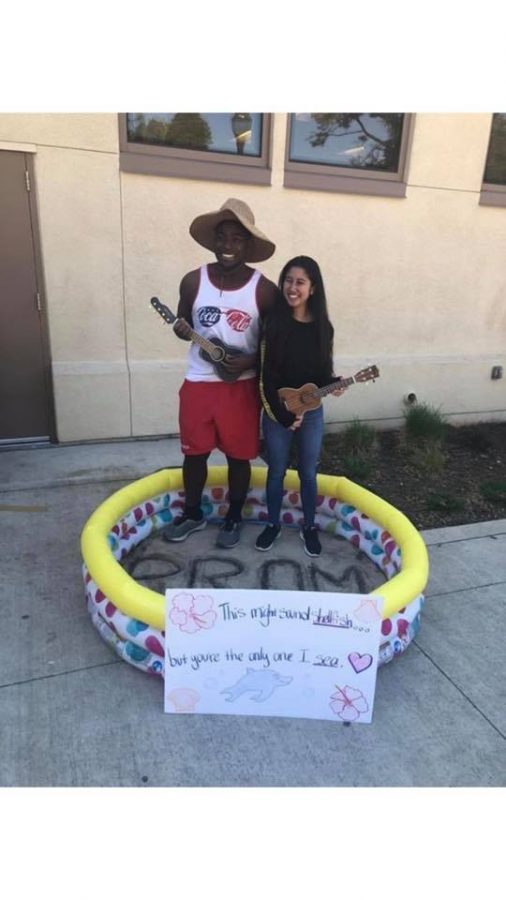 Student Activities Director Matthew Hall started the competition in order to get students excited for prom, according to Annie Tsui, the senior vice president.

“We don’t want to pressure anybody to ask someone else if they don’t want to, but for those who do, it’s a cute way to do it and it kind of just lifts the vibe of campus,” Tsui said. “No matter if you’re going to prom with a date or even at all.”

According to the ASB Prom Asking Competition notes, there will be three duos who win. All three duos will be reimbursed for their prom tickets by ASB and they will be the first people to enter the venue, according to the competition notes. Second place will receive $5o of free food collectively and the first place winners will receive a reimbursed car wash as well as $100 of free food collectively.

Senior Alex Daw said he entered the competition because of the number of people who liked his “promposal” idea. He asked junior Kimberly Clark with a crowd of people singing and playing “Count on Me” by Bruno Mars on the ukulele along with a kiddie pool and poster. According to Daw, free prom tickets were another big factor in entering the competition.

“It’s a tough cost to throw on top of a tux,” Daw said. “They [the free tickets] would be ridiculously helpful.”

Indeed, the tickets are pricey – at $115 each — but Tsui said the expense is necessary because of the venue, transportation, “unlimited” food and entertainment.

“Huge amounts of money goes to reserving the location,” Tsui said. “This doesn’t include the huge amount of food available, decor, the cost for music and a live DJ, as well as the transportation of almost 1000 individuals using district buses to San Francisco — which is super expensive.”

Additionally, Tsui said she believes the money spent on prom attire is controllable.

“It comes down to what dress you buy and if you do your own hair or makeup,” Tsui said. “If you’re wearing a suit or tux, it also might be a worthwhile investment to buy now and save for many other occasions.”

According to Tsui, ASB recognizes the “high cost” of prom and offers prom scholarships.

“If you cannot afford a prom ticket for an undisclosed reason, you can totally talk to us and we’re willing to help you pay either partially or in full,” Tsui said. “We’re really about including everybody and would love for as many people to go as possible, so if finances is what’s holding you back, let Paly ASB help you out.”

According to the Paly ASB website, prom tickets can be purchased from the Paly Webstore until 3:30 p.m. today and scholarships can be obtained from guidance counselors.