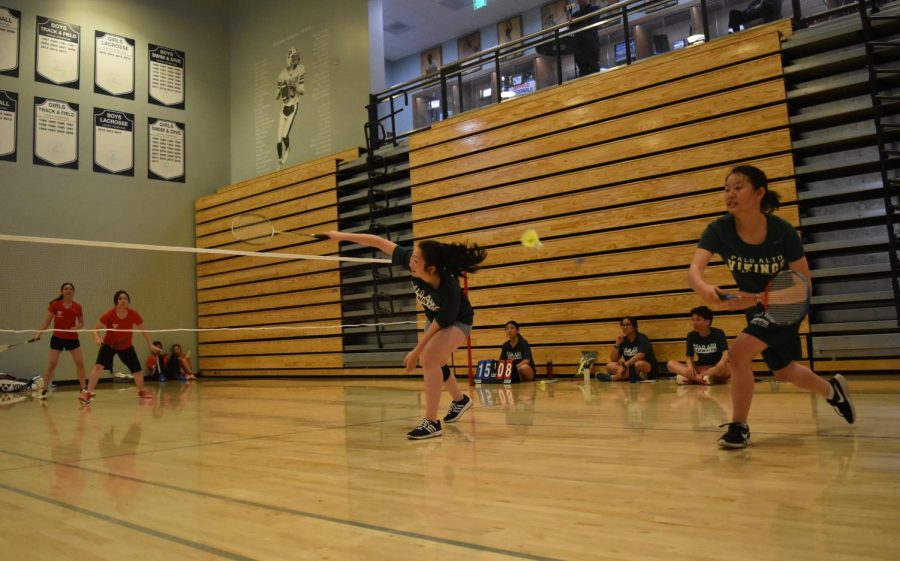 The Palo Alto High School badminton team (1-3) lost to Saratoga High School (2-2) on Tuesday in the Peery Family Center with an overall score of 10-20.

The Viking loss marks the team’s third of the season, and came after a triumphant win against Gunn on March 12.

Paly coach Jesi Marquez said the team was “really excited” to have beaten the cross-town rival.

“It was a hard-fought match,” Marquez said. “Everyone worked really hard and we’re really proud of everyone on the team.”

As new coaches of Paly badminton this season, Marquez said that she and her co-coach Alex Adame, both from Southern California, are still figuring out the team’s strengths and weaknesses.

“It’s been a very steep learning process for Coach Alex [Adame] and myself,” Marquez said. “We joined one week before the first week of the season, so it’s been an interesting ride for us to get to know all the players and assess everyone’s skill level. … We are kind of learning as we go, and kind of riding along this wave with the team and the season.”

For both teams, Tuesday marked their first meeting in recent history, since Saratoga moved up from the El Camino Division to the De Anza Division this season.

“We haven’t really played Saratoga before, so we’re kind of still feeling them out,” varsity senior Zakir Ahmad said.  “We didn’t get to play them last year. We just won our last game, but I’m not really sure about this game.”

A highly anticipated match during the meet, Ahmad and junior Jonathan Mi’s varsity 1 doubles match, garnered a large crowd of spectators, as they took on junior Jeffrey Xu and freshman Adrian Mar from Saratoga. Despite winning the first set 21-17, Ahmad and Mi lost in the final two sets 14-21 and 19-21.

Winning 11 matches total, Saratoga earned enough points to walk away with the win. Although it is still early in the season, Saratoga’s victory over Paly is a step toward securing its place in the De Anza League for next season, which is the Viking’s main goal, according to varsity sophomore Wilson Fung.

“We moved up a league this year, so we’re just trying to at least try our best to … beat one or two schools, so we stay up in the league,” Fung said.

Paly will play Lynbrook at 3:45 p.m. today at Lynbrook.