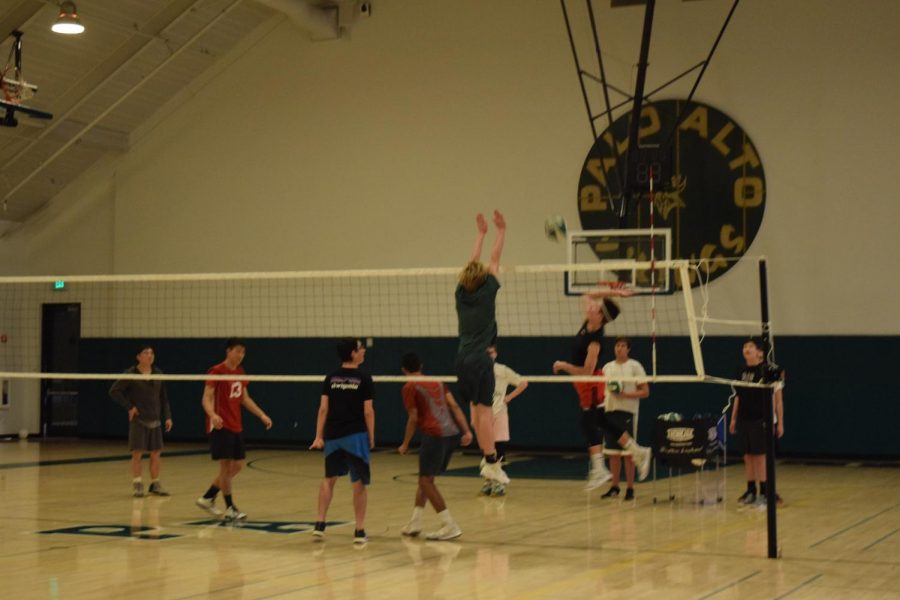 Despite this being only the Palo Alto High School boys’ volleyball team’s second year, the team as a whole has trained hard, and coaches and students alike are optimistic about their performance this season.

All team members have been practicing in anticipation for the season, according to head coach Ed Yeh.

“Our skill level is really high, we have a year behind us, and the players’ skills are going up,” Yeh said. “I don’t see a reason why we can’t do well.”

After losing two key starting players who graduated last year, the team recruited several strong athletes this season to fill the gaps. Among them is freshman Owen Rice.

“As a freshman, going on varsity is a big deal, but one of the main things is, you’re going to be playing against kids three or four years older than you,” Rice said. “It’s kinda scary, looking into it, but it should be fun.”

The team placed third out of eight teams in the El Camino league last year, ranking under Wilcox and Gunn High School. However, this season, Wilcox lost seven key players and has a new head coach, and Gunn lost a star scholarship player, who graduated.

“Gunn is always a grudge match, and they beat us twice last year. If we smoke them and make them feel bad about themselves, that would make my year,” Yeh said.

According to Yeh, there are currently four members on the team who play in clubs outside of school, including Rice.

Back when Yeh was still a student in the Palo Alto Unified School District, boys’ volleyball was not a high-profile sport, but he said he has reason to hope for change.

“I think with the pipeline coming in through the middle schools, and with volleyball picking up around here, I think it will become more of a voice for them,” Yeh said.

The athletes have high hopes for the team, vocalizing their desire to place well in the rankings.

“My hopes are that we win first place in league and we make it far in the postseason,” team captain Raymon Chen said.

The Paly team will face off against Gunn at 6:45 p.m. tonight at Paly in the Peery Family Center.