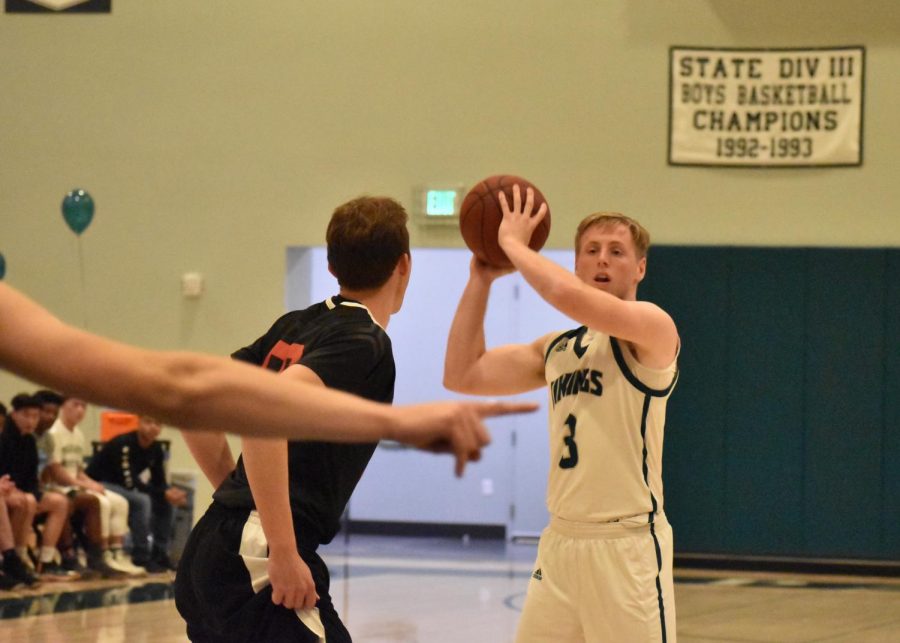 Paly senior Jackson Chryst surveys the court for an open teammate. The Vikings’ Tuesday victory against Gunn capped off their 9-3 league record, and they will head into the playoff season with a five-game win streak. “We have to wait and see where we are seeded, but our expectation is to play hard and leave everything out on the court,” Chryst said.

If you ask Rodney Tention, the Palo Alto High School varsity boys’ basketball team (9-3, 21-10) has come a long way since the start of the season.

“You basically had a whole new team with a lack of varsity experience, and from the start of the season, if you saw us earlier, you’d be thinking, ‘Boy, there’s no chance,’” said Tention, the head coach of the team. “By the end of the season, we were a team to be reckoned with.”

This feeling was echoed at the team level as well.

“We needed a little chip on our shoulders to make us play at a greater level,” senior Jackson Chryst said.

Tention, who replaced Peter Diepenbrock as the boys’ head coach in May 2018, said that the transition from Diepenbrock’s coaching style to his own was relatively uneventful.

“It was a little bit of a transition,” Tention said. “‘Who’s this guy? What’s his coaching style like? We’ve got to get to know who he is. And once they saw how I … kept my head level and communicated with them, and explained to them why we’re doing things, I think they really caught on and grasped that and ran with that.”

Tention incorporated Diepenbrock’s defensive style of play into his own coaching philosophy.

“The constant emphasis on defense was probably something that I kept that Peter [Diepenbrock] emphasized well,” Tention said. “Our philosophy on where the ball needed to be driven was a little bit different, but I think the biggest thing was that we were going to be a really good defensive team. And that’s what he prided himself on as well.”

The team began its season with a victory over Sequoia High School, 53-42. From there, it had an on-off record, regularly alternating between losses and wins.

According to Tention, the most challenging moment of the season was the team’s first game against Los Altos High School on Jan. 18, which remained tight until the fourth quarter when the Vikings pulled away, winning 52-38. A fire alarm disrupted the game midway through.

“After having what I thought was a good week of preparation, we lost our mental focus, and thank god for the fire alarm,” Tention said. “Then after the fire alarm, they put it together and we found a way to win, but in that post-game talk to them, I let them know how disappointed I was in their effort and their focus, and I thought they were very immature.”

However, instead of punishing the team, Tention rewarded them for their hard work during practice the next day.

“As mad as I was earlier in the day, I decided, ‘We’re going to do something fun at the end of this day, I just have to,’” Tention said. “And I bought them Chick-fil-A. At the end of the practice, we did a five-minute shooting drill, and my wife walks in with the bags of Chick-fil-A, and one of the kids said, ‘No way!’”

The team ended its regular season with a league record of 9-3. After defeating Independence High School 58-54 on Feb. 19 and Carlmont High School 62-47 on Feb. 21, they faced off against Piedmont Hills on Feb. 23 for the Central Coast Section Division 1 Title.

Despite being neck and neck for the first two quarters, and with the score at 18-17 at halftime, the Vikings overpowered the Scots during the second half and ended the game victorious, 42-33.

Chryst said that he was happy that the Vikings won the title despite the team not setting it as a specific goal.

“Last year, I didn’t get the experience of winning it, but this year we went in with the expectation of just trying our best and seeing what happened, because our starting five hadn’t really played that many varsity minutes,” Chryst said.

After winning the Division 1 Title, the team advanced to the Northern California regional playoffs, driving four hours to Sonora to defeat Sonora High School on Feb. 26 in a close-fought match, 68-62.

With this victory, the team moved into the regional semifinals round to face off against Monterey High School on March 2. However, their luck ran out, despite being ahead by 12 points at the end of the first quarter, according to MaxPreps.com.

“We turned it over down the stretch a little bit, something that we hadn’t been doing, but to give Monterey credit, they made plays when they had to make plays,” Tention said. “That three-point shot they made … it wasn’t like he [the Monterey player who scored] was wide open. Matthew [Marzano] did a great job contesting, but the kid made a great shot … we did turn it over here and there, but that wasn’t the deciding factor. It was going to be a close game no matter what.”

The loss ended the team’s 11-game winning streak since losing to Homestead High School, 56-60, on Jan. 25, bringing the Vikings’ overall record to a disappointing 21 wins and 10 losses. However, Chryst said that he looks back on the season with pride.

“I think a lot of people thought that our program was a bit of an underdog, but we went to the playoffs, and unfortunately we were a play away from making the NorCal finals. But looking back on it, I’m really happy about the memories and the great times I had, the great teammates I played with,” Chryst said.

The Vikings will be losing top talent in the form of seniors Marvin Zou, Jackson Chryst and Wes Walters come next season. Tention said that he is confident that underclassmen will step in to fill their shoes.

“I feel good with the ‘nucleus’ back — in particular, Matthew, Connor, Anthony Yu,” Tention said. “Those three really played significant minutes for us this past year. They have to step their games up to help replace Marvin and Wes and Jackson. And there’ll be some JV guys that will help, and then the other returning guys, Nick Burtwell, Will DeAndre, Louis Passarello, Jamir, Junacio, those guys are going to have to step it up as well.”

However, Tention said that the leadership qualities that some of the graduating seniors possessed will be hard to replace.

“Wes and Jackson, they’re football players,” Tention said. “They never scored a gang of points, but their leadership and their toughness went a long way for us, and that’s what’s going to be hard to replace. Somebody’s going to have to step in and be that guy that dives for the loose balls and doesn’t care about anything but winning.”

Chryst said that he is confident in the team’s abilities despite losing several seniors.