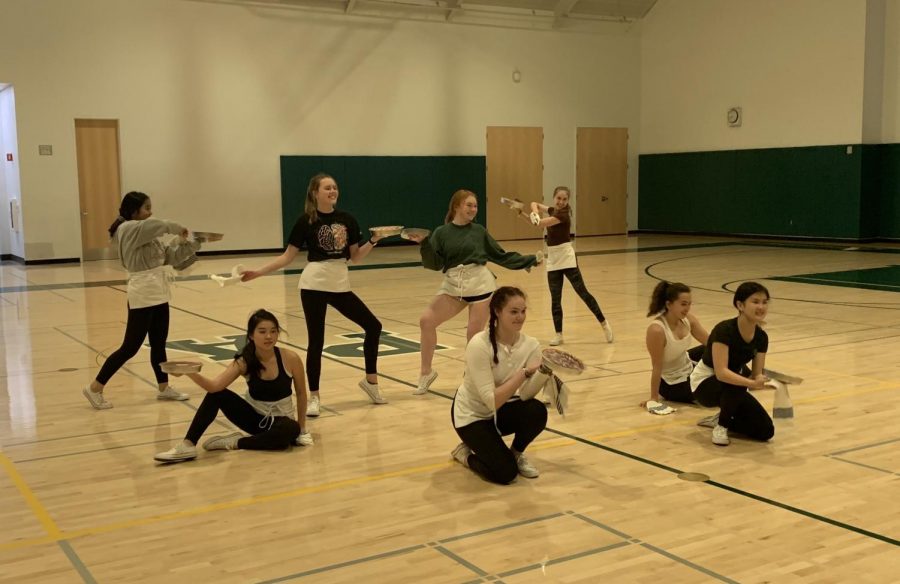 The Palo Alto High School dance team strikes a pose from a character dance routine in the small gym to prepare for the upcoming national competition. According to captain Iris Hart, this waitress-themed dance, based off the Broadway production “Waitress,” has been scoring better and better at each competition. “We’re doing it [the routine] in the gym so we can get our spacing right,” captain Abby Cummings said. Photo: Dylan Zou

“Five, six, seven, eight.” Freshman Rowan Erickson counts off for the Palo Alto High School dance team as it runs through a routine for the upcoming national competition in Anaheim, California.

The team is looking to continue its trend of improvement from its last three local competitions and dazzle the judges at the national competition for the fourth year in a row since its first competition in 2016.

According to dance coach Alanna Williamson, the team won first place in all categories in 2016 and wants to do well this year too.

“We haven’t been able to do it [win first place in all categories] since then, though we have scored pretty high,” Williamson said.

According to captain Abby Cummings, each team is scored out of 100 points split over multiple categories.

“There’s a bunch of different categories ranging from small jazz to medium jazz to large jazz, but also different styles of dance like character and prop,” captain Iris Hart said. “There’s usually between 12 and 20 dances per category.”

According to Cummings, the team has been performing extremely well in the small dance division, in which it won third place at the last local competition and at last year’s national competition.

“All of our dances this year are looking pretty good and they’ve been scoring a lot better at each competition, but I’d say small dance right now is the one that has more potential [to win],” Hart said.

According to Williamson, there is a lot more outside help for this year’s training compared to the last.

“We had a choreographer come in last week to help us work on our showmanship,” Williamson said. “We also have a technique coach coming in to help us with our times.”

A judge from USA Dance, which supplies judges for nationals, will be at practice this Saturday, according to Williamson.

“The judge that’s coming on Saturday has seen us at two competitions already this year and she was one of the more harsh judges on us,” Williamson said. “She’ll be mean to us but then we’ll get really good.”

The national competition will take place in Anaheim on March 16.