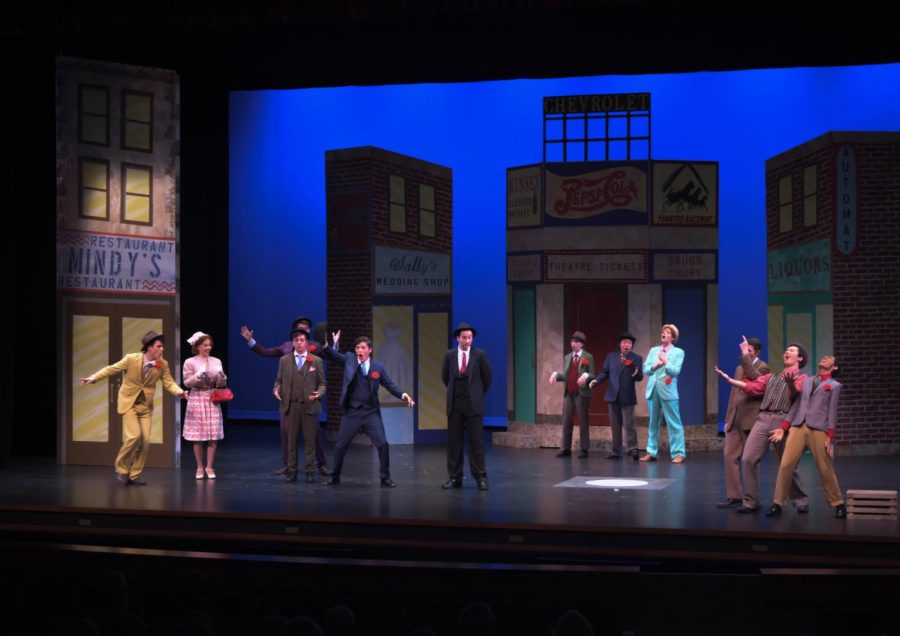 Paly Theatre will be working together with the Palo Alto High School orchestra in performing the “Guys and Dolls” musical, March 9 through March 17, in the Performing Arts Center.

Set in New York City, the plot follows the life of several big-time gamblers and the dilemma they all face: to choose their passion for gambling or their significant other as a priority.

According to junior cast member Leo Marburg, the performance will be based on the original 50s Golden-age Broadway production and will feature a lively soundtrack with jazz show tunes.

“Since we are setting it in the time period in which it was written, there are going to be a lot of similarities between our show and the original Broadway production,” Marburg said. “For example, the positions played and the music that we sing in the script aren’t abridged, so we will be performing the actual music.”

Senior Sebastian Khairkhahan said he is looking forward to watching the performance because it will feature a classical appearance with costumes from the 50s era.

“Nowadays, the standard is to add of a little bit of new twist to classical productions,” Khairkhahan said. “That’s why you see Jesus Christ Superstar with John Legend, which was completely different. Even the costumes were very modern but ‘Guys and Dolls’ stays very true to the original production.”

Additionally, Khairkahan said he believes the heavy preparation from Paly Theatre that has been put into the production will definitely show in Paly Theatre’s performance.

“It’s the first time in a while that Paly has had a musical performance, and it will be interesting to see how the voice turns out,” Khairkhahan said.