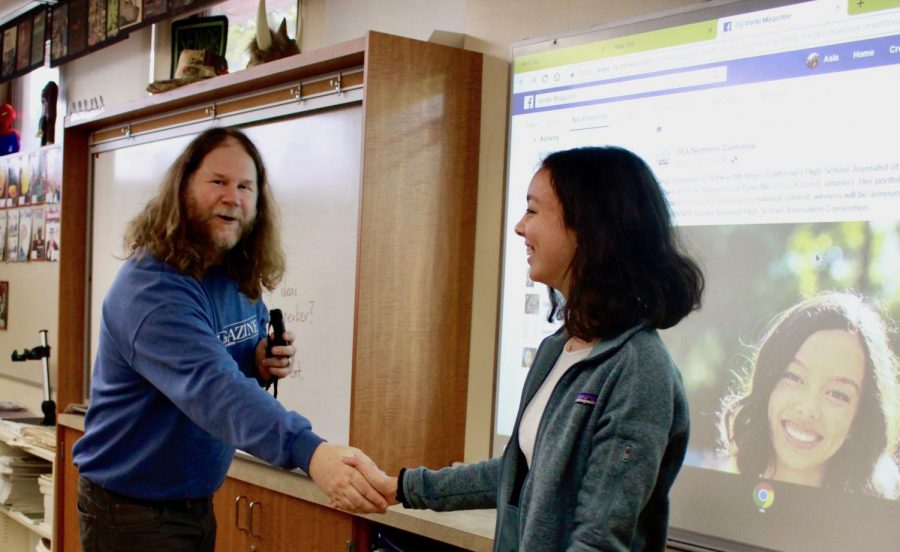 Senior Ashley Hitchings of Palo Alto High School is advancing to nationals after being selected as California’s Journalist of the Year.

Hitchings, a co-editor-in-chief of Verde Magazine, was notified earlier this month by JEA State Director Danielle Ryan. A panel reviewed Hitchings’ portfolio, which contains work from 11 sections of journalism. These areas include design, multimedia, news gathering, editing, and law and ethics.

As first place in the state, Hitchings will receive the Arnetta Garcin Memorial Scholarship, a $500 award. Additionally, her portfolio will be reviewed as part of the national contest, which will release its results in late April at the JEA/National Scholastic Press Association Spring National High School Journalism Convention in Anaheim.

“When I first began reading Verde in seventh grade, I never expected I’d one day be an editor, let alone be recognized for my work with the staff, so this all feels very surreal,” Hitchings said.

Hitchings is the fourth Paly student to receive this honor; Viking sports magazine editor George Brown (2011) and Verde editors Evelyn Wang (2013) and Jack Brook (2015) were given this award in past years.

Journalist of the Year is one of multiple journalism awards that Hitchings has won. In 2017, the JEANC awarded her with First Place Feature for “Case 09-13-5901,” a story about how former principal Kim Diorio tackled Title IX. Last year, Hitchings was also granted First Place Feature by the California Federation of Press Women for the “Diorio’s Dilemma” cover package.

“She [Hitchings] is one of the most caring, supportive people on our staff,” said senior Asia Gardias, who has worked alongside Hitchings as digital editor-in-chief for Verde. “She really lifts up the whole team, and on top of that, the work that she produces is magnificent.”

Hitchings now looks forward to nationals, and says she is grateful for the opportunity no matter what the outcome is.

“I’m hoping for the best, but at this point all I can do is wait,” Hitchings said. “It’s already a dream come true to receive California Journalist of the Year, so I feel honored to be in the running with such a passionate group of students.”