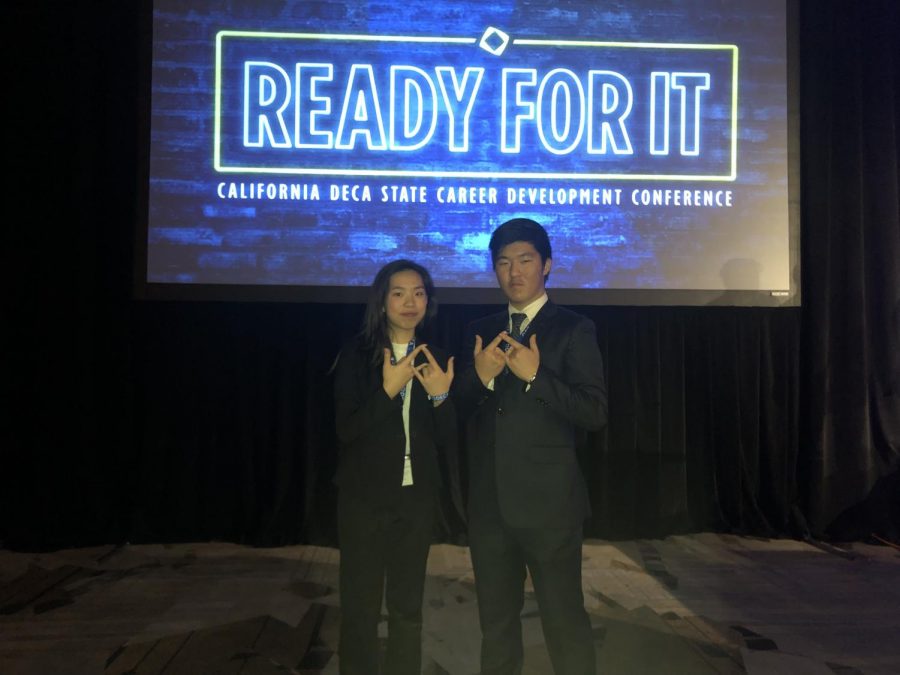 We are excited and grateful that we placed fourth at the DECA state conference," Tong said. Photo: Ria Pai" />

Betty Tsai and Junhyuk Kwak from Palo Alto High School's DECA Club pose for a picture at the State Career Development Conference last weekend in Anaheim. Members Elaine Han and Stephanie Tong placed fourth for their Creative Marketing Project and now have the chance to attend the International Career Development Conference, the annual DECA convention. "We are excited and grateful that we placed fourth at the DECA state conference," Tong said. Photo: Ria Pai

State competitors from the Distributive Education Clubs of America chose from over 100 categories and topics to participate in during the conference. Events in each topic included written, roleplay, testing and projects. The top 10 contestants were nominated as finalists, yet only the top four finalists were given the choice to attend the International Career Development Conference in late April.

Club members Elaine Han and Stephanie Tong placed fourth for their topic, and were the only Paly members that qualified for nationals. They chose to participate in the Creative Marketing Project, a research project in the field of marketing.

Han and Tong said they dedicated countless hours to complete their paper, a 20-page plan to form a livestream platform for clothing brands and stores. Through this, they aimed to challenge body-image stereotypes outlined by fashion warehouses, they said.

“Since we only had about 15 days to work on our 20 pages written portion of the conference, we had to quickly gather data from primary and secondary research,” Han said.

To complete their research, Han and Tong reached out peers and community members. They asked for feedback, which proved useful when creating their presentation, according to Tong.

“Starting out as a new club, we were glad that we earned our name in the first conference and [were] nominated as fourth in the awards ceremony, and going to ICDC,” Han said.

ICDC will take place in Florida this year, where over 18,000 high school students, advisers, businesspersons and alumni gather to enhance their skills for both college and career purposes. Han and Tong have not yet decided whether they will attend the convention.

Margo Wixsom, a Paly photography teacher, acted as the stand-in adviser for DECA over the weekend.

“I’m very clueless about DECA, but very enthusiastic about making sure that students get to do what they want,” Wixsom said.