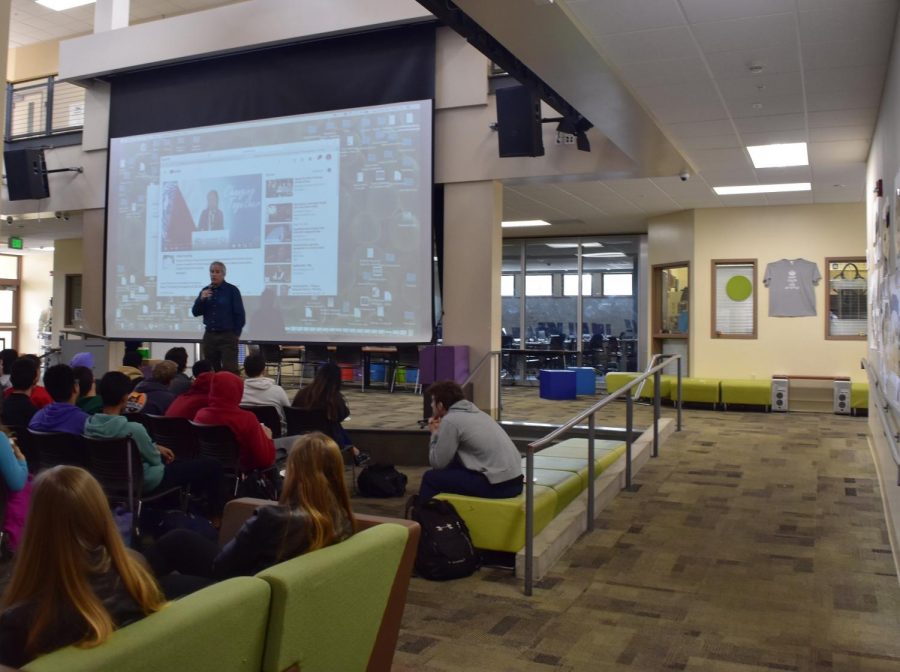 When President George W. Bush was elected, Drekmeier knew that not much was going to be done on the environmental front. This inspired him to run for city council. "Maybe if the cities lead, the nation will follow," Drekmeier said. Photo: Olivia Ramberg-Gomez

Drekmeier, now the policy director of the Tuolumne River Project and co-founder of Acterra, shared his experience working in the field of environmental conservation with students.

Growing up, Drekmeier loved the outdoors and spent a lot of his time in nature, eventually leading him into his future profession of working in environmental conservation, he said. In addition to his time outdoors, Drekmeier said he was also inspired by a handful of seminars that his parents, both Stanford professors, hosted at their home.

“One [seminar] was about social thought,” Drekmeier said. “Thinking about the world and how we can make it better.”

According to Drekmeier, seminars like these got him to consider what he could do in his life to make a change in the world.

“I didn’t really know what I wanted to do when I grew up,” Drekmeier said. “But I knew I had to do something to try make the world a better place.”

Drekmeier attended the University of California Berkeley, where he graduated with a degree in political science. After graduating, Drekmeier spent the summer collecting signatures for the First California Parks and Wildlife Initiative, with the goal of collecting 1,000 per week. Ultimately, the initiative qualified for the state ballot and won with 65 percent of the vote, according to Drekmeier.

After this experience, Drekmeier realized that there was a way for him to pursue a career in the field of environmental conservation, which had interested him for a long time.

Shortly after, Drekmeier was invited to work at the Pacific Energy and Resource Center, where he spent a year educating the public on renewable energy and energy conservation, helping to preserve the Pacific Rim.

Later on, Drekmeier worked for the organization Earth Day, where he helped Xerox become a green company, saving it billions each year, while simultaneously aiding the planet.

After working with Earth Day, Drekmeier helped co-found the company Bay Area Action, which is now known as Acterra. He is currently working with Acterra as a co-founder.

“Our goal was to carry on the message of Earth Day in the Bay Area and keep people engaged,” Drekmeier said.

Acterra not only educates people, but it also participates in protests and raises awareness of environmental issues.

In 2009, Drekmeier campaigned and was elected as Palo Alto mayor. According to Drekmeier, he wanted to be a part of city council so he could help Palo Alto with environmental conservation.

“Maybe if the cities lead, the nation will follow,” Drekmeier said.

For the past 11 years, Drekmeier has been working with the Tuolumne River Trust, an organization that guarantees the water from the Tuolumne River, located in Yosemite, California, is safe for drinking and safe for the wildlife that live in the surrounding area. One of its main goals is to educate people about where their water comes from, according to Drekmeier.

“It is key for us [Tuolumne River Trust] to hang in there and never give up,” Drekmeier said. “The odds are always against us, but it’s the small victories that keep us going.”

Career Month will continue today during lunch with Mary Minno, the product manager at Facebook and a current Google employee, in the MAC Atrium.