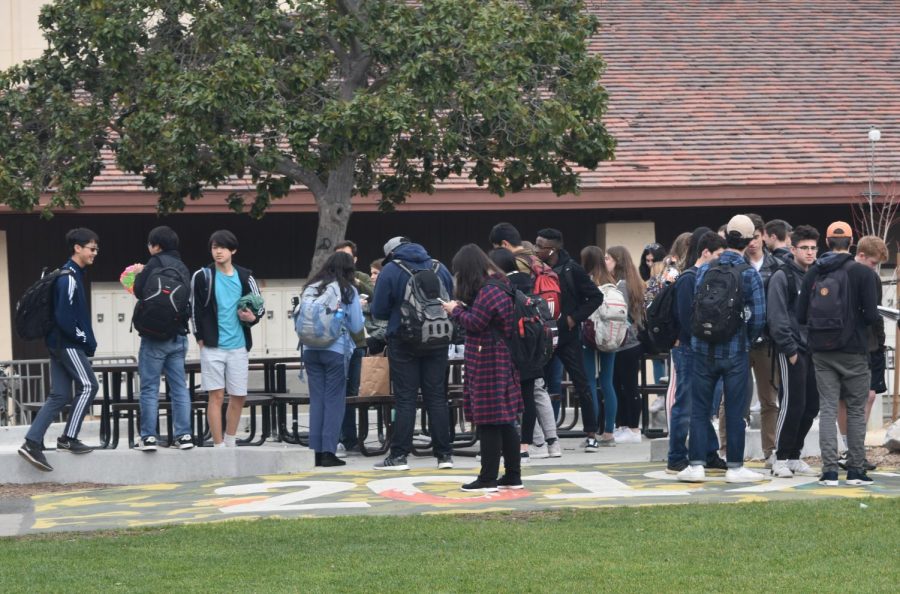 Seniors at Palo Alto High School are on edge with the commencement of the grade-wide Elimination game, which started last Friday during lunch amid a flurry of colorful beach balls.

The annual competition, which is organized by the Associated Student Body, aims to promote unity among the graduating class.

According to Senior Class President David Foster, over 300 seniors are participating in this entertaining and low-stakes event.

“That’s why I’m so excited for the game,” Foster said. “So many different people are playing from different backgrounds and social circles, and it brings the grade together.”

The game has not been a tradition at Paly for long, and Foster is unsure of the exact year that it was first played. Even though participation is optional, all seniors are encouraged to participate, as the winning player receives a prize that is yet to be determined. Last year’s prize was an Amazon gift card.

Each player is randomly assigned a target on the game’s website, and can tag the target with a given attack object: a beach ball. Due to a shortage of small beach balls, some students were given wiffle balls and larger beach balls. The beach ball can also be used for defense; players cannot be eliminated if they are holding their ball.

According to the game rules, once a player has tagged a target, the player acquires the target’s mark. The game will likely continue for months until there is only one winner, and the rules evolve over the course of the game, making it more challenging to stay safe from attackers.

The school has designated safe zones, which are outlined in the rules adapted by ASB from the game’s official website. These zones include most classrooms and extracurricular spaces, to avoid disrupting teachers and coaches.

As the game began, nervous seniors employed strategies to defend themselves from possible attackers.

“I’m trying to figure out right now if any seniors are staring at me, then I know they’re probably targeting me,” senior Zoe Stanton-Savitz said.

The game’s website, only accessible to participants, provides an updated status on all of the players, and shows that senior Caity Berry is one of a growing list of seniors who has already eliminated her target.

“I’ve been incredibly excited about Elimination since they did it last year, and I’m super honored to have already killed somebody,” Berry said. “It gives me a reason to talk to people I normally wouldn’t, so I’m so stoked to see where Elimination goes.”