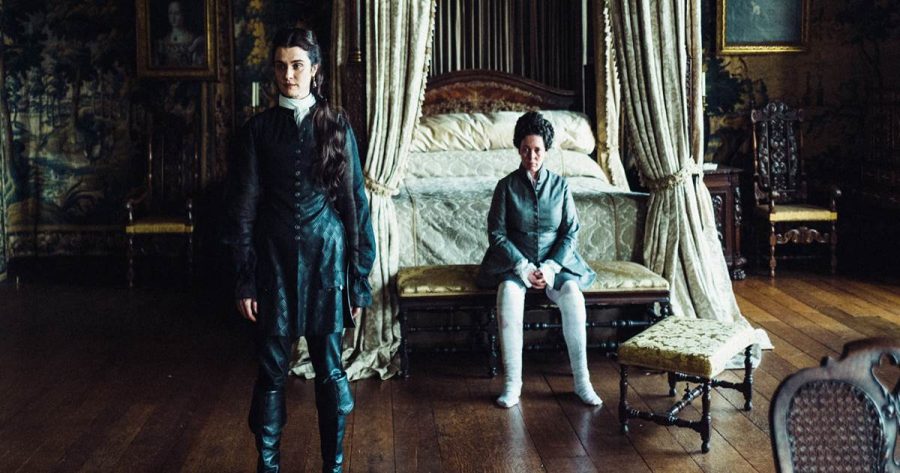 The movie follows Anne  (Olivia Colman), Queen of Great Britain (Olivia Colman) in the midst of her reign in the early 18th century. As Anne struggles to figure out her role as the leader of England during its war against France. Throughout the movie, her closest friend Lady Sarah Churchill (Rachel Weisz), and her charismatic new servant, Abigail Masham (Emma Stone), complete to gain her fullest attention.

Sarah uses her sexual pull over the queen to gain power and take charge of France during the war, making a series of unwise decisions while leading Britain. Unlike Lady Sarah, who pursues power and domination, Abigail only wants to regain the status of a lady, which was stripped away from her when her father traded her in a card game. Through seduction, Abigail crawls her way to the top by charming the queen. Queen Anne is portrayed as whining, crazed and emotionally unbalanced aristocrat, who struggles with both her role as a woman in society and her role as queen.

Although there is a clear plot, much of it is obscured by the overwhelming amount of sexual activity, making the storyline unremarkable. The frequent sex scenes between the female characters, which could be seen as unnecessary by some, actually are effective in portraying female sexuality during the 18th century. Regardless, two unbalanced women fighting to be the lady of the queen (the queen’s most trusted companion) does not make for an Oscar-worthy movie.

The costumes are a clear and eloquent representation of fashion during the time period—never overpowering enough to take away from the present scene, but designed uniquely enough for the viewer to admire them. The makeup is simple and natural, with the three main leads being specifically instructed by director Yorgos Lanthimos, not to wear makeup, according to the on-set makeup artist Nadia Stacey.

Music composer Komeil Hosseini’s mysterious classical score adds intensity to every scene, creating an overall mood for the movie. The score includes a range of artists, from classical composers like Bach and Purcell to Elton John’s ‘Skyline Pigeon’ playing during the credits.

What “The Favourite” lacks in meaning is made up of unique costume designs and beautiful set design.