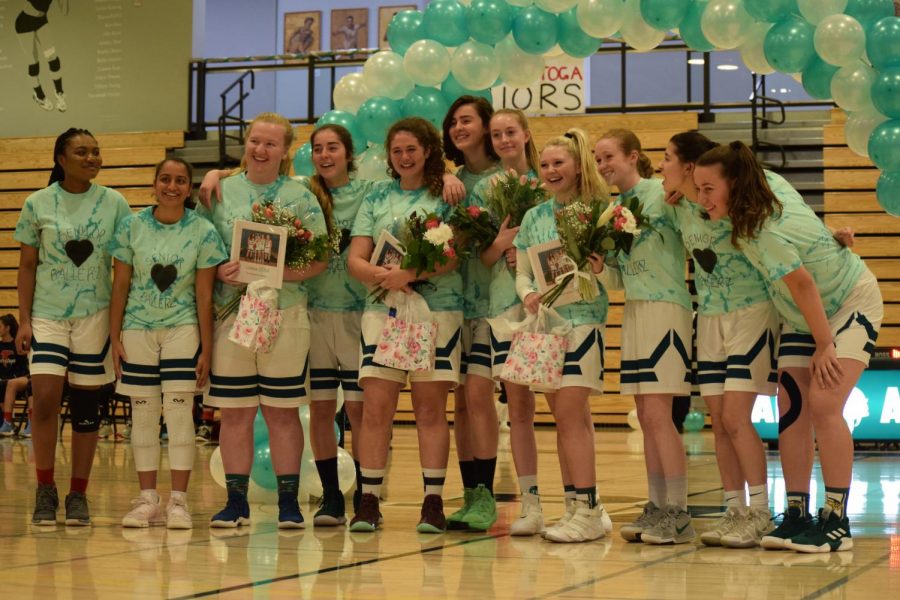 On an emotional night honoring its seniors, the playoff-bound Palo Alto High School girls’ basketball team (11-0) beat the Saratoga Falcons (4-7), 51-40, Monday in the Vikings’ final league game of the season.

Sophomore Annika Shah had an early basket in the first quarter, but the Falcons countered with a shot of their own after stealing the ball from the Vikings later on. The quarter ended in a tie, with both teams having 11 points on the scoreboard.

Following an exciting second quarter that left Paly ahead 27-19, the varsity cheer team took to the court for a halftime performance. The team presented its award-winning CCS routine, earning a round of applause from the fans.

The Vikings went on to score 15 more points in the third quarter, increasing their lead against the Falcons. Sophomore Carly Martin stole the ball from the Falcons and raced down the court for a layup, docking another two points for her team.

With four minutes on the clock in the final quarter of the game, senior Lauren Daniels sunk a three-pointer, further adding to the point tally.

The Vikings celebrated senior night, honoring Esme Stotland, Annie Niethammer, Ellie Jeffries and Lauren Daniel. The game began with a short ceremony, where the seniors received flowers and photobooks from their teammates.

“It’s just a lot of fun to always play with this group of girls, so it’s been the best senior season I could ask for,” Jeffries said.

The team now looks forward to participating in playoffs, and the Vikings’ perfect record will likely place them in a higher seed than their opponents.

“We’ll go to a playoff seeding meeting on Wednesday, and [that] will determine what division we’re playing in and where,” coach Scott Peters said. “We’re going to face tough competition, so we’ve got to work hard.”