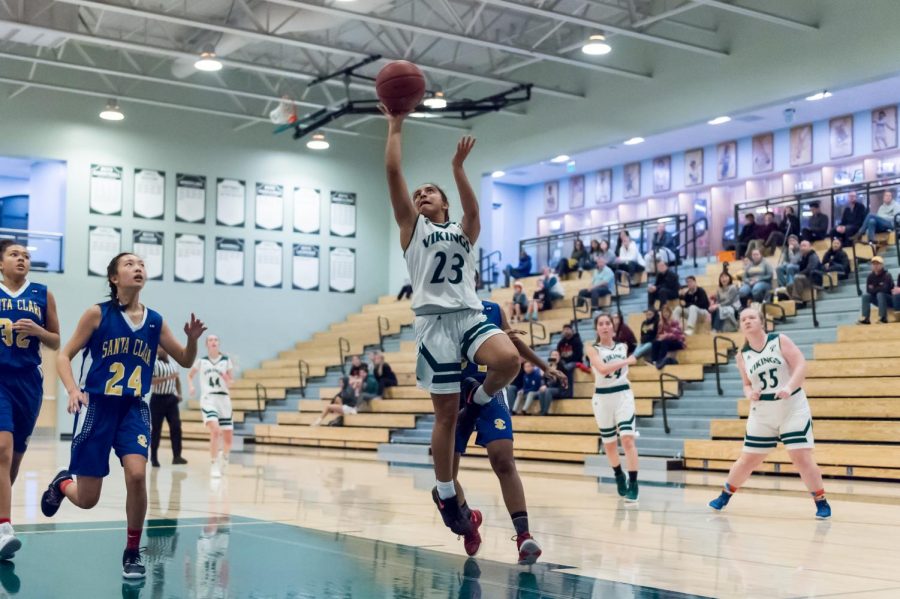 Sophomore Annika Shah goes in for a layup at a game against Santa Clara on Jan. 4. Photo by David Hickey

Have you ever noticed that more people want to watch a boys’ basketball game rather than a girls’? On Quad Nights in Palo Alto High School’s Peery Family Center, when empty stands during the girls’ games only start to fill up as the boys’ game draws near, the difference in crowd size is obvious.

Perhaps people think that the boys’ game is more interesting to watch. With fast-paced movements, the aggressive demeanor of the players or the overall energy of the team, the boys’ team definitely puts in their full energy, but so do the girls. However, the real problem lies in subconscious sexism in sports.

Whatever the reason, the overall size and support of the boys’ team to the girls’ is something both the players and spectators have noticed, according to many Paly students.

Even though the girls’ team has a much higher record (20-3) this season compared to the boys’ (13-9), the hype is still focused on the boys, according to senior Seattle Hmelar. Fans should have the same enthusiasm for the success of the girls’ team than they do for the boys’ team.

Hmelar is one student who notices the differences in the ways both teams play, with the boys’ playing more aggressive, which he says could be the reason why there is less of a crowd at the girls’ game.

“The boys’ team tends to take more chances during the game, whereas the girls are more about the fundamentals,” Hmelar said. “Obviously both teams play differently, but watching the guys play is more intense for me.”

Taking chances in a game is important, and definitely adds to the overall spontaneity, which the girls have lots of. According to junior Alana Abeyta, a guard on the girls’ team, from buzzer shots to fast turnovers, the girls’ team is constantly working on their craft.

Some athletes find that the size and energy of the crowd impacts the way they play.

Junior Louis Passarello, center on the boys’ team, said he loves the energy of the crowd and said it helps him feel supported by classmates and the community.

“I feel like the crowd size is an added bonus. They create an amazing environment,” Passarello said. “The crowd size does correlate with how we feel because there is a good vibe, and it feels like we have a lot of support from our school.”

Abeyta says that she and her teammates have noticed the difference in the crowd sizes, but that it doesn’t affect her performance.

“At this point, I think we have all learned to accept the fact that not as many people are going to want to watch girls’ basketball games over boys’ basketball,” Abeyta said. “So the crowd does not have a big impact on the way we play.”

According to Abeyta, it’s more important that there is pride and encouragement coming from the players on the bench. As long as teammates are excited, the performance of the team doesn’t reduce.  However, other teammates think differently.

According to Thea Enache, a freshman on the girls’ varsity basketball team, the crowd starts growing towards the end of their game because people are coming to watch the boys play. “It would be cool if fans would come from the beginning,” Enache said.

Sophomore Ilayda Turgut said she wishes the crowd for the girls’ teams was larger.

“People come early for the boys’ games, but I think they should show more support for the girls’ team because I don’t think we get the support that we want,” Turgut said.

The Paly administration has spent countless hours, both in person and through Schoology posts, addressing the issue of sportsmanship and inappropriate fan behavior at the boys’ games.  In addition to these efforts to create a better fan environment, they should popularize the girls’ games and promote gender equality in Paly sports.

While the girls’ team is used to having fewer fans and has learned to appreciate the encouragement of the bench, the girls should get to experience the same energy that the boys’ team is accustomed to.

At the end of the day, the issue resides in underlying issues of gender equality in sports.  But this issue can be fixed one step at a time if people start to show more support for the girls team, just as they do for the boys.

The girls’ basketball team is heading to the Central Coast Section competition this weekend. Be sure to show them the support and energy they deserve.