Students could enroll in medical interventions, audio production next year 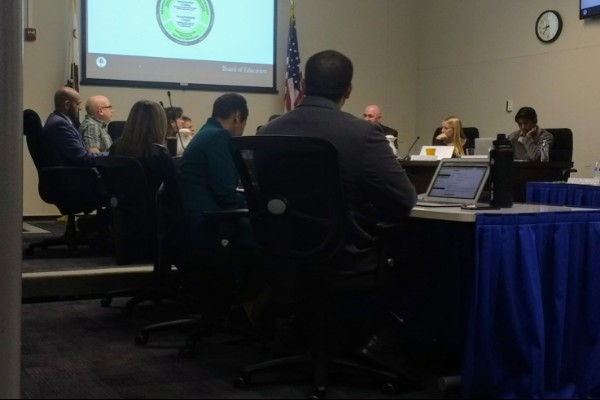 The Palo Alto Unified School District Board of Education discusses several new courses during a Tuesday meeting. The board expressed approval of the courses, but will vote to approve or reject them at the next board meeting. “The current events course is fascinating to me because a lot of educators that I’ve talked to have kind of lamented that societal developments tend to move so much faster than curriculum developments, and not just the current events part but media bias, which is such a huge issue when it comes to how we’re educating our students on civics,” board member Shounak Dharap said. Photo: Benjamin Huang.

Five new courses are likely to appear in the Palo Alto High School course catalog next year after members of the Palo Alto Unified School District Board of Education expressed their support during a board meeting Tuesday.

Sharon Ofek, the district’s chief academic officer, presented a total of seven courses to the board during the meeting. Paly will begin offering Tenor and Bass Choir, Medical Interventions, Medical Interventions Honors, Human Body Systems and Audio and Music Production if the courses are approved at a subsequent board meeting.

According to Ofek, student interest will be a major factor in determining whether or not the courses actually run.

“Just because they’re being presented here this evening for your approval doesn’t mean that we’ll see kids in them next year,” Ofek said to board members. “It’s based on their enrollment.”

Gunn High School will offer Advanced Placement Human Geography if the course is confirmed. Jane Lathrop Stanford Middle School will offer Current Events, an elective course devoted to the study of modern issues, if approved according to a course proposal document.

Tenor and Bass Choir is a course catering to students with lower singing voices. According to its course proposal document, it would allow such students to be a part of Paly Choirs, as current choir courses at Paly are designed for treble singers with higher voices. It will be taught by choir teacher Michael Najar if established.

Audio and Music Production offers instruction in audio recording and production and examines the impact of digital recording technology on modern society. Najar will also teach the course if approved.

Medical Interventions teaches students how to diagnose and treat diseases. According to its course proposal document, the course is divided up into four units: “how to fight infection,” “how to screen what is in your genes,” “how to conquer cancer” and “how to prevail when organs fail.”

Medical Interventions Honors, the same course but with honors credit, differs in that students are not allowed to use notes during exams.

Human Body Systems concerns the interactions between organs in the body, such as muscles, skin, the nervous system and the respiratory system.

According to Olah, the three courses are part of the Project Lead The Way curriculum, which emphasizes hands-on learning, taught to freshmen taking Biology or Biology Honors

“These two classes, the Human Body Systems and Medical Interventions, are the next two steps to the class [Biology],” Olah said. “So it kind of logically makes sense, like, ‘Okay we’re having success with this first one, let’s see how the next two steps go.’  We’ve gotten feedback on how the students and teachers too seem to really enjoy the hands-on stuff in the Biology and Biology H classes.”

However, only juniors and seniors would be able to take the three courses.

The board members expressed satisfaction with the proposed courses after Ofek summarized them.

Collins credited the new courses to the enthusiasm of PAUSD’s teaching staff.

“The source [of the courses] always is the enthusiasm of our faculty, who find their passion in bringing new instructional opportunities, new subjects, new ways to teach and new material to our students, and in my mind, that’s the core of a lot of what good education is,” Collins said. “It starts with faculty and teachers who are passionate about bringing knowledge to these students.”

Senior Class President David Foster also addressed the board, saying that while the proposed new courses would be a welcome addition, Paly is in need of new history electives.

“I think it’s important for students such as myself who are more interested in the humanities to be able to have those options,” Foster said. “You [Ofek] mentioned rounded course offerings. I think what would be very beneficial is if the board would look at offering more history courses to students at Paly and at Gunn.”

“How many years have I heard from Paly students that they’d like to see some history electives?” Baten Caswell said. “And I know we have to have excited teachers in order for that to happen. Is is there a way to get that excitement going?”

The board is set to vote on the approval of the seven courses at its next board meeting on Feb. 12.