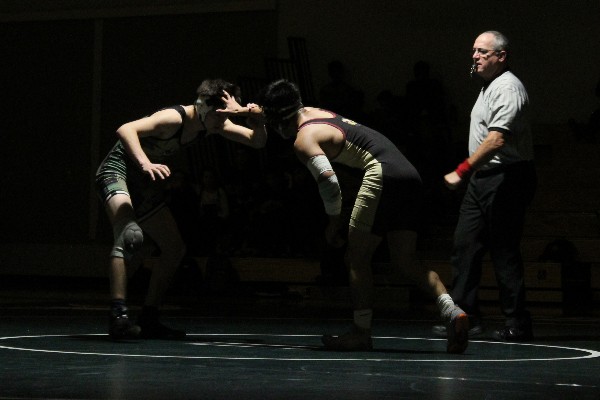 Sophomore Halo Lynch faces off against his opponent, Cupertino junior Ean Bennett, during a dual meet on Thursday at Palo Alto High School. Head coach Jon Kessler said that the team performed well overall. “I thought we did pretty good, maybe more so finishing guys when they were on their back," Kessler said. "We were holding them on their back and doing a better job of keeping them there."

Resounding cheers from the audience filled the Palo Alto High School wrestling room on Thursday as Paly sophomore Halo Lynch held his opponent, Cupertino High School junior Ean Bennett, down to win his bout. The Vikings dominated the Pioneers, winning 51-21 in their first dual meet of the season.

The Vikings took an early lead, with senior wrestlers Charlie Williams and Aidan Gans both defeating their opponents and putting Paly up 12 points.

Williams said that he could have improved his performance despite winning the match.

“The guy I was wrestling was not the best, so I knew that going in, and I was kind of hoping I would be able to pin him in the first 30 seconds, which I couldn’t do,” Williams said. “I was kind of sloppy, but I did eventually pin him in the second period, so it was a sort of mediocre performance.”

The Pioneers came surging back when two Paly wrestlers, junior Macguire Ferrell and freshman Omid Saffary, lost to their respective opponents, tying up the score at 12-12.

“Our lightest guy, 106 [pounds], Max Felter, he’s been doing a good job for us, and he just got down in weight, so he looks pretty strong at that weight,” Kessler said.

Team captain Andrew Wang (4-0), a 2018 state meet qualifier and Central Coast Section finalist, wrestled for the first time since being diagnosed with tendinitis and a sprained ankle earlier in the season. He defeated his opponent 19-4, adding five points to Paly’s score.

“Andrew just came back from injury, so it was nice to have him out there, especially whenever you have a home dual [meet] and you’re a senior,” Kessler said. “He just needs to get back in the flow of things and wrestle.”

Wang said that he was proud of his overall performance.

“I’ve been out because of an unfortunate injury, so this is my first time being back on the mat in a while,” Wang said. “I was really glad to get back on and get back in pace. I think I wrestled pretty well, for the time I’ve been gone. There’s a few points where I need to improve, but they’re all adjustable, and I’ll get right back at it.”

Sophomore Halo Lynch struggled with his opponent, junior Ean Bennett of Cupertino, for two rounds, with the score locked at 2-2. However, in the last 10 seconds of the third and final round, Lynch executed a “near fall,” a move where one wrestler holds down and nearly pins the other, and won the bout.

Kessler said that the team’s goals for the rest of the season include winning the Santa Clara Valley Athletic League tournament and the CCS championships.

The Vikings are currently ranked No. 7 in CCS prior to the meet, according to the dual meet program.

Wang said that his personal goal was to better his achievements from the previous season.

“I think I can get even higher than I did last year, I’m really looking to aim to place at states, get the highest that I can and leave Paly with my own mark,” Wang said.

The Viking wrestling team’s next meet is the Wildcat Invitational on Saturday, Jan. 12, at Los Gatos High School.