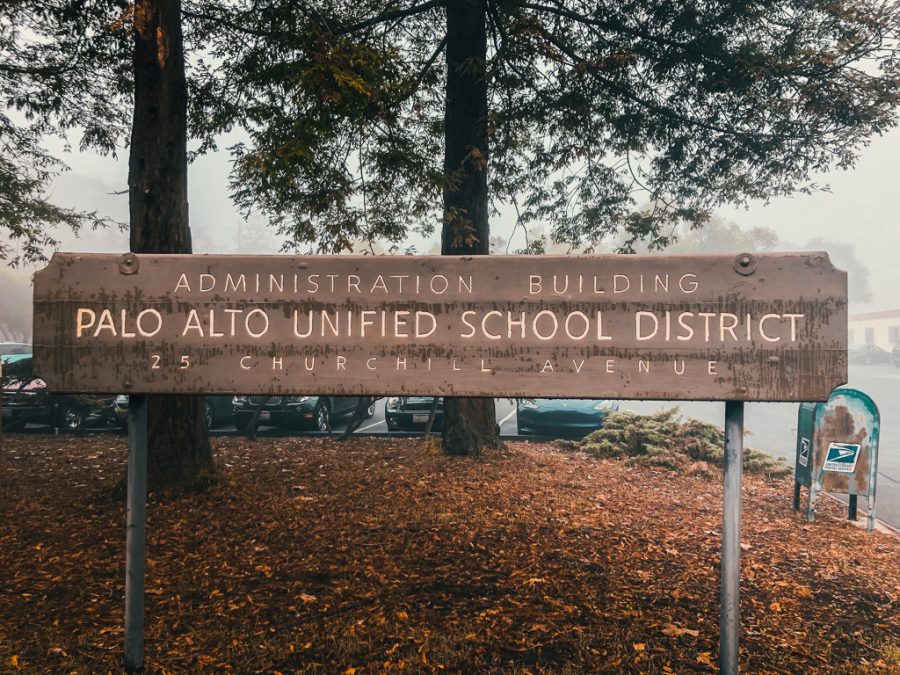 This sign stands outside of the Palo Alto Unified School District office, where the administration is busy building a crisis response team to give support to staff and students in the wake of the death Greene middle school teacher, Kyle Hart, was shot after an alleged suicide attempt. Principal Adam Paulson said that the crisis team is instrumental in helping students cope. “Anytime we have something happen in our community we get together in what’s called a crisis team, simply it’s just a nice way to make sure that all students and staff are offered support,” Paulson said. Photo: Margaret Li

The Palo Alto Unified School District community is coming together to cope with the death of a teacher at a middle school in the district who was shot and killed by officers of the Redwood City Police Department Monday morning outside his home after he attempted suicide, according to a police report.

Kyle Hart, 33, had been a teacher in the school district for seven years. He first taught social studies at Jane Lathrop Stanford Middle School and moved to Greene Middle School, formerly Jordan Middle School, three years later during the 2016-2017 school year, where he taught eighth grade social studies, according to the Greene staff directory.

“Anytime we have something happen in our community, we get together in what’s called a crisis team,” Paulson said. “It’s just a nice way to make sure that all students and staff are offered the support.”

Paulson sent an email Tuesday morning to staff containing information on how to best support students dealing with the crisis, as well as some resources to help them.

Assistant Principal Katya Villalobos posted a message on Schoology that advised students to go to the Wellness Center if they needed support, and provided phone numbers for suicide prevention and crisis hotlines.

District Supt. Donald Austin advised staff in an email Tuesday morning to talk with students about Hart’s death and help them process their emotions.

Campus Supervisor Norma Hymes, who knew Hart personally from her time working at then-Jordan Middle School, said she was shocked by his death.

“I worked at Jordan for 11 years, and I used to talk to him every day last year, because I would spend an hour there every day,” Hynes said. “It’s just horrible, they just had a baby last week, and it’s just very sad. The staff is very shocked — I just left from Greene and the overall feeling is shock. It’s hard because you never really know what people are going through. The students at Greene left a lot of notes on his door this morning.”

Hynes expressed confidence that the district’s efforts would help students deal with the tragedy.

“They had an email sent out yesterday at Jordan [Greene] letting the parents, students and staff know what happened, and that there are services to help them if needed,” Hynes said. “I’m sure the district is doing everything they can do.”

One of Hart’s former students at JLS, junior Claire Li, said she was shocked by the news and felt sympathy for his family.

“Overall I thought Mr. Hart was a good teacher,” Li said. “He was just really nice and he taught us a lot. At first I think I was just really shocked because he seemed fine, and he also has two kids and a wife so I felt really bad for them.”

Assistant Principal Katya Villalobos said that Hart’s family asked for administrators to provide only limited details about Hart’s death, in order to respect their privacy.

“The family has asked the district and the schools in general, to keep it as private as possible,” Villalobos said.

Many of Hart’s students say they will remember him as a beloved teacher.

Freshman Mateo Fesslmeier, who knew Hart at Greene Middle School, was alarmed by the news and said he found Hart to be an inspirational and caring person.

“In eighth grade [at Jordan] I would see him walking around and I had this Santa Barbara college sweatshirt, and he would always say, ‘Go Gauchos!’” Fesslmeier said. “I was really shocked by what happened but I think this can open up a new discussion into depression.”

According to the Redwood City Police Department report, officers responded to a 911 call from Hart’s wife, who said that her husband was attempting suicide. When officers arrived on the scene, they found Hart holding a knife, which he refused to drop after officers ordered him to do so.

The press release stated that Hart then ran at the officers, who attempted to use a Taser to subdue him but were unable to. One of the officers discharged his firearm at Hart. Hart was taken to Stanford Hospital but succumbed to his injuries, the report said.

The San Mateo County District’s Attorney Office is currently investigating the event and advises anyone who has information about it to call 650-363-4636.