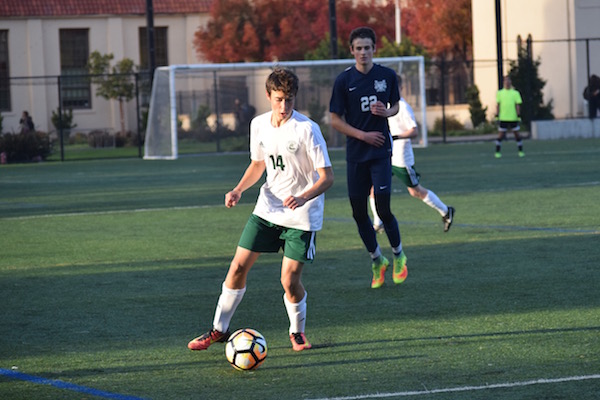 After going 12-4-3 in the regular season and losing in the third round of the Central Coast Section Playoffs last year, the Palo Alto High School boys’ soccer team is looking to avenge its playoff struggles this year.

The team ended last season on a rough note, losing 1-2 in the semifinals of the CCS Playoffs to Bellarmine High School.

Senior midfielder Leyton Ho said the tough loss has motivated the returning players this upcoming year and that the team has many new players that are ready to contribute this year.

“We lost many great players, but guys are already starting to step up,” Ho said.

This season, the team will be led by Ho and senior forward Jason Shorin. Shorin, who elected to play club soccer for the Palo Alto Soccer Club last year instead of playing for the school, is back on the Vikings’ roster this season and is hoping to pick up where he left off during his sophomore season.

“It’s the beginning of the season but we’ve got a lot of really talented players, and I think as the season progresses, we will become a more cohesive unit as we learn to play to each other’s strengths,” Shorin said.

Going into the season, Ho said there are many goals the team hopes to achieve.

“Our main goals are placing first in the league and winning CCS,” Ho said. “We came close to both goals last year, so we are even hungrier this year.”

Shorin reiterated Ho’s team goals for the season and said that he is looking to have a great impact on the team’s success.

“I think we’ve got a lot of talented players and it if it all comes together we could have a great season,” Shorin said. “Personally, I just want to do whatever I can to help the team win games.”

Shorin played a big role in all three games, and said that he was proud of how the team fought back after going down 1-0 against Alvarez.

“In our game against Alvarez, the defense was great and the offense created a lot of opportunities, but we need to get better at finishing them,” Shorin said.

Ho said he thought the team played well through the first three games and was able to share the ball effectively.

“It’s still early in the season and we have a lot to improve on, but our team chemistry this year is already pretty strong.”

The Vikings will face San Benito High School in their next match at 4:45 on Thursday at home.