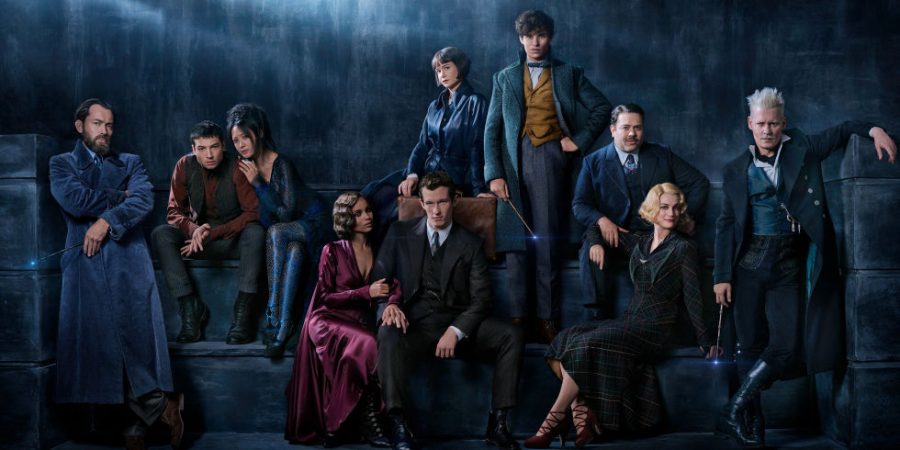 It’s America, 1927, and a tall, darkly clothed prisoner with jet-blond hair is moving to England to face further punishment for his crimes. But this is no ordinary prisoner; the captive’s power is feared. His tongue was cut out to ensure no magic utterances escape his lips, and every magical reinforcement cast to ensure he does not escape. This wizard is the infamous Gellert Grindelwald (Johnny Depp). Through an intense, climatic opening scene, viewers quickly learn that a prison break is child’s play for this dark sorcerer and those who defy him will dearly pay.

In the second movie in the Fantastic Beasts franchise, “The Crimes of Grindelwald,” viewers yet again enter into J.K. Rowling’s magical world of wizardry and witchcraft. Set a half century before Harry Potter walked the halls of Hogwarts, “The Crimes of Grindelwald” continues the story of Newt Scamander (Eddie Redmayne), a magical zoologist, first introduced in the previous film “Fantastic Beasts and Where to Find Them.”

Picking up three months after the first film, Scamander is banned from international travel by the Ministry of Magic because of the magical chaos that took place during his last trip to New York.

However, the magical world finds that the unstable Credence (Ezra Miller), an obscurial who has a dangerous dark force within him, is on the loose. Scamander is urged by a young Albus Dumbledore (Jude Law), the Defense Against the Dark Arts professor at Hogwarts in this time period, to illegally travel to Paris to track Credence down before the newly escaped Grindelwald finds him and urges him to join his side.

Along the way, returning characters join Scamander, including Jacob Kowalski, a regular human without magical powers, and witches Porpentina “Tina” (Katherine Waterston) and Queenie (Allison Sudol) Goldstein, who are sisters. Scamander, who is in love with Tina Goldstein, but too shy to tell her for much of the film is endearing to watch, as he tries to figure out how to convey his attraction.

A multitude of new, intriguing characters are also introduced including Nagini (Claudia Kim), a magical being who can turn into a large black snake. Theseus Scamander (Callum Turner), Newt’s brother who is a head member of the Ministry of Magic, and Leta Lestrange (Zoe Kravitz), who is Theseus’s fiancee with a troubled past, are also interwoven into the main story line. Finally, Yusuf Kama (William Nadylam), becomes a critical player, as viewers learn he too avidly looks for Credence’s whereabouts.

The movie is highly enjoyable, with elements present in the original Harry Potter series making an appearance, such as the Mirror of Erised, Polyjuice Potion, and Portkeys. However despite the references to past movies which Harry Potter fans will enjoy, the plot is confusing. The directors, who seem to assume that the audience would immediately remember every detail from the previous movie, do not provide enough context to bridge between the two. Lacking character development of new characters, there is no backstory to how many came to be or their connection to the wizarding world.  Although the directors had so much potential to make this one of the most intriguing and well-directed movies out of the Harry Potter franchise with some of Hollywood’s finest actors such as Depp, Redmayne, Law,  Miller and Kravitz, the directors fail to deliver.

The scene switches lack clarity, leaving viewers confused. Even Harry Potter fans are not able to connect the dots between what each scene adds to the plot.

Although the acting is quite good, Redmayne’s character, Newt, is annoying, from his silly sideways walk to how he always looks down while talking. Although Newt is supposed to be a antisocial character,  the directors take this past the limit. However, other characters are far more enjoyable to watch. Depp plays the perfect villain with his deathly stare and evil tone. More appearances of Kravitz’s and Miller’s backstory would have been a good addition to provide the audience with more context.

The costume designer, Colleen Atwood, does an incredible job of creating outfits that fit the wizarding world and the personalities of each character, as seen from Grindelwald’s villainous attire to Dumbledore’s sophisticated, yet approachable suit.

The visual effects of the movie are realistic and make the audience jump out of their seats every time a monster crawls out of Scamander’s briefcase. The effects on the Portkeys and Polyjuice potion are fluidly portrayed, showing teleportation and shape shifting as common, easy tools. Each detail is vividly described, bringing the wizarding world to life yet again.

Overall, the $200 million movie has great visuals but poor directing, making it a good, but flawed addition to the Harry Potter franchise.

“Fantastic Beasts: The Crimes of Grindelwald”