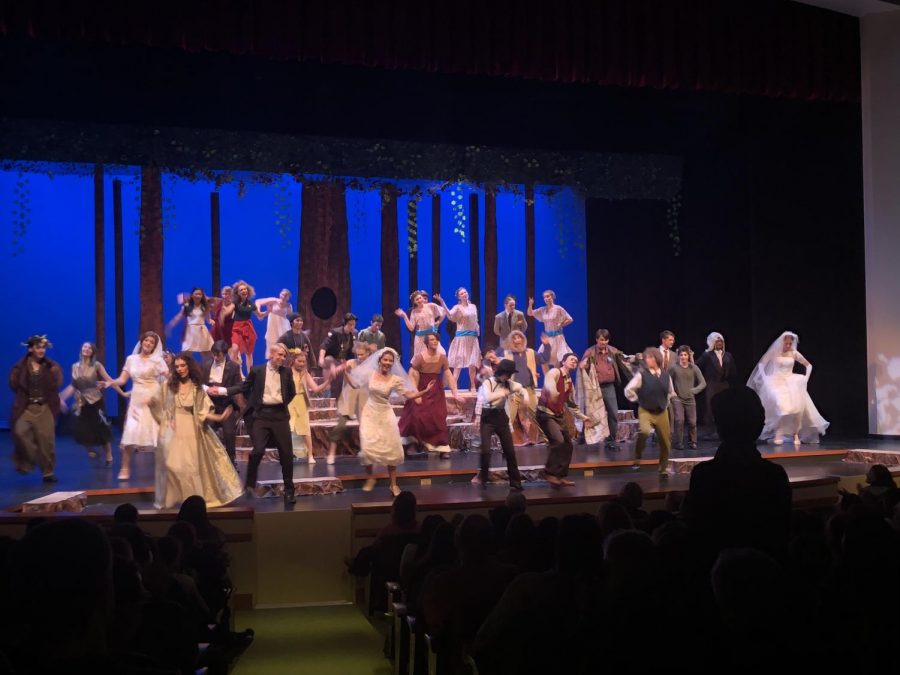 The show began with an unusual start: The musical group played from the lobby and continued to the theater, leading the audience to their seats. Cast members scurried around, holding a wedding cake over people’s heads as part of the pre-show.

The first scene was a wedding introducing the main characters: Lysander, Hermia, Demetrius and Helena, who are entangled in a love triangle of sorts. Demetrius is engaged to Hermia while Hermia only has eyes for Lysander, and Helena wants Demetrius more than ever. Meanwhile, Oberon (Ashutosh Bhown), the king of all fairies, asks his trickster servant Puck (Aida Mohammad) to dose fairy queen Titania (Devony Hof) with a love potion in order to manipulate her. Because of the spell, there are confusions that cause the spells to reach Lysander and Demetrius, making them fall in love with Helena instead of Hermia. Meanwhile, a theatrical group of actors prepares for their own play until Puck turns their lead, Bottom (Gil Weissman), into a half donkey, with whom Titania ends up falling in love.

“I think there were six of us and we really got to know each other,” Zoe Stanton-Savitz, who plays Starveling, said. “We really bonded and we got to find little moments of comedy that weren’t really scripted. It was really fun getting to know my cast members and discovering my character.”

The actors did an impressive job of accurately performing Shakespeare’s dialogues with their own voice and attitude. Weissman, who played Bottom, served as comic relief and kept the audience laughing. The scenes between Hof as Titania and Weissman as Bottom were some of the best parts, as her spell-inflicted adoration of him was hilarious in comparison to his silly character. Feenstra, who played Helena, portrayed a humorous and believable display of unrequited affection as she chased after Vetter, who played Demetrius, desperately trying to get him to love her. Massoudi, as Hermia, displayed her ferocity throughout the tangled confusion of love spells; one of her best acting moments was when she comically carried a suitcase as if it were full of weights.

The highlight of the play was the final scene, in which six actors put together an unintentionally terrible but funny performance for the wedding of Theseus and Hippolyta, especially the death scene between Flute (Cameron Miller) and Weissman as Bottom.

“It was really fun because I got to play a drunk person, so I was literally drinking from a flask the whole time, and I’m also carried [by Max Klein] the whole show,” Stanton-Savitz said.

The backdrop and scenery of the stage was beautiful and very professional, with several trees in the background as well as Greek columns for the wedding scenes. The actors took advantage of every single stage prop by stepping, jumping, kicking and falling over it to create a realistic scene.

The play was a hilarious take on Shakespeare’s classic, “A Midsummer Night’s Dream.” The next Paly theater production is “Play in a Day” at 7:30 p.m on Dec. 22 in the Performing Arts Center, and the next audition for the play “Guys & Dolls” will take place from Dec. 11 to 14 in the PAC as well.