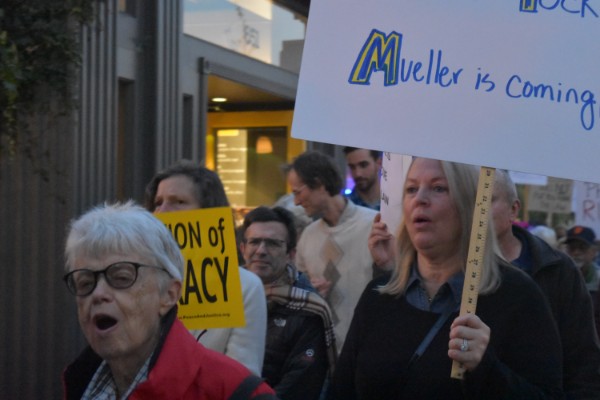 Protesters holding signs and chanting slogans march toward the Palo Alto City Hall. Both old and young attended the rally, which was in protest against President Donald Trump's appointing of Matthew Whitaker as Attorney General. "I do hope young people do get involved," rally organizer Paul George said. "They've been really inspiring to me in this past year ... you don't have to be old enough to vote to be participating in the decisions in our country, so I hope young people will keep that in mind and find some way to get involved on an issue that interests them." 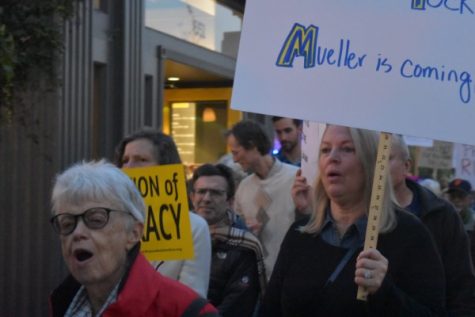 Protesters holding signs and chanting slogans march toward the Palo Alto City Hall this evening. People of a variety of ages attended the rally in protest against President Donald Trump’s appointment of Matthew Whitaker as acting Attorney General. “I do hope young people do get involved,” rally organizer Paul George said. “You don’t have to be old enough to vote to be participating in the decisions in our country, so I hope young people will keep that in mind and find some way to get involved on an issue that interests them.” Photo: Benjamin Huang

Protesters formed a crowd of over 800 in front of Palo Alto City Hall on Thursday to protest President Donald Trump’s recent replacement of Attorney General Jeff Sessions with Matthew Whitaker.

The Peninsula Peace and Justice Center, a grassroots activist organization based in Palo Alto, organized the rally as part of a wave of nationwide “Nobody is above the law” protests against Sessions’ replacement.

The “Nobody is above the law” protests were triggered by fears that Whitaker will hinder the ongoing Special Counsel investigation into Russian involvement regarding the 2016 presidential election.

Protesters bearing signs and chanting slogans such as “Whitaker, Whitaker, go away! Don’t come back another day!” first congregated in front of U.S. Rep. Anna Eshoo’s office on Emerson Street, before marching to the City Hall at 5:30 p.m.

At the City Hall, the protesters formed a circle and continued to chant slogans and cheer. The Raging Grannies, a political activist organization, led the protesters in singing parodies of songs modified to carry messages in support of the Special Counsel investigation.

“It [the rally] is to protest and call attention to the danger of the firing of Sessions … because of who’s replacing him, and the danger to the Mueller investigation and basically the danger to democracy,” Raging Grannies member Gail Sredanovic said. “It’s trying to educate people about exactly what the danger is and what we can do about it and just raise public awareness.”

LaDoris Cordell, a retired judge of the Superior Court of California, read an excerpt from a speech by Frederick Douglass as she spoke to the protesters, urging the audience to be politically active.

“I think we need more things like this [the rally],” Ghosh said. “I think that people need to organize and people need to fight. Even more important than that, people need to vote. … My classmates at Paly need to start getting more involved in this [politics] because we’re the ones who are actually going to be affected by this.”

“Holding a public demonstration is always to try to keep the conversation and the debate in the public, and we need everybody thinking about what’s happening in Washington right now,” George said. “This is the little thing that we can do to keep that out in the public sphere and in the public dialogue.”

There will be a second protest at 11 a.m. on Friday the Town and Country Village tomorrow.