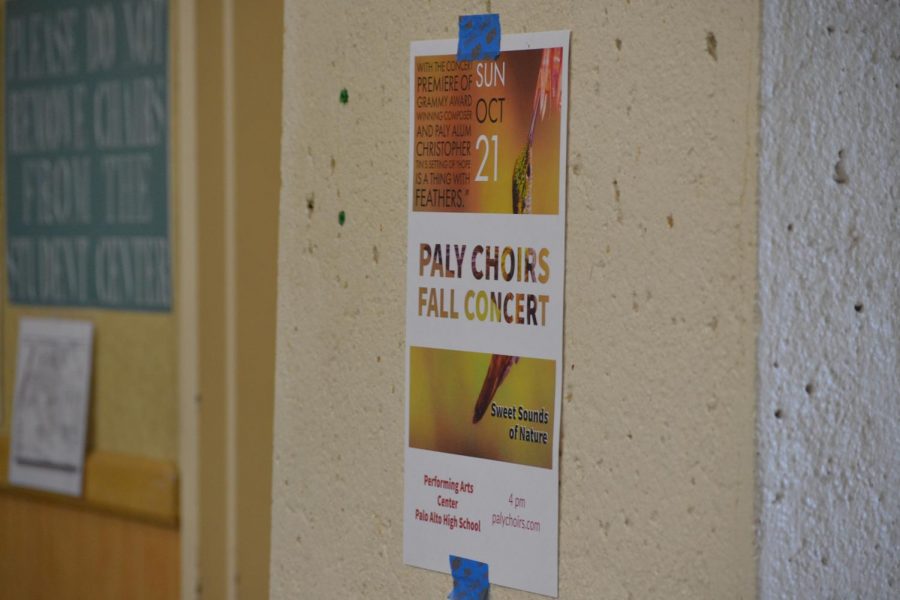 A poster for the Paly Choirs’ fall concert, “Sweet Sounds of Nature,” hangs in the student center on Thursday. The concert will feature all levels of Paly choir, as well as the song “Hope is a thing with feathers” by Christopher Tin, a Paly alumnus and Grammy award winner. “It should be a great concert and we’re hoping to see a lot of people there,” Madrigal singer and Paly senior Jessica Weiss said.

The Palo Alto High School Performing Arts Center will be filled with the melodies of orchestra and singing voices during the Paly Choirs’ fall concert, “Sweet Sounds of Nature,” on Sunday.

According to the Paly Choir website, the program includes “Water Night” by Eric Whitacre, “El Grillo” by Josquin des Prez and “I Know a Bird” by Emma Lou Diner.

“It’s really quite lovely; it’s that piece’s debut,” Weiss said. “We did sing it at the centennial [Paly’s centennial celebration], but this is its official debut. We’re all very excited because of the nature feeling, with the birds and feathers.”

The song was composed by Christopher Tin, a Paly alumnus who won a Grammy award in the Best Arrangement, Instruments, and Vocals category for his choral piece, “Baba Yetu,” in 2011.

According to Weiss, the fall concert serves as a kickoff for the rest of the season.

“It’s a way to showcase our new talent and everyone we’ve brought in,” Weiss said. “Our a capella groups will also be performing, all of the ensembles will perform, and it’s just sort of like a fun, fresh introductory concert.”

“Our madrigals are spot on,” Ho said. “I think our concert choir is also very spot on. Our a capella people are also going to be performing there,” Ho said.

Tickets can be purchased on the Paly Choir website.