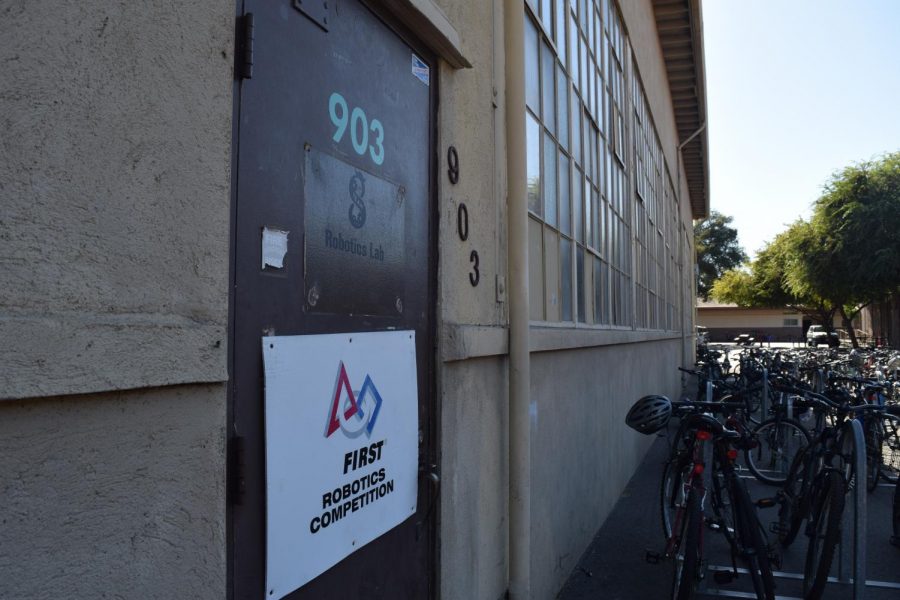 The Palo Alto High School robotics yard stands empty on Thursday after school. According to build team captain Lawrence Chang, the team’s head coach, Kathleen Krier, has prohibited students from being in a part of the lab without teacher supervision one of several new rules that have caused tensions between herself and the team. “Out of the blue, [she] says that she refuses to supervise the Java shop area,” Chang said. “I ask for clarification … and then she gets really angry at me, saying how I need to stop questioning her authority.” Photo: Benjamin Huang

Tensions are high between the Palo Alto High School robotics team and its new head coach after conflict erupted into the public spotlight at a Palo Alto Unified School District Board of Education meeting on Tuesday as several student leadership members and parent mentors took the podium during the open forum session to air their complaints.

Kathleen Krier, who replaced former head coach and computer science teacher Christopher Kuszmaul after he took a leave from Paly at the end of the 2017-2018 school year, has since caused the team to fall into a “downward spiral,” said senior Bryan Yang, the co-captain of the team.

“We support that some changes need to be made this year regarding safety and supervision,” Yang said at the meeting. “However, over the past couple of months, the new head coach has enforced a number of rules before taking the time to understand the nature and goals of the robotics team.”

In an interview on Thursday, Krier said that such changes have been enacted because in the past, students “casually” followed safety practices, including those related to eye, hair and bodily protection. Supervision, too, was overly relaxed, she said. In previous years, for example, the machine shop was accessible to students without a supervisor unlocking it, Krier said.

“From my background, we require always a teacher or somebody with a certificated credential to be in the room, and then add mentors and parents on top of that,” Krier said. “Whereas the past practice allowed parents to come and supervise without a certificated person.”

Krier, emphasizing the need for a minimally hazardous workshop environment, alluded to a Gunn robotics adage: “This isn’t Starbucks, it’s a machine shop.”

Some team members say the debate at Paly extends beyond safety issues.

According to Krier, concerns about the diversity of the team have given rise to additional contention between herself and team members, specifically about how to recruit a broader range of students.

“I felt very strongly that certain students should be on the team for diversity reasons, and the leadership didn’t feel the same way,” Krier said. “So I was very animated and passionate about adding diversity to our team because we’ve been criticized for that diversity piece in the past.”

However, due to this selection mindset and other perceived problems, former team captain Devin Ardeshna on Thursday filed a complaint with Meghan Farrell, the district’s contact on non-discrimination issues, alleging that Krier has put some ethnicities at a disadvantage for team acceptance.

“The students have never been in support of forcing a certain diversity among our members — we have always selected based on commitment and enthusiasm,” Xu said in an email. “However, we are very dedicated to trying to increase the overall diversity [of] our applicant pool, as it is one of the core values of FIRST [robotics competition organization].”

The diversity plan also said that one of Paly Robotics’ goals is to “increase the percentage of Hispanic students on our team, who made up 1 percent of our team in 2016, and currently compose 5 percent of the team membership [in 2017].”

Controversy related to attempts at diversification is not new to Paly Robotics, according to Krier, who said she noticed team members using labels on students supposedly chosen by the former head coach for diversity, not merit.

“People get identified [by team members] as ‘Kusz-picks’ from Mr. Kuszmaul, who was the previous teacher,” Krier said. “So if Mr. Kuszmaul wanted to add somebody to the membership who was perhaps adding diversity … then they would get identified by the student body in that very pejorative way.”

In an email, Xu rebutted Krier’s claim, saying that labels such as “Kusz-picks” were not prominent in the team’s culture.

“It seems to me that ‘Kusz picks’ were hyped up quite a bit,” Xu said in the email. “They were not … a major point of contention.”

Team members and Ardeshna have gone so far as to accuse Krier of other offenses related to her conduct, ranging from profane and emotionally charged language to intimidation.

In response to the tension between team members and Krier, the co-captains have attempted to organize meetings with the administration. These efforts caused further conflict.

“The students had a confirmed meeting with [Paly principal] Mr. [Adam] Paulson and [Paly assistant principal] Dr. [Tom] Keating this afternoon — they promised to listen to them,” parent mentor Marilee Soohoo said at Tuesday’s board meeting. “Their pleas for help were met with a last-minute cancellation of this meeting, citing that the students’ own parents weren’t welcome as silent observers.”

According to emails reviewed by The Paly Voice, Keating suggested cancelling a meeting originally scheduled for Tuesday afternoon, following an email from Yang insisting that parents be present “to observe and listen.” The meeting was set to include Keating, Paulson and robotics members, the emails show.

Although Paulson declined to answer specific questions about the cancelled meeting, he provided the following statement:

“Paly administration’s involvement in the Paly Robotics team over the last month has been to create a safer school environment and to hear and support student concerns. We needed to implement new rules and expectations to create a safer environment for our students working in the Robotics lab. Ultimately, some of the changes we are requiring are being met with resistance.

“I feel strongly in the support our team is extending to Paly Robotics. Dr. Keating is highly involved with the team attending meetings and recent meets. He will continue to be accessible for supervision on an on-going basis. This is Ms. Krier’s first year at Paly and I believe should be given an opportunity to lead the Robotics team.

“We have, and will continue to make sure our students feel safe and supported. All allegations and statements are receiving our full attention.”

Keating could not be reached for comment on Thursday.