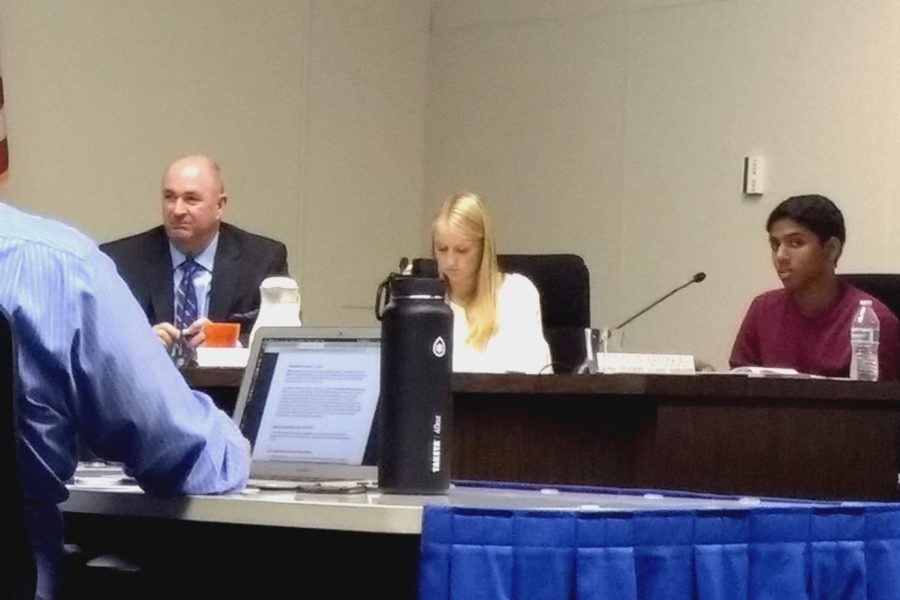 Palo Alto Unified School District superintendent Don Austin (left) and student board representatives Caroline Furrier (center) and Arjun Prabhakar (right) listen to a presentation about low CAASPP participation rates. Furrier suggested that teachers should try to clear up students' schedules during testing week. "Frankly, during the week of the testing, teachers don’t really make the workload any lighter and it’s kind of just another thing added on to the student’s plate," Furrier said.

The Palo Alto Unified School District Board of Education will be discussing methods of increasing student participation in state-mandated testing after dismal participation rates were revealed in a memo at a Tuesday board meeting.

The California Assessment of Student Performance and Progress, an annual statewide test that measures English and mathematics skills, is administered to grades 3-8 and 11 in the spring. Parents or guardians are allowed to exempt a child from testing under California Education Code 60615.

At the meeting, Christopher Kolar, the PAUSD director of research and assessment, presented a technical memo detailing CAASPP results and participation levels from the administration of the test in March 2018.

The memo also stated that many students at Gunn and Paly were “Not Tested,” signifying that they did not receive a parent-guardian exemption, but were not present on the testing day and did not attend the make-up test session.

“I think now we’re entering the second tier of challenge,” Kolar said. “It’s not the parents that we have to convince to not opt out, but we also have to look at the general findings that people don’t think it’s appropriate to take it at all.”

“This year it looks like the state finally landed on essentially a penalty for lack of participation rates, and that’s something that’s been discussed for months and months, and we finally received clarification about what that would be,” Austin said.

Kolar clarified the penalty that Austin referenced, saying that CAASPP scores are one measurement assessed by the California School Dashboard, which “shows how local educational agencies and schools are performing on the state and local indicators included in California’s school accountability system,” according to the website.

According to the memo, schools that do not achieve a 95 percent participation rate threshold in testing are penalized by having points deducted from the Academic Indicator section of the dashboard, which measures how close average student CAASPP scores are to a certain benchmark range.

Austin said that the low participation rates were worrisome.

“This is a district that takes pride in being ranked #1 in the state of California, and if we’re being penalized for low participation rates, that’s something that may be of interest,” Austin said.

According to the Dashboard, Paly students scored an average of 100.93 points above the lower end of Level 3 benchmark in the English and Language Arts section of the CAASPP, and an average of 99.5 points in Mathematics, in 2015, 2016, and 2017 test administrations.

Both of these scores place Palo Alto High School in the top 95th percentile among all high schools in California, according to a guide to the Dashboard.

However, that trend could change with the release of the 2018 edition of the Dashboard, which will deduct a number of points equal to a quarter of the difference between the 95 percent participation rate threshold and the actual participation rate.

Kolar said that one of the barriers preventing the district from achieving the 95% participation rate is the prevalent belief that the CAASPP is optional and therefore unnecessary.

“It comes back to something that we’ve talked about before, which is ‘what is the culture of testing that is being discussed in this community?’” Kolar said.

“You look at other districts around us, our neighboring districts. … There are some consequences of not coming to the test,” Baten Caswell said. “If this is important to us, we need to have consequences just like they do. We can just copy what they’re doing in Mountain View and Los Altos.”

According to the Mountain View-Los Altos School District website, all juniors are required to take CAASPP testing, with the exception of English learners and students taking alternate testing.

Student board representative and Paly senior Caroline Furrier suggested that incentives offered to students and lighter workloads during the week of CAASPP testing might increase participation rates.

“Instead of just educating the administrators to change the culture, I think you have to really sit down and talk to the teachers about the idea of, ‘If you really want students to take this test, how are you going to change their whole week?’” Furrier said.

Student board representative and Gunn senior Arjun Prabhakar agreed and said that the increase in participation rate at Gunn between 2017 and 2018 was likely due to incentives and teacher-student communication.

“I think a lot of the effective changes at Gunn last year were based on the incentives that Caroline was talking about,” Prabhakar said. “We added stuff like a barbecue that was offered if students took it and raffles that kids really liked.”

Board member Todd Collins said that the decision to take the CAASPP was a matter of civic duty.

“I really hope that we can get there [the 95 percent participation rate threshold] … because the vast, vast majority of other kids in the State of California take this test. They do their civic duty to help us and our education system in the best way they can,” Collins said.