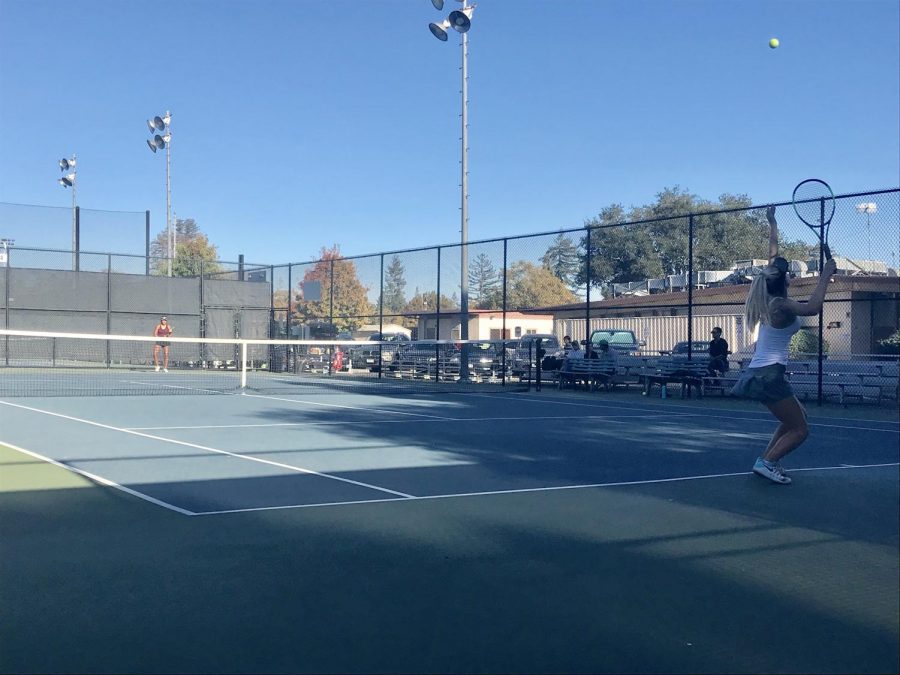 Despite the simmering 80 degree afternoon sun, the varsity tennis team’s sophomore captain Maddi Page walks on to the court calmly, wielding a sleek black and green Wilson Blade, her long blonde hair pulled back into an equally sleek, flowing ponytail. She sinks into a natural yet intimidating ready position as she waits for her opponent to serve, before springing into action.

Earlier this year, Page competed at Zonals, a week-long summer tournament in Salt Lake City.  She played in the 16s division (for age 16 and under), representing the Northern California section.

Page also plans to play in the 16s at this year’s HardCourts tournament in Orange County. Winners of the 18s win an automatic wild card to the U.S. Open, and like Cici Bellis and Sofia Kenin, they almost always become professional players.

“I’m not necessarily going to win it or be professional, but it’s just really cool to be in an environment with such great players, and that tournament [HardCourts] normally has college coaches watching every match, so it’s pretty intense,” Page said.

According to Page, these collegiate athletic recruiters greatly consider a player’s national and section ranking. As she hopes to play Division I tennis in college, she must work persistently to maintain her GPA  and her rankings.

Having to juggle school and grades is nothing new to Page. In eighth grade, Page started school at 7 a.m. every weekday to train at Advantage Tennis Academy in Orange County. Students at the academy started the day with over two hours of training before beginning a period of academics. Though teachers were present, the school delivered most of the curriculum online. After lunch, the day ended with another three hours of fitness and tennis training.

Her weekends in eighth grade were no break; Page almost always competed in tournaments. Unlike most tennis players, who begin playing casually with family or with a coach, Page has been competing since she started tennis at age nine.

Even after moving back to Palo Alto, Page spends hours of her weekend driving around California to tournaments. Balancing such a large time commitment on top of a social life has been a struggle for Page.

“It’s not a lot of down time, but you do what you love,” Page said. “It’s also taught me to be super organized and time-efficient. Something that tennis has taught me is that time is very important and managing it is all I do.”

On top of all of her personal tennis pursuits, Page is a captain of the varsity tennis team.

“I love Maddi, she’s a really fun person to be around and she definitely has the spirit to be a varsity captain,” sophomore teammate Myra Xu said. “She’s also an amazing tennis player and friend.”

Page’s athletic endeavors are not limited to tennis: Page been skiing since the age of three, and she previously swam competitively with PASA and played soccer. Additionally, she danced for five years, trying her hand at lyrical, hip hop, ballet, jazz and tap.