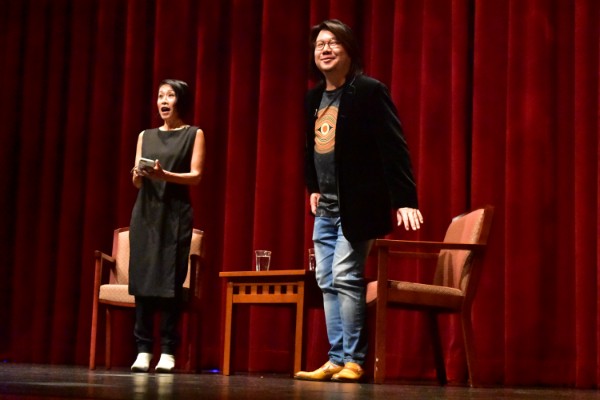 Kwan was born in Singapore, but moved with his family to Texas at age 11. Kwan described the process of immigrating to America as strange and shocking.

“I lived in a multi-generational home with my grandparents, my aunt lived there,” Kwan said. “It was like a big, bustling family house. Everyone’s always in your business. And I went from that to a small suburban house. I remember walking outside on the first day in Houston, Texas, and it was all quiet. You have all these little boxes, and these beautiful trimmed lawns. There was no one walking on the street, people were just driving.”

Kwan said that the death of his father, Samuel Kwan, in 2009 was a driving force behind his decision to begin writing.

“I think it was really the first time I had a sense of life being so fragile and impermanent,” Kwan said. “I always had this dream where I would one day write a book, maybe when I was 60 years old … just being with him [his father], and spending time, really reminded me that if you want to do something, and you really have a passion for something, do it now, because you never know what’s going to happen. So that’s how it began. It was a way to process my sadness.”

According to Kwan, his original vision of the book was a serious, meditative work.

“I really wanted to write this very, very serious … very thick, almost Tolstoyan book that would win all these literary prizes and five people would read it, basically,” Kwan said.

After graduating from the University of Houston, Kwan moved to New York and worked as a creative consultant, according to his website, as well as taking on other creative jobs.

“I worked for a dance company, I did set designs, I had made experimental movies for them,” Kwan said. “And I did a lot of photography. So I always had something going that was just for me, and then something else that was creative and could actually pay the rent.”

“I was commuting from New York to Chicago every week, like maybe once or twice a week, and I would have a lot of time in airports, it was during the winter, so every flight was delayed,” Kwan said. “So I would just take out my laptop and play with words, basically.”

According to Kwan, once he started to write, memories of Singapore came fresh in his mind despite not having returned since he moved to the United States.

“They [the memories] have been percolating in my head for over 20 years,” Kwan said. “I think it’s because I haven’t been back [to Singapore] since I was 11 years old. I think that because of that, all the memories are crystallized like amber, they’ve been swirling in my head and I’ve had so much time to process it. And when it was time to let it out, it was like a waterfall, it was kind of non-stop.”

His first manuscript, which he submitted to a literary agency, would have been almost immediately rejected if not for a curious junior agent, Kwan said.

“This junior agent looked down at the pile, she saw ‘Crazy Rich Asians,’ and she was like, ‘what the hell is this?’” Kwan said. “And she picked it up and she started reading, which is something agents never do … and by the end of the first chapter she told me she knew she wanted to sign me up.”

Hua asked Kwan if he’d re-read his books, drawing a laugh from the audience.

“Not from start to finish … but a lot of times I’ll be doing an interview or something, or someone will ask me a question … and I find myself getting lost in the book again,” Kwan said. “I’ll start reading somewhere, and I can’t stop reading, and I’ll be like, ‘who wrote this? I can’t believe I wrote this.’”

“For me he’s the creative cousin that no one respects, which was a role I was very comfortable playing in my family for ages,” Kwan said. “No one knew what I was really doing in New York … because it’s really hard to explain what I did for 15 years. Creative consultant? What does that really mean? I actually had one cousin say to me, ‘does that mean you’re creatively unemployed?’”

After the presentation, attendees eagerly formed a line to have copies of “Crazy Rich Asians” signed by Kwan.

Books Inc., a Bay Area-based bookstore, and Esther Wojcicki, the co-adviser of The Campanile, organized the presentation.

According to Wojcicki, other acclaimed authors will visit Paly this year to give presentations similar to Kwan’s. The next author to do so will be Lisa Brennan-Jobs, who will be discussing her memoir “Small Fry.”

“We are hoping this year to have more authors coming on a regular basis and to include the community in the use of these wonderful facilities [the Performing Arts Center and Media Arts Center],” Wojcicki said.

Amazing time at Palo Alto High with @books_inc and @khenghua last night. Thank you all for such a wonderful evening!