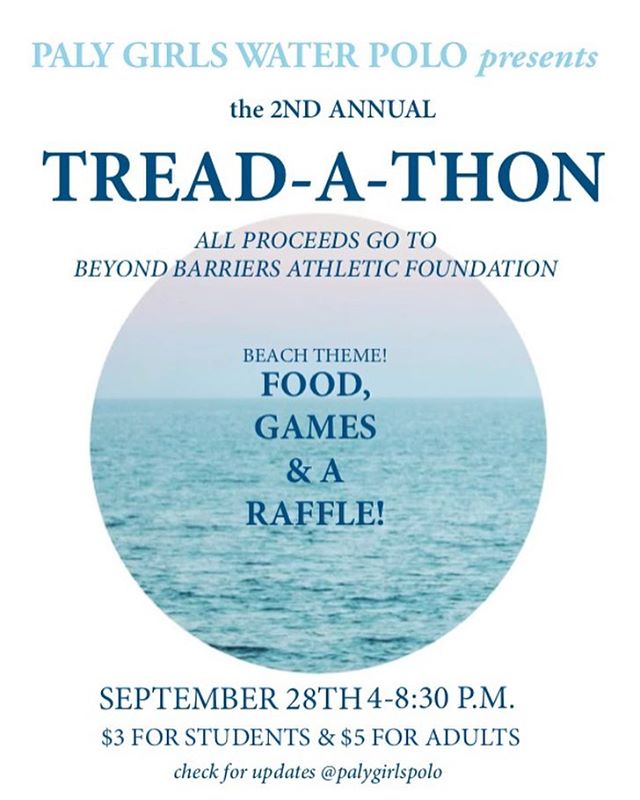 Students can participate in a belly-flop competition, watch a movie, and enjoy food, all while Palo Alto High School’s girls’ water polo  players tread water at the second annual Tread-a-thon hosted by the team today from 4 p.m. to 8 p.m. on the school’s pool deck.

Tickets to the Tread-a-thon are priced at $3 for children and $5 for adults. All proceeds will benefit the Beyond Barriers Athletic Foundation, according to Varsity Water Polo Captain Chesnie Cheung said.

“We are raising money for the Beyond Barriers Athletic Foundation, which is a foundation that gives scholarships for swim lessons and water polo to underprivileged children at community pools,” Cheung stated in a text.

Anyone interested in supporting the cause can sponsor one of the treading players. The more money pledged, the more difficult the challenge, according to Cheung.

Cheung is coordinating the event, and hopes to see greater participation from people not on the team.

“Last year it was a pretty big success but the only people participating were people from the Paly girls’ water polo team,” Cheung said. “This year, we hope to bring in a lot more people including water polo players from other schools and also non-water polo players.”

The event is beach themed and attendees will have the opportunity to enjoy different games, including a belly-flop competition. The film “Moana” will also be shown at 6:30 p.m.