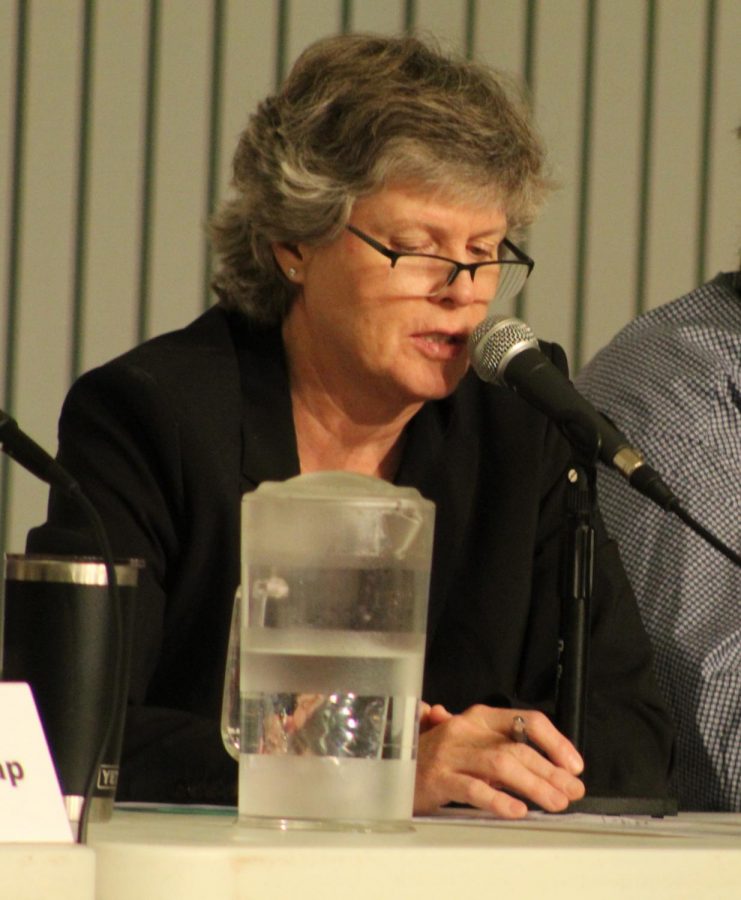 The Paly Voice sat down with Palo Alto Unified School District Board of Education candidate Kathy Jordan, a Paly parent who is building her campaign on a pledge to bring accountability to the district and prioritize student needs.

Editor’s Note: This is the second article in a five-part series about school board candidates. Check back tomorrow for the next installment. The below quotes are excerpts.

What prompted you to run for a seat on the school board?

I’m a parent. I’ve been a volunteer in the district. I really felt the voice of the community was not being fully heard or heeded. Of course, I became more involved in the district than I had been previously after the news came out about the sexual assault instances being handled at Paly. But there are other events that prompted me to get more involved, such as the six million dollar blunder. There’s the instructional minute deficit that has been happening at Paly and Gunn [Henry M. Gunn High School] that I became aware of. And the general lack of transparency and lack of accountability that surrounded all of these events. There was also a similar concern that took place when the weighted GPA issue was raised in that there seemed to be a message that discussion was not welcome.

Yes. I served as co-secretary for PTAC [Parent Teacher Association Council]. I also served as co-coordinator for the Parent Network at Paly for four years. …  I’ve always been a PTA [Parent Teacher Association] member. At Duveneck Elementary School, I received an honorary service award from the PTA when my youngest child graduated from there. I produced the yearbook with other friends for four years at Duveneck. Of course, I volunteered in the classroom like so many other parents. I took part in the Harvest carnival at Duveneck, organizing the obstacle course, all the kinds of things that so many of our parents do to help support our students and the school district in many ways.

What goals do you hope to accomplish should you be elected to the school board?

I would work toward fiscal responsibility, making sure that our students come first, transparency and accountability in the board and in the district, and academic excellence for all of our students.

Transparency sounds like one of your core values. What are some of the steps that you would take to ensure greater transparency?

It’s a public school district, so it’s a public entity as you know. There are certain obligations that a school district has to be transparent. Choosing from a number of different issues, I don’t know if you’ve heard of the six million dollar blunder in the Palo Alto Weekly. In that incident there could have been more transparency. These are public tax dollars that are being devoted to our school district. That’s just one example. So I would be committed to being as transparent as possible. For example … there is a two meeting rule. One of the reasons for the two meeting rule is that issues can be aired before the public, and they would have a chance to become aware of them, and to weigh in if they were interested in doing so. So that’s something that lends transparency to the process, for example.

I don’t think it’ll be a focus of my campaign. I’m hoping to work to make sure that our students come first. … Certainly with relation to sexual assault incidents, of course, making sure our students come first. … We have a very good school district with a lot of great teachers and a lot of great students. We just want to make sure that we’re trying to help our students excel and we’re being efficient and cost-effective in the way that we deliver that great education. We had these horrible incidents that came out that were mishandled, and of course I think in those cases our students were not well served, they were harmed.

I’ve always been interested in public policy and politics. I always thought of it as a way to make change, to make a difference in the world. And that’s why I majored in political science. … When I was playing tennis I served on the Women’s Tennis Association Board as an elected officer there. At one time I was the vice president. I served on a number of committees there and I also was elected to serve on the WTA Tour Board, which is the governing body of this board, as a player representative. So I think there are many life skills that translate to tennis and vice versa, from tennis to life. … You can’t win if you don’t play. You don’t win tennis matches by giving up.

Seeing as you served on the WTA, what do you think about the recent controversy concerning Serena Williams in the United States Open Final?

I think we all have to play by the rules. It was an unfortunate situation, but those were the rules.

Why should someone vote for you as opposed to the other candidates?

I am a different candidate in that I’ll be bringing an independent voice. I plan to bring common sense to the school board. I will be a watchdog. I believe our district should adhere to the laws and make sure that we support all of our students. We want our district to be very mindful and responsible when spending our tax dollars to make sure they’re efficiently and cost-effectively devoted to providing an excellent education for our students. … After all, these are our children, and this is our school district.

If you are elected, how will you balance your responsibilities as a board member with other activities such as work and family?

I would certainly try to do my best to balance those. Of course my family would take priority, but I’m fortunate at the moment not to be working outside the home, so I can devote time to the school board and trying to further those goals that we’ve talked about.

What do you believe should be the board’s most important responsibility?

I think the most important responsibility is representing its constituents by making sure that it does exercise oversight over the school district, and working to provide an excellent education and an excellent experience for our students, because they are our children.

Is there anything you hope your children or other children in the district learn from your campaign?