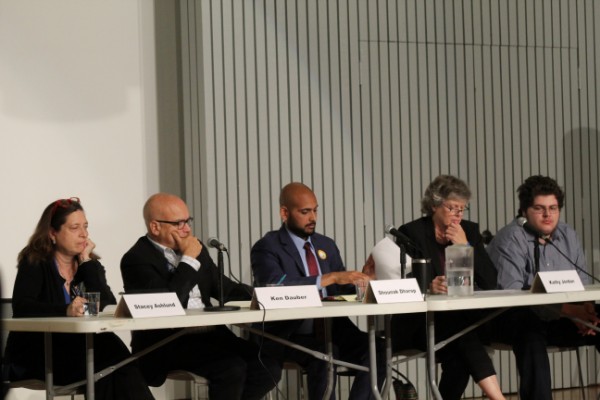 After a community forum hosted by the Palo Alto Weekly on Thursday at the Palo Alto Art Center, one thing is clear: each of the candidates for the Palo Alto Unified School District Board of Education is looking to bring big changes to the district.

Board candidates Alex Scharf, Kathy Jordan, Shounak Dharap, Stacey Ashlund and incumbent Ken Dauber were present at the forum. According to the forum’s moderator, the Palo Alto Weekly had asked board candidate Christopher Boyd to withdraw from the forum after a Weekly investigation found he misrepresented his afterschool science program, InSTED.

During the first third of the forum, the candidates answered questions from the Weekly.

One question probed the candidates’ ideas on solutions to Palo Alto’s achievement gap, which Smarter Balanced test results in 2017 indicated was still present.

Dharap said that for a public school district, providing education to all students regardless of socioeconomic status should be a high priority.

Dauber expressed agreement, noting that the achievement gap stands as evidence that there is still room for improvement in terms of educational equity.

“It is certainly true that under-resourced students in Palo Alto, low-income students in particular, suffer the largest opportunity gap,” Dauber said. “And those really are, in a sense, the ‘canary in the coal mine’ in terms of the effectiveness of our education.”

Ashlund said that involving students in mental health education from a young age would be a first step.

“Primarily, we need to involve the students a lot more, not just at high school, but starting in middle school and maybe even earlier,” Ashlund said. “Because educating students about their own well-being has to resonate with students.”

“I think a big part of this problem relies on the stigma of mental health, and that the first thing you need to do is raise awareness of the problem and get people to think about some of the things they can do to help,” Scharf said. “Once you get that it’s much easier to push forward anything else.”

During the second part of the forum, student journalists from The Paly Voice, The Campanile, Verde Magazine and Gunn High School’s Oracle approached the microphone and posed questions to the candidates.

Paly senior Ujwal Srivastava, an editor-in-chief of The Campanile, asked the candidates how they would improve transparency in the board’s decisions and processes.

“As a member of the board in particular, so that transparency and community involvement is increased,  I would really restrict waiving the two-meeting rule unless it is absolutely urgent and necessary,” Ashlund said. “It [waiving the two-meeting rule] has a huge side effect, which is that the community misses out on the opportunity to hear and see what is being presented.”

Dauber said he had supported transparency as a board member but didn’t think that the two-meeting rule had an effect on transparency.

“In general, I have been a strong advocate of transparency,” Dauber said. “PAUSD is the only body, as far as I know, in the state of California that has a two-meeting rule and I hope we have a chance to go into that at some point, but I don’t think that’s a critical tool for transparency.”

Scharf said that to increase transparency, the board should make sure that meeting minutes are clear and accessible.

“I think transparency is really important, and it goes back to some simple things, like the availability and ease of access to the reporting of the board meetings and the minutes of the board meetings being available and being accurate to a point,” Scharf said. “Going to the last board meeting … you had an hour of people talking about problems with the location of solar panels above their properties, and the only thing on the minutes was that these people talked about solar.”

Paly senior Nisha McNealis, a managing editor of The Paly Voice, asked the candidates about what kind of relationship they wanted to maintain with student press. McNealis noted in her question that Jordan had previously criticized The Campanile about its coverage of a sexual assault incident at Paly in October 2016, which The Campanile intially reported to be “determined to be consensual.”

In response, Jordan said that if elected, she would want to maintain a good relationship with the student press, but that the latter should maintain standards of professionalism and truthful reporting.

“Press freedom is not absolute,” Jordan said. “The press is not permitted to libel someone, the press has to maintain professional standards of journalism, the press cannot print just about anything. So, press freedom does have constraints placed upon it. And that’s the purpose of Ed Code 48907.”

Ed Code 48907, part of the California Education Code, states that students have a right to express freedom of expression as long as the expression is not obscene, libelous, or slanderous.

Dharap said that as a board member, he would emphatically support press freedoms.

“Absolutely,” Dharap said. “It’s kind of a no-brainer. The press is under attack across the country, and of all places in Palo Alto, where civic engagement and values that are in the First Amendment, freedom of the press and speech … those are paramount in our community. So, yes. I do pledge [my support for student press].”

Senior Kaylie Nguyen, another editor-in-chief of The Campanile, asked the candidates about their thoughts on the process behind the yearlong creation of Palo Alto High School’s new bell schedule in 2017, which was quietly replaced by a new schedule over the summer after it was found to not meet the state standard for minimum instructional minutes.

Ashlund responded by saying that the schedule creation process needed to be smoothed out.

“I’ve heard similar things when Gunn moved … to the block schedule as well, that we also lost instructional minutes. It sounds like a simple thing, but it’s quite a bit more complex, I think, than we know. Nobody intends to short-change the students in terms of their instructional minutes. And yes, the process of how these schedules are changed and determined does need to be transparent and efficient.”

Jordan also said that the board had erred in the schedule making process, in that an auditor had mistakenly reported the new schedule as being compliant when it was actually 21 days short in terms of instructional minutes.

“Well, we saw that the board didn’t exercise oversight,” Jordan said. “And so a schedule that was approximately 21 days short was allowed to be put forth. It’s unfortunate that the committee [Innovative Schedule Committee] spent all that time on it, but it was not compliant.”

The third segment of the forum consisted of questions from the audience targeted at specific candidates. To save time, the moderators directed each question at two of the five candidates.

One question, posed by a Paly student who did not give their name, asked the candidates how they would make students feel safe on campus in the wake of the sexual assault incidents in 2015 and 2016.

Dharap said that focusing on compliance and culture would be the first steps toward safer campuses.

“We should be doing everything we can to make sure students feel safe,” Dharap said. “I think that starts with, like I said, proactive compliance — making sure that we have processes in place so that laws aren’t broken. But the real underlying issue is the culture, really focusing in on building an atmosphere that supports every student.”

Jordan agreed, saying that student safety was a priority of every board member.

“We want all students to feel safe on campus,” Jordan said. “That’s the reason that I got more heavily involved 18 months ago. We also want students to feel that they can go to trusted adults on the campus who will then guide them and protect them and follow the laws, policies and procedures after they have an event take place. So we’re all on the same page about students feeling safe on campus.”

Election day for the Board of Education is Nov. 6.