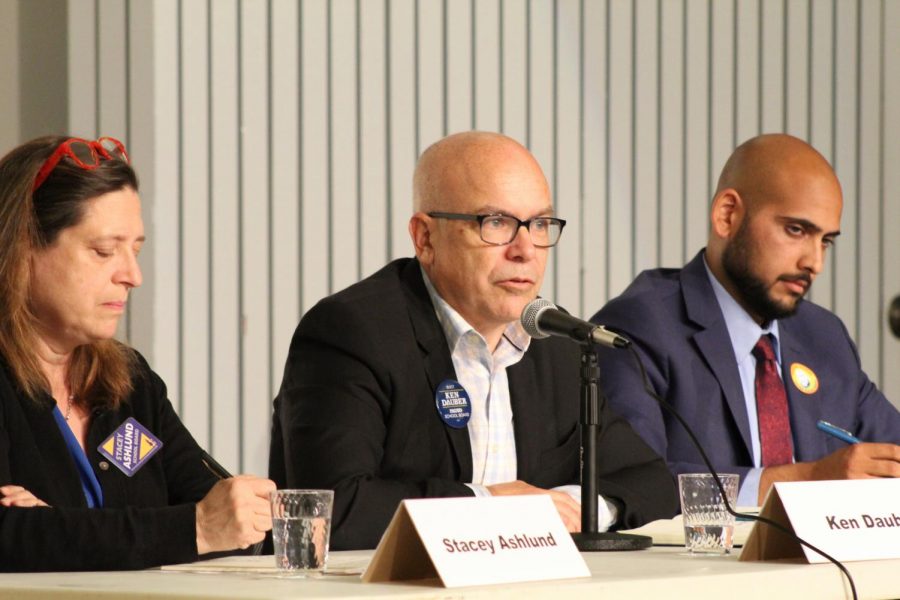 Candidate for the PAUSD Board of Education Ken Dauber discusses campaign issues at the school board debate on Thursday. Ken Dauber is the only incumbent running in the crowded 2018 election. “I think the most important thing for students and voters is to look at the values that I bring to the job,” Dauber said.Photo: Margaret Li

Editor’s Note: This is the fifth article in a five-part series about school board candidates.

From community activist to school board president, Ken Dauber is the incumbent lobbying for your vote in the upcoming Palo Alto Unified School District Board of Education race.

A wide range of community members have announced their candidacy for the two vacant board seats in the November school board election. Dauber, the current president of the school board, is the only incumbent running in the race.

“Student well-being is a really critical issue for me,” Dauber said. “I would like to see more progress on homework, on the amount of homework that students have and making sure that it’s consistent with the district’s homework policy.”

“I voted against a teacher’s contract several years ago that I thought wasn’t based on a careful analysis on recruitment and retention, and that overspent in trying to solve a problem that we really didn’t have, and by doing that created a budget deficit of $4.5 million that we’re still struggling with,” Dauber said.

While on the board, Dauber worked on reforming the district’s special education policies.

“I think that they [the district’s new special education team] represent real positive change from our leadership of a couple years ago, and I expect a much less conflictual and more cooperative relationship with families,” Dauber said.

Dauber originally ran for the school board in 2012 as a concerned community member, calling for improvements in student mental health and closing the achievement gap. After losing in the 2012 election, Dauber ran successfully in 2014, winning with around 30 percent of the vote, and secured a four-year term which expires this year.

Dauber made reforming the district’s Title IX policies one of the primary goals of his 2014 campaign. During the campaign, Dauber said he would work to repeal a board resolution criticizing the Department of Education’s Office for Civil Rights investigation.

“I ran to turn around the district’s performance on Title IX compliance, and I think that the district has made enormous progress in that area,” Dauber said, “It’s really night and day from what it was four years ago.”

Dauber is a PAUSD parent and software engineering manager at Google with a background in sociology. He has consulted for various organizations and agencies including the U.S. Department of Education, according to Dauber’s campaign website.

“I think I was a positive force on the school board in my first term,” Dauber said. “But I think there’s still a lot of work to be done.”