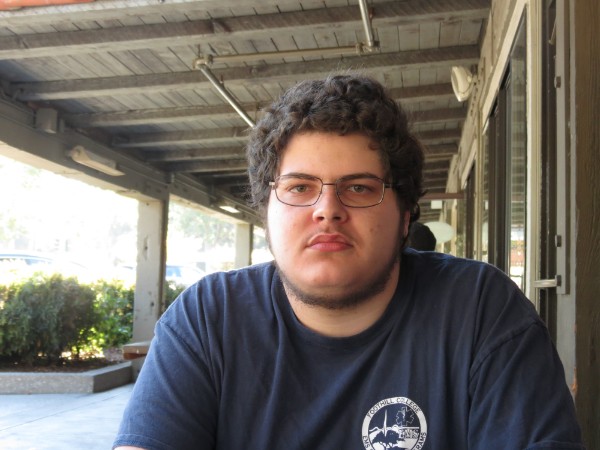 Palo Alto Unified School District Board of Education candidate Alex Scharf discusses his platform. Scharf wants to bring more staff accountability and third-party monitoring to the district, as well as a greater emphasis on content-based education. "A lot of rules are for bullying, mental health, sexual assault, or other things," Scharf said. "When those rules aren’t followed, the people that are benefitting from those rules suffer.”

Editor’s Note: This is the first article in a five-part series about school board candidates. Check back tomorrow for the next installment.

“In seventh grade, the counselor I had breached trust, so basically anything I said during the counseling meetings got passed on to the administration and the school system,” Scharf said. “I’m pretty sure it’s illegal to do that.”

Scharf, who is running for one of the two open seats on the PAUSD Board of Education, said that the incident permanently discouraged him from seeking counseling.

“Now, I don’t really do well with any counseling because of that seriously negative experience,” Scharf said. “I just don’t really trust them anymore.”

Scharf states on his campaign website that as he continued his education, he was met with prolonged bullying by both students and teachers. At one point, when he returned from a month-long stay in a hospital, he received no assistance in reintegrating back into school and was forced to hire a tutor.

Scharf graduated from Palo Alto High School as part of the class of 2015 and enrolled in Foothill College after taking a gap year. However, the negative experiences he had gone through during middle and high school stayed fresh in his mind.

According to Scharf, these systemic problems prompted him to consider running for a seat on the Board of Education.

“When people run, and people talk about the problems, a lot of people don’t address some of these things that I can see as really big problems,” Scharf said. “I don’t know whether they are intentionally looking away, or they just don’t see it from my perspective.”

Holding teachers accountable for their own actions is now one of the main focuses of Scharf’s campaign.

“There’s no consequence or any problems if anyone violates it [district policies],” Scharf said. “Even if people sue, it just gets transferred to the district. … It’s the district facing the consequences, the teacher who was responsible for the incident is very unlikely to face any consequence from that. … It’s a lot of work for the school district and nothing happens to the teachers, and I think some form of accountability for the teachers is necessary.”

As a part of accountability, Scharf said that he wants to make sure teachers know what to do when faced with reports of bullying or students with Individualized Education Programs, which provide educational support for students with special needs.

“We have staff training days, but I don’t necessarily know how useful they are and how they’re being taught,” Scharf said. “So it seems like one of the things they should be taught is what they are legally obligated to do, whether it’s how they should provide for an IEP, or how to treat bullying, or other stuff.”

Scharf also referenced the school district’s alleged mishandling of a sexual assault case in 2015 and the misestimation of property taxes in 2016, which cost the district almost $6 million, resulting from what he said was a lack of accountability among district staff.

According to Scharf, these mistakes prompted him to believe that a third-party monitoring system, such as the U.S. Department of Education Office for Civil Rights, could easily prevent similar incidents from occurring in the future.

Another issue that needs fixing is a system of teaching focused on getting a grade rather than content absorption, Scharf said.

“In Analysis, eight of my friends had the exact same tutor they went to, at the same time, and they had study sessions for the homework and tests and how it was going to happen,” Scharf said, referencing a junior-level honors math class at Paly. “It’s a public school. You shouldn’t have to teach to a level where you need resources outside of the school.”

Scharf said that these issues could be stemming from a school board that has lost touch with the community it serves.

Scharf said his unique perspective as a student who battled mental health issues and learning difficulties allows him to see problems that the other candidates might overlook.

“Going through Special Ed, I can see a lot of these problems,” Scharf said. “And for policies, they say they have all sorts of wonderful policies, but a lot of them aren’t implemented at all or very well.”

Scharf, who is studying part-time at Foothill College, is the youngest of the five candidates running.

However, he said that his lack of experience relative to the other candidates isn’t a problem.

“I’m not going to have all the experience, and that’s something that I can recognize,” Scharf said. “A lot of these people are 40 or 50 years old at least, and they have a lot of experience doing business and other jobs. … I don’t necessarily need to know everything. And I can bring my perspective and my ideas to balance out the board. … that’s the main thing.”

Scharf said that he will spend more time and have more commitment than other candidates, several of whom already have part-time jobs.

“I’m fine with not really doing much outside of being a board member because I think this is probably one of the biggest things I’ve done so far in my life,” Scharf said. “And so I’m fine with this being the main focus for now.”