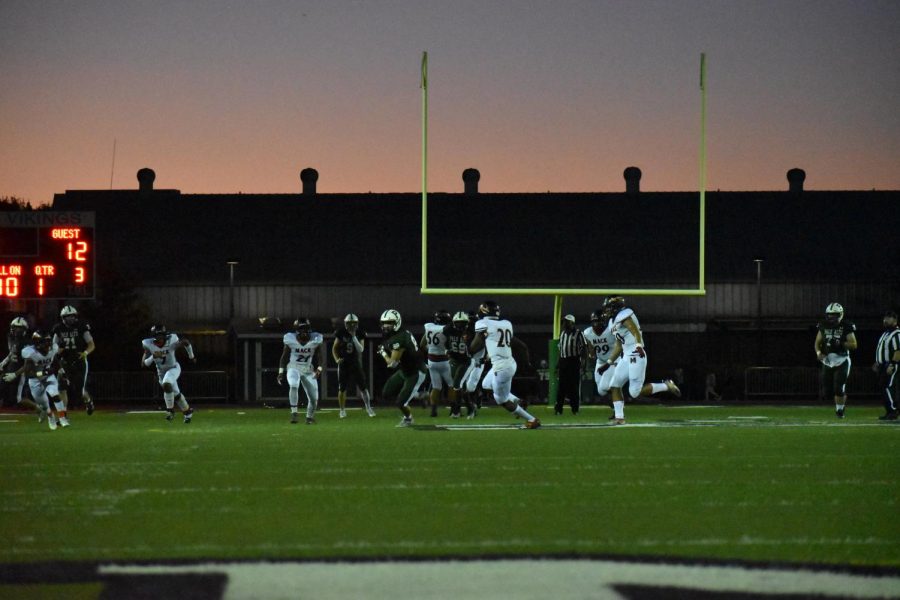 A kick-return touchdown to start the game, followed by an interception only a few plays later, didn’t seem to bode well for the Vikings.

But under the Friday night lights, the Palo Alto High School football team somehow managed to defeat the McClymonds Warriors 29-20 in an upset to the Oakland-based team, which won back-to-back Division V CIF state championships in 2016 and 2017.

With two early touchdowns, the Warriors took a 12-0 lead. But this deficit was eventually countered with an acrobatic, one-handed touchdown pass on 4th and 27 to receiver Jamir Shepard, narrowing McClymonds’ lead to five.

“The turning point may have very well been that fourth-down throw that Jamir caught one-handed,” head coach Nelson Gifford said after the game. “And in a one-possession game, that catch is a difference-maker.”

Back-and-forth scores followed, culminating in a game-clinching, 68-yard bomb from quarterback Jackson Chryst to receiver Paul Thie. With a successful extra point from kicker Tyler Foug, the Vikings raised their lead to nine, rendering the Warriors unable to tie the score in a single drive. With a final knee, the clock expired and the Vikings were victorious.

McClymonds, led by quarterback K’aun Green, continued to pound weak-side runs throughout the game, with the offensive line engaging the Paly defensive line and linebackers. It was the Paly safeties, then, who were forced to come forward with big tackles — in some cases, open field tackles.

But the Warriors also put up a show on the other side of the line, applying pressure on Chryst and somewhat containing Paly’s run game.

“Their defense is insane,” Chryst said after the game. “They’re fast, their linebackers fly to the ball, they’ve got good DBs.”

With this win, Paly set back McClymonds to its second straight loss after a 26-game winning streak.